Fans of the Spawn comic book may enjoy this game for the simple fact that it's the prettiest Spawn game yet, but all others should rent with prejudice.

In the past, Todd McFarlane's gritty comic book character Spawn has failed to make the transition from ink and paper to the pixels of video games with any sort of grace. Most attempts fall somewhere between bad and mediocre, much like the feature-length Spawn movie from 1997. The ever-aware McFarlane realizes that his comic book character has previously been misrepresented in video games and swears that he was more hands-on with this latest interpretation. Either McFarlane is far too busy or Capcom ignored his suggestions, because Spawn is only marginally better than previous efforts, and when this title is compared to other Dreamcast software, it falls short.

Spawn is a beat-'em-up with futuristic weapons. Instead of the usual one-player mission with a storyline and repetitive enemies, Spawn is set up like a tournament fighter. The gameplay is similar to Power Stone in that you fight in full 3D arenas with platforms and obstacles to jump on or hide behind. But unlike Power Stone, level interaction is kept to a minimum, attacks are limited, and objects may not be picked up and used as weapons. You choose one of 36 fighters from the Spawn universe and begin climbing your way up through the ranks, fighting boss after boss until you destroy the final boss, Malbogia. This usually takes just 20 minutes. After you have finished the game, a new fighter becomes available for play. You may also play against up to three friends in the battle royal mode.

The problem with Spawn is that, unlike the comic book, there just isn't enough meat to sink your teeth into. In the arcades where this game originated, Spawn has no problem munching the quarters with its linked cabinets, but at home the measly two modes aren't nearly enough. The fighting system is just far too simplistic. There are no combos, no special moves, and consequently no strategy involved. You continually shoot until a reload is needed and then shoot again. Bothering to take the time to jump and avoid attacks only results in death, as the enemies rarely miss. In the boss attack mode, simply standing back and shooting is usually more than enough to get the job done. If you happen to choose a character that has no projectile attacks, things can be a bit more daunting, but the ability to pick up the full health item any time makes the whole premise of Spawn seem juvenile. The four-player battle royals are fairly fun to play against friends, but they quickly turn into monotonous patterns of fight, retreat, get the full health item, and fight again. Whoever gets the first shot in is almost guaranteed to win, as you are frozen while being struck with bullets. This is a perfect opportunity for others to jump in and wipe you out.

Spawn's graphics aren't representative of its gameplay, as the dark tone of the comic comes slithering through. The animations of the characters are smooth and fast while still remaining predictable. The bosses, pulled directly from the comic book, look especially good, as each has an impressively high number of attacks, and they are built with plenty of polygons. The battle stages are enormous, with several different chambers to fight in and holes that drop down to completely unique areas. Despite all the weapons effects, such as enemies and large bosses fighting in the bulky arenas, the frame rates rarely skip a beat. However, there are camera issues that should have been fixed. For instance, sometimes the camera gets stuck behind the terrain or centers itself directly inside the body of a boss, completely blinding you to the action. In other instances, the camera pans out so far that it's difficult to see the small details like power-ups and weapons. The split-screen windows used for the four-player mode only make the situation worse. Often it's impossible to discern your fighter from the ensuing mayhem. The weapons and explosions tend to be on the bland side, but, considering all the action taking place at once, this is a problem most can live with.

The sound in Spawn is adequate but not great. While the same music plays the majority of the time, the sound effects almost make up for it. The weapon reports and attack effects are clear enough that you know if your punishment has been dealt, despite numerous other noises going on at the same time. The voices used for the different characters and bosses are especially good. This is something fans of the comic book will absolutely adore. Finally, they have a voice or grunt to place with the face. While Spawn is lacking 3D sound, the action is so furious that it's nearly impossible to notice.

Once you go through the boss battles a few times, Spawn's draw quickly dissipates. There are 24 characters waiting to be unlocked, but, by the time you've opened up your sixth or seventh, you begin to realize that the simplistic, repetitive gameplay is no longer enough motivation to continue. You can collect special items and weapons that are tucked away in each battle arena to open up images in a gallery, but again the reward does not warrant the work. Considering you're supposed to play video games, any piece of software that turns the gameplay into work is really not a good time. Fans of the Spawn comic book may enjoy this game for the simple fact that it's the prettiest Spawn game yet, but all others should rent with prejudice. 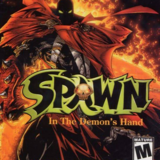 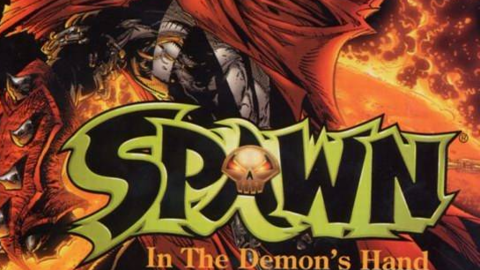 Spawn: In the Demon's Hand

Fans of the Spawn comic book may enjoy this game for the simple fact that it's the prettiest Spawn game yet, but all others should rent with prejudice.