Despite the use of much-loved Warner Bros. cartoon characters, Space Jam fails miserably in every category.

Space Jam is pretty simple. Aliens invade Tuneland and challenge the Tunes to an intergalactic basketball tournament. But it's not just any pick up game - the outcome decides their eternal fate. Thankfully, basketball hero Michael Jordan steps in to save the day. However, despite the use of much-loved Warner Bros. cartoon characters, Space Jam fails miserably in every category.

Space Jam takes the basic play mechanics of NBA Jam and combines them with some poorly executed cartoon-based sub-games. For the basketball action, players can choose between two teams, the Tunesquad or the Monstars, and select two modes of gameplay (two-on-two and three-on-three). The sub-games consist of searching for hidden items (in locker and trophy rooms), and a pathetic excuse for a space race with Speedy Gonzales. Successful completion of these sub-games can improve an on-court character's attributes: shooting, speed, and rebounding.

At best, the graphics in Space Jam look 16-bit. No 3-D polygonal characters or texture mapping here. The only redeeming aspect of the game is playing basketball with the Warner Bros. cartoon characters. As a plus, they're well-drawn and have some nice detail. Other than that, Space Jam is a basic 2-D, side-to-side basketball game. This is unfortunate, because plenty of Looney Tunes fans would have supported a graphically hep game. 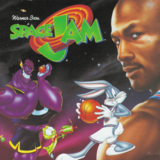