Space Hack mimics the hack-and-slash formula common to all action RPGs, but its budget price and sheer length don't make up for its dull pace and bland combat.

In Space Hack, you must single-handedly rid a huge colony ship of an alien infestation, one mutant bug at a time. The game unashamedly cribs from Diablo, and we're talking the 1996 original more so than the 2000 sequel to Blizzard's popular action/role-playing hybrid. So, much like the name implies, Space Hack is a fairly simple game about killing lots and lots of aliens, finding better stuff, leveling up, and navigating lots of big, sparsely detailed levels. It's got a decent enough presentation, and it's a really long game despite the budget price, but bad pacing and a lack of variety drag the whole thing down.

You probably figured the title Space Hack was in direct reference to the action in the game, but it turns out that Hack is also the game's main character. A name like "Hack" doesn't necessarily inspire much confidence, but in this case, Hack is supposedly the most capable and versatile human fighter remaining on the doomed colony ship you'll need to fight through. He's part of a small band of surviving humans who've holed up in a little base, and without much rhyme or reason, he'll be sent off to battle the alien hordes all alone using whatever weapons he can get his hands on. The game's story is presented with poorly translated onscreen text, so it really doesn't do much to establish what you're supposed to be doing or why you should care. Of course, the premise of fighting back droves of aliens is a good enough motivating factor on its own.

The game plays just like single-player Diablo as far as its controls and mechanics are concerned, with the only real difference being the fully 3D graphics and the ability to rotate your perspective using the mousewheel (useful for when walls or other large objects obstruct the isometric viewpoint). That means every few steps you take out in the wilderness, you'll be set upon by nasty aliens who'll either rush you or stand back and fire. By weaving from side to side, you can easily avoid ranged attacks, but since you need to stand still to attack, ranged assailants can quickly bombard you and take you out if you don't target them first. You move and attack by left-clicking on the mouse a lot, and if you're running low on health, you hit the H key to use a health shot to instantly recover. Since you can only carry a limited number of these shots, you're inevitably forced to scrounge for more or find a way to teleport back to base so you can buy some--and also repair your shoddy gear, sell the stuff you've picked up, and maybe buy some new stuff. That's more or less what you do in Space Hack for countless hours until you've made it through the dozen-odd biospheres composing the ship.

Unfortunately, Space Hack doesn't achieve the same fine balance as the games it emulates. What makes for an addictive action RPG are the sensations that you're constantly becoming stronger, constantly finding better and better equipment, constantly encountering new types of foes, and constantly exploring new types of places. Space Hack does a pretty good job keeping the level variety going since each of the ship's biospheres has distinct-looking areas. However, you'll feel like you're killing the same few bugs over and over for hours on end, the process of gaining experience and leveling up is slow, and you'll constantly be taunted by random equipment that's way out of your league. When you gain a level, you get a few points to distribute between Hack's core abilities, which include strength (tied to melee combat) and knowledge (tied to ranged weapons and some special abilities). You can also find biochips, equivalent to magic rings and necklaces and such, which can boost your ability scores or resistances. But even so, it can take what seems like forever to work your way up to a decently upgraded weapon. There's really not enough variety to the weapons or combat anyway, especially since you can't effectively concentrate on both melee and ranged weapons. Both seem viable, but unless you pick one route or the other, you might not be powerful enough to survive the game's tough, nonstop fighting.

Most enemies are a cinch to kill, even in groups, but every now and then you'll run into a bigger, possibly glowing critter that will hurt you very badly with every hit. Since there are a finite number of enemies (albeit a lot) in each region, and since leveling is slow, you can't just keep fighting to the point at which these tougher bad guys become easy to take down. So instead, the tactic in Space Hack forcibly becomes taking careful steps into the unknown, drawing out enemies in the smallest possible groups. Provided you keep going back to base for more health shots, you can conceivably kill pretty much anything in due time--but when the process becomes painstaking, it stops being fun. Space Hack occasionally throws some side quests and other basic twists at you, but it's not enough to alter the basic, and rather sluggish, flow of how you progress through the game.

The fully 3D graphics are modest by today's standards but work well enough for the game. Alien corpses litter the landscape once you're done hacking your foes to bits, and some decent lighting effects for things like energy weapons and rundown terminals help give Space Hack some atmosphere. The game also runs quite well--even when you're faced with lots of enemies at once, and even on fairly old systems. As for the audio, Space Hack has some understated ambient music that's easily ignored since the soundscape is dominated by the twittering and splatting of aliens and Hack's one same groan, which you'll hear over and over as you inevitably take damage. The game really doesn't sound like much.

Space Hack has all the basics you'd expect from a science fiction-themed Diablo clone, and the budget price helps make it more enticing on the whole. But despite the sheer length of this action RPG, which could theoretically keep you occupied for hours and hours, the highly repetitive content and the fairly punishing gameplay just aren't particularly gratifying. That makes Space Hack just as easy to put down as it is to pick up. 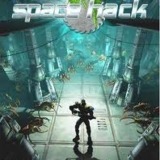 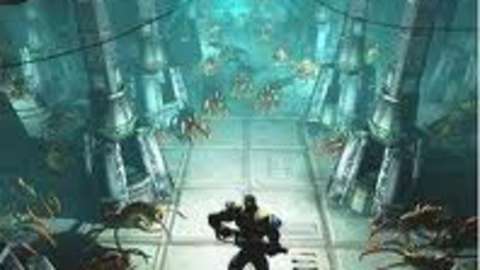 Space Hack is a Diablo-style sci-fi game with role-playing and action elements.