Space Channel 5 Special Edition is a little rough around the edges, but Ulala's still swingin' after all this time.

Every so often you run into a game that's a little short on gameplay but so long on quirky appeal that you can't help loving it. 2000's Space Channel 5 for the Dreamcast was exactly this kind of game. It starred Ulala, a sexy space cat who lit up the universe with her own snazzy galactic news program, Ulala's Swingin' Report Show. The game was extremely short and featured simplistic Simon Says-style rhythm gameplay, but its music, characters, and overwhelming style were so endearing that it all worked beautifully. The series continued in Japan with the release of Space Channel 5 Part 2, but that game never made it to the US. Until now. Thankfully, Agetec has picked up where Sega and developer United Game Artists left off and has now repackaged both the original Space Channel 5 and Part 2 into a new budget-priced compilation. The games haven't undergone any modernization, and it's a pretty bare-bones package overall, but don't fret. Space Channel 5 Special Edition may be a little rough around the edges, but Ulala's still swingin' after all this time.

Both Space Channel 5 games are about as simple as rhythm action games get. In the first one, Ulala and friends will have to take on the Morolians, crazy aliens that are attempting to bend humans to their own style of dancing. In the second game, Ulala's up against the Rhythm Rogues, a mysterious band of dancing ne'er-do-wells with nefarious plans for the galaxy. Once you begin, actually playing the Space Channel 5 games is quite simple. You watch Ulala strut around all kinds of snazzy-looking '60s-style spaceships and alien worlds, and when she's challenged to a dance-off by her groovy adversaries, you simply have to mimic the other dancers' moves by tapping the appropriate directions and buttons (up, down, right, chu) in time with the music. This is extremely easy in concept, but it can be pretty tough to master during the actual game when the music speeds up and the enemies issue lengthy dance sequences.

The gameplay in the original Space Channel 5 is extremely straightforward--it never deviates from simply making you follow basic directions and button presses--but Part 2 introduces some new ideas into the mix. For instance, you'll sometimes have to hold down a button for a certain amount of time rather than just tap it. There are a few other additions to Part 2's gameplay, such as the inclusion of lyrics to some songs that you have to work your moves around. A particularly amusing sequence even sees Ulala and rival reporter Pudding grabbing electric guitars for a jam session, and this bit doesn't even require you to press specific directions as long as you press any direction with the proper timing. You'll also get a few side modes, such as a simple two-player mode and an endurance mode, in the second game, and these help to flesh out the replay value a bit. Overall, SC5 Part 2 adds enough neat little twists to the first game's basic gameplay that it's pretty new throughout, though the lyrics feel a little tacked on and can sometimes make it really hard to time your moves properly. And despite its age, even the original game is still pretty darn fun as rhythm action goes.

It wouldn't be fair to say that the graphics in either of the Space Channel 5 games have aged all that well from a technical standpoint, although they don't look glaringly bad. The first game used full-motion video backgrounds with 3D characters superimposed, while the second one thankfully went fully 3D for a more cohesive look. All of the 3D stuff in the game looks pretty dated by today's standards, but it's definitely not something you'd call offensively ugly. And besides, to focus on the technical shortcomings of these older games is to ignore their humongous and overwhelming style. Everything in the games screams gaudy '60s space kitsch, from Ulala's pink hairdo and snazzy rubber outfits to the goofy Morolian designs and colorfully wild backgrounds. The games may lose points for looking so old, but they win them back by looking so cool.

Of course, the sound is a huge factor in any rhythm game, and for the most part Space Channel 5 SE doesn't disappoint. The music in both games is really good and perfectly suited to the action. The first game's music is mostly just a variation on the extremely catchy song heard in the first level (which is itself based on the extremely catchy "Mexican Flyer"). Part 2 does a much better job of introducing original music in each level, and you'll hear a lot more diversity in the styles of music; one boss has you fighting against a waltz, for instance. Less consistent than the music is the voice acting, which is fine in the first game, thanks to the obviously larger localization budget it received, but not so good in the sequel, presumably since it was never released in the US by its original developers. Ulala's voice actress is good throughout, but some of the voices in the second game (including the song lyrics) will make you groan. It's too bad the voice work couldn't have been more professional throughout, but it beats not getting the game in English at all.

Played from beginning to end, both of the Space Channel 5 games are extremely short--you can finish them both in less time than you'd spend on one game of average length. But the good music and intense style make them replayable, and there's a respectable amount of stuff, such as character profiles and Ulala costumes, that you can unlock. There's also the matter of the game's price, which at release is an extremely budget 15 dollars. At that price, any PS2-owning rhythm action fan shouldn't feel too bad about adding this unusual and endearing game to his or her library. If you're not a fan of the genre, this won't do anything to win you over, but it's charming and solid for what it is. And if nothing else, SC5 Special Edition is also notable as the last time we're likely to see Michael Jackson starring in a video game. 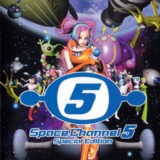 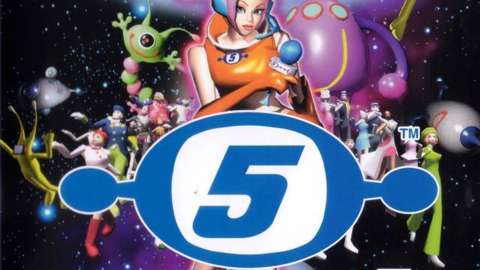 Space Channel 5 Special Edition is a little rough around the edges, but Ulala's still swingin' after all this time.