The idea behind this South Park-licensed kart-racing game is that the fine citizens of South Park commemorate every holiday by holding a go-cart racing event. These events range from straightforward races to events in which the goal is to hold on to an item for a certain length of time. For example, on Valentine's Day, everyone assembles at Big Gay Al's place to shoot one another with Cupid's arrows. The catch is that there's only one bow that the racers must fight for control of by bumping the driver who has it, all the while trying not to get shot. Once you get the bow, you must get enough distance between yourself and the other drivers so you can get off a few shots without losing it. These non-race events have a similar setup, which makes the gameplay extremely fast paced and even frantic at times. To help you fend off or prevent the other racers from passing you or taking away a key object, the levels are filled with an arsenal of offensive and defensive weapons and items. Items like dogs, cats, and alien lasers can stall your opposition for a brief period of time. There are also objects like the Terrance and Phillip boxes that are filled with gas, giving you a momentary speed boost. You can even pick up Mr. Hanky, who patrols around your vehicle, keeping you free from harm for a limited time. So while the game's kart-styled items setup may sound like that of previous games in the genre, it's really South Park Rally's overall gameplay and control that keeps it from measuring up.

While fairly fun for a couple of minutes, the gameplay is quickly debilitated by poor control and physics, which make the game hard to play. The biggest problem with the control is the vehicles' turning speed. If you get yourself in a tight situation where competitors are coming right at you, you might as well just take it head-on, since turning around takes forever. You do have a braking feature that allows you to take tighter turns at higher speeds - however, this doesn't help you at all when you're stopped or going slow. Another problem is getting your vehicle back on its wheels after it flips, which happens a lot since the car physics are way too floaty, resulting in vehicles that bounce all over the place.

Graphically, South Park Rally on the Dreamcast obviously looks better than its N64 and PlayStation counterparts, and it certainly captures the flat, unrefined visuals of the show. However, compared to other Dreamcast games, the level of detail, 3D models, and the general quality of the graphics are noticeably below par. The one exception is that all the characters and their vehicles look fairly true to the show. As are the raunchy quips from the characters, which, while funny at first, become quickly tiresome as the variety of phrases is extremely limited. 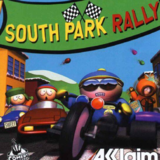 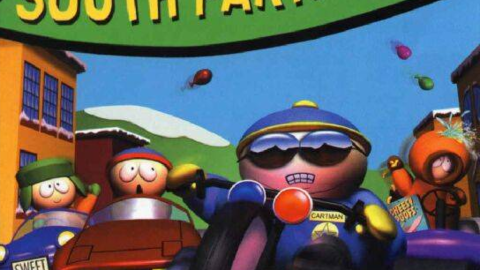