The Luv Shack is a little old place where we can get together. Now that the token B-52s reference is out of the way, South Park: Chef's Luv Shack is essentially You Don't Know Jack about South Park, with the addition of some old arcade games disguised as South Park-themed minigames. The result is a trivia game that can be amusing sometimes, but its lame minigames, lack of varied speech, and generally slow pace make for short-lived fun at best.

Luv Shack is set up like a gameshow hosted by everyone's favorite chef, Chef. Chef offers you a choice of three trivia categories at a time. The categories manage to be pretty funny and include topics like "Sucks or Canadian," "Giant Japanese Monster Bad," and "The 1991 Denver Broncos." The questions are occasionally funny; for instance, "The rock band Loverboy: Sucks or Canadian?" The correct answer is both, of course. But after two or three days of casual play, you'll start to see some questions repeated. Speaking of repetition, the game's speech gets old pretty fast. It uses all the real voices from the show, but there isn't enough variation. The game's intro is the same every time, the announcer says the same things, and so on. A few different intros and an assortment of quick jokes would have gone a long way toward lending the game more variety. In addition, although the loading times are relatively brief in Chef's Luv Shack, they're long enough to really break up what should be a fast-paced game. Having to wait between questions and minigame rounds has a noticeably detrimental effect on the overall flow of the game.

The minigames themselves are very basic. Some take on elements of classic arcade games like Asteroids, Warlords, Super Sprint, Tapper, and Kickman. Others just force you to pound buttons, so dig out that old keyboard that's been collecting dust in your closet or you'll find yourself pounding your good V key until it disintegrates. After you see each of the minigames even once, you'll probably wish there were a way to disable them altogether. The game's warped sense of humor and the trivia questions themselves are the main attractions, whereas the minigames really take away from the game's overall quality. Visually, the game looks just as you would expect it to look. The simple style of the South Park characters is well represented, and the animation also closely mirrors the show, even in the minigame rounds.

Fans of South Park who also happen to like trivia games would be better off keeping their two passions separate than indulging in Chef's Luv Shack. The game just isn't anywhere near as good as You Don't Know Jack; the questions are only funny the first two times you hear them, the minigames are completely uninteresting, and the repetitive speech is a real drag. 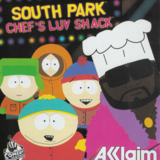