SoulCalibur V is the most complex entry in the series to date. By incorporating some 2D fighting mechanics into its 3D weapon-based system, the game forces you to manage more variables than ever before. In short, this is not a return to the simple times of SoulCalibur II. What SoulCalibur V lacks in accessibility it more than makes up for with its unprecedented depth, fostering a well-crafted, offensive-focused experience that never wants for excitement.

Brave edge attacks are improved versions of a character's normal attacks and use one-quarter of the critical gauge. Hilde, for example, has an attack that knocks her opponent into the air and over her head. The brave edge version starts the same way but automatically impales the opponent in midair for extra damage. This combo isn't possible otherwise, hence the meter cost. Both critical and brave edge attacks open up new combo possibilities for the entire cast and help make old characters feel new without altering their fundamental gameplay.

Defensively, the critical meter is used for guard impacting, otherwise known as parrying. That's right: unlike in previous SoulCalibur games, parrying is no longer free. Instead, it costs one-quarter of the gauge--the same as a brave edge attack--and still requires precise timing.

However, there are other ways to parry that don't use the critical gauge. The first is "just guard." This is done by tapping the guard button the instant before being struck. It requires even more precise timing than a standard parry, but if you're successful it will have a similar effect. Certain attacks also incorporate a parry into the attack itself. These attacks are generally slow-moving, highly telegraphed blows that will leave you wide open should you miss.

Guard breaking also discourages defensive-heavy play. Block too many attacks in a match, and your character will automatically drop his or her guard for a few seconds. You can tell you're at risk when the health gauge begins to flash. All of these changes create more intense matches by restricting defensive options and promoting aggressive play. However, the game also keeps itself in check through the limitations of the critical gauge. Since the gauge can hold only four quarters total, and refills slowly as you fight, you can't abuse the new techniques. It's a finely tuned balance that fits naturally atop the existing system.

With all these new additions, there is a lot of information to internalize in SoulCalibur V. What this game desperately needs is a cohesive tutorial to guide you through these changes. Instead, the only tutorial is a screen of text displayed at the opening of story and training modes. That's it. This sink-or-swim mentality is conducive only to a minority of players and is a disservice to newcomers and returning fans.

The game's starting point, the story mode, introduces you to Patroklos and Pyrrha, the children of series veteran Sophitia. The siblings embark on a journey across Europe that leads to the legendary soul swords. Eventually, the two are put at odds, but by that point the narrative has stumbled over so much terrible writing and illogical reasoning that it's difficult to care. This mode also fails to provide any of the interesting battle conditions seen in SoulCalibur II's campaign or SoulCalibur IV's challenge tower. And while the game has two other versus AI modes, the lack of variety across all three severely diminishes the game's offline attraction.

SoulCalibur V takes place several years after the previous game and borrows a page from Street Fighter III: Third Strike. It introduces several new characters with the slightly modified movesets of older characters. There are a few originals as well, such as Z.W.E.I. and Viola. Z.W.E.I. is a short-range fighter who can summon a familiar to help extend combos and attack from a distance. Viola is an indirect fighter who uses a crystal ball. The ball can be deployed on the battlefield and recalled to strike opponents from behind.

Ezio Auditore, of Assassin's Creed fame, is this game's guest character. In addition to being an appropriate thematic fit, Ezio is well-balanced, capable of holding his own but not overpowered like some guest characters of the past. Sadly, a lot of good characters were left by the wayside, including Talim, Yun-seong, and Zasalamel.

Online play is smooth in SoulCalibur V; you shouldn't notice any performance issues when squaring off against players with four- and five-bar connection ratings. The standard offerings of ranked and player matches are available, and the game saves your eight most recent online matches. You can also check out other players' online profiles and download any replay data they've made available. Together, these are great ways for studying combat technique. Player matches support spectator mode when you're not playing, and you can even chat with other viewers.

A fan favorite, character creation, is back in SoulCalibur V and is more robust than ever. Not only does it offer all the features you would expect from previous iterations, but now you can apply patterns to your characters' garments, add tattoos, or attach special items. There is also a unique unarmed fighting style that can be accessed only within character creation that's a nod to another Namco fighting franchise. In addition, characters no longer have stats that are tied to pieces of clothing, so you're free to dress up your fighters however you'd like.

Fans looking to relive the experience of SoulCalibur's early entries may be irked by this game's new additions. But once the steep learning curve is surmounted, you will find a fresh-yet-familiar fighting system that's fun to explore.

Editor's note: This review originally stated you could not access replays from other players, which is incorrect. The review has been amended accordingly. GameSpot regrets the error.

View Comments (61)
Back To Top
7.5
Good
About GameSpot Reviews 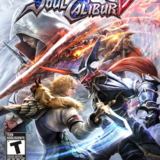