Many games require decision making, but Soul Sacrifice emphasizes choice more than most. Everything, from the abilities you possess to the monsters you battle, is subject to choice: to save or to sacrifice? This notion is ingrained in both story and character progression, presenting you with limitations and dilemmas that make this grim monster-hunting game very appealing. Decision making alone isn't the only reason to give Soul Sacrifice a try. It's rich with evocative characters, has creatively fiendish enemy designs, and is coated with an effective layer of gloom and doom. Pleasingly, the captivating presentation and narration overshadow the game's repetitive tendencies, and the weight of every decision makes the otherwise straightforward action a truly thought-provoking affair.

Before your journey begins, you're locked away in a cage made from flesh and bone, awaiting sacrifice at the hand of the ultimate sorcerer, Magusar. A mysterious book, the chatty Librom, emerges from the remains of the sorcerer's last victim. Part necronomicon and part snarky companion, Librom is your portal to the past of Magusar's former partner, and through it, you experience Magusar's rise to power. As the game's quest hub, customization menu, and glossary, it's an inventive approach that suits a portable game quite well. The lack of an overworld is odd at first, but since you're a prisoner, it makes sense in context.

While reliving the life of a sorcerer once sworn to hunt possessed humans and animals, your primary charge is simple: defeat and sacrifice your enemies in order to rid the land of foul beasts. You trudge through rotten wastelands to frozen caves, casting spells, pummeling enemies, and dodging incoming attacks while managing your limited pool of resources. Every mission has clear-cut conditions; you must defeat a set number of common enemies, locate hidden items, or topple horrific archfiend juggernauts. In order to surmount the often difficult campaign missions, you're often forced to beef up your character by undertaking optional Avalon Pact missions. This is unfortunate, since most Avalon Pact missions lack challenge or variety, especially in the first half of the game. It's a blessing, then, that there are so many interesting side stories peppered throughout to distract you from the repetition at hand.

You head into every mission with a set of six abilities, or offerings, ranging from melee weapons to summon spells. You start with a small selection, but every mission rewards victory with new offerings based on your performance. An offering can turn your arm to stone, heal your party, trap your enemy, and even stop time. Without a stock of offerings, all you can do is run. Offerings can be used only a certain number of times during the course of a single quest, though sacrificing enemies and tapping into one-time-use environmental pools lets you replenish an individual offering's cast count. If, however, you get sloppy and sacrifice all of a particular offering during the course of a mission, you must wait until the end before replenishing your ability to use it.

Coordinating the relationship between your various offerings is critical during the challenging archfiend battles, and losing access to just one is often enough to tip the scales in your enemies' favor. You could carry more than one of a particular offering into battle, but it's better to diversify your capabilities. Thankfully when you possess multiples of a single offering, you can sacrifice the extras to boost the cast count of another. Like most actions in Soul Sacrifice, this action carries ramifications. The decision to boost an offering's cast count diminishes your resources for fusion, a process that lets you create completely new and advanced offerings. Fusing offerings isn't critical to success, but it gives you a chance to delve a little deeper into the elemental variations for most of your existing inventory.

Once an enemy is defeated, it's up to you to choose whether to save or sacrifice its soul, permanently boosting either your stamina or strength stat, respectively. Souls also act as replenishments during battle: sacrifices refill some of your offerings, and saved souls restore a bit of health. The decision usually comes down to your needs at the time, but the smart player will take the time to coordinate their decisions. Since your choices effect skill levels, you may find that too many snap decisions shape your character's traits in ways you never intended. However, outside of a few pivotal instances, your decision bears little weight on the story at large.

While you don't have equipment in the traditional sense, you can equip sigils, which are symbols carved into your right arm. When you defeat enemies and absorb their soul shards, new sigils are unlocked. Each sigil has two conditions attached, but the second becomes active only when you've struck the proper balance between sacrificing and saving your enemies, reflected by the affinity of your arm, and determined by your tendency to save or sacrifice.

Like gathering new offerings for fusion, you may find yourself in the unfortunate position of having to grind through old missions to acquire the right ingredients to produce a new sigil. That's not so bad, but limiting certain abilities to your arm's affinity seems unfair given how it's managed. You have to spend resources on lowering your life or magic levels, and then replay missions in order level up the opposite levels. Sacrificing items and resources is one thing, but asking the player to sacrifice hours of hard work takes the notion of sacrifice a bit too far for the game's own good, especially when you consider the repetitive nature of most missions.

When the going really gets tough in combat, you may execute dark rites: extremely powerful spells that come at the cost of your body and stats. Casting infernus, for example, burns your skin while releasing a powerful inferno that engulfs the entire map, hitting enemies for a ton of damage, but also halving your defenses. While a dark rite may save your hide and help you complete missions, it comes at a price that gets steeper every time you pay it.

The only way to undo the act is to spend lacrima, which are tears shed from Librom's large, weepy eye. Librom is constantly building up lacrima, but you may only harvest it between missions. On top of undoing black rites, lacrima will reinstate depleted offerings, rewrite quests with multiple outcomes, and remove either magic or life levels. The cost of restoring a black rite grows with every use, discouraging you from using it unless absolutely necessary. So you may conduct a dark rite that saves yourself from losing progress, and find yourself stuck with a harsh penalty for the next half-dozen quests as you wait for your lacrima to replenish. It's a punishing process that really makes you think twice before resorting to a quick fix during a tough conflict, and it's one of the better applications of sacrifice within the game.

The allies you save can join you during Avalon Pacts, and so too can other players through local and online co-op. Playing online is simple: rooms are established with a custom name, an optional password, and restrictions to certain play styles or Avalon Pacts. You can communicate with your fellow teammates through simple ready-made text strings, but if you're playing with people on your friends list, you can also tap into the Vita's Party app to enable voice chat.

Teaming up with higher-level players can make the occasionally difficult Avalon Pacts easier, obviously, but it's also possible to defeat the entire game without touching co-op. Unless you have a group of established friends to play online with, multiplayer doesn't have the same draw as solo play. Quite often, other players are busy chasing their own goals in battle, and the means of communicating with people outside of your friends list leaves little room for negotiation.

If you don't have what it takes to overcome your enemies, there's still life after death. You can prompt your offline or online allies to sacrifice your soul, unleashing a powerful attack in the process, but they can also bring you back to life at the cost of their own health. You may also choose to simply die, which opens up an interesting means of participation. When dead, you can tap on enemies or fellow sorcerers with the touch screen to weaken or strengthen their abilities respectively. For sorcerers in over their heads, this is an effective way to contribute to the cause without feeling like a waste of space, and an inventive use of the game's take on life and death.

You won't find an epic saga within Librom's pages, but you will encounter an eclectic cast of sorcerers and monsters. Tragic tales of sacrifice between family members and lovers is common, as is an occasional sorcerer driven to madness, warped by the memories of sacrificed victims. These moments are illustrated through motion-comic cutscenes, brought to life through hues of red and values of black, and narrated by an effective and believable cast of actors. It's a shame that the story of the fellow sorcerers--often the most interesting and poignant tales regarding sacrifice--are bitterly brief. Magusar's story is the only one that avoids the pitfalls of brevity, but moment to moment, it fails to provide the same sense of satisfaction.

When approaching Soul Sacrifice, you need a bit of patience to get into the meat of the game. The systems at play are immediately confusing, but after the first couple of hours, the game eventually deals out the necessary info when it counts. Many action games fall into the realm of mindless button mashing with little motivation to consider your actions, so it's refreshing to see Soul Sacrifice take the opposite approach, emphasizing the themes of consideration and sacrifice at every turn. No doubt, thoughtful players will be rewarded with power, while the impatient will be met with frustration.

Delving into Magusar's story unveils a world rife with tragedy. It's rare to see a game embrace the horrible so wholeheartedly. In a way, it's a good change of pace. While it's impossible to overlook the repetitiveness of some quests, the grotesque environments and enemies keep things visually interesting. It's not without its problems, but Soul Sacrifice's strong identity and rewarding commitment to the decision-making process are reason enough to try your hand at ridding the land of foul archfiends. 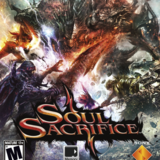