IMPORT: Sorcerian is bad. Any fond memories of the original games will quickly be cast aside when you play the Dreamcast incarnation.

In keeping with the current trend of updating classic games, Falcom has updated its Sorcerian license with a new installment on the Sega Dreamcast. The original game hailed from a simpler era, but Falcom has failed to bring its current Sorcerian game up to modern-day standards.

Sorcerian, like its predecessors, is more of a dungeon hack role-playing game than one of today's story- and character-driven epics. You assemble a party of four characters from the D&D character stereotypes of yore, naming each and distributing a handful of points among various stats. From there, it's to the adventurer's guild, where you select one of three quests to begin your (hopefully) prosperous adventuring career. Upon completing the initial quests, more will open up, eventually revealing more than 20 quests in all. While a loose story ties these excursions together, most of the game's stories are contained entirely within their respective quests. After selecting a quest, you are dropped into an area that is no doubt cursed or infested with monsters. To complete a quest, you run about willy-nilly searching for keys, waggling your sword at monsters, and talking with the game's wide variety of afflicted townspeople. Sorcerian is boring and unrewarding, not to mention unforgivingly difficult, ugly, and a chore to control.

Sorcerian's control is ludicrously oversimplified in addition to being ludicrously ineffective. In addition to running around in a disorientingly inertia-less world, all your characters perform a set attack at the same time with a single button press. This looks stupid, and only one character is ever likely to connect with whatever is being attacked. If you plan on hitting with more than one enemy, you'll end up taking damage. Healing is also available with another button, and it's more appropriately accessible, but it doesn't make up for the innumerable cheap hits your party is going to take. Sorcerian isn't a fun game to start - with limited healing options and cheap hits galore, your inexperienced heroes-in-training are likely to die early. This brings us to another of Sorcerian's weaknesses: death. In the world of Sorcerian, life isn't so cheap that it can be restored with a simple item. Once you're dead, you're dead until you return to the town and try to revive your character in the church. This, however, is expensive, and you are penalized for leaving a quest before it is completed. There's always the option of chucking the corpse and creating a new character, but this is time consuming, and most people will probably opt to turn the game off at this point.

All of this is done in a real-time world, viewed from either an overhead or side perspective, created with the ugliest 3D to grace the Dreamcast. Easily below the worst of the Dreamcast's first-generation graphics, the visuals in Sorcerian are in no way appealing. From the laughably modeled environments to the hordes of squat, low-poly people and monsters, Sorcerian is an eyesore beyond any in recent memory. Sorcerian's music is a little better than the graphics, equipped with fairly well-arranged, exceedingly generic fantasy background music. The game's sound effects are practically nonexistent, save for a few snippets of recorded witch cackling and other dialogue.

Sorcerian is bad. Any fond memories of the original games will quickly be cast aside when you play the Dreamcast incarnation. From poor control to abysmal graphics, Sorcerian doesn't have a single thing going for it other than the nostalgic leftovers from the series' now-poisoned legacy. 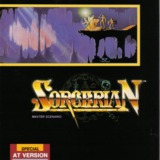