It's a worthwhile ride, and one that any serious Sonic fan should definitely take.

You wouldn't expect Sega to put its flagship character on a non-Sega system, but here it is. Sonic the Hedgehog: Pocket Adventure has the design style of the older Genesis and Game Gear Sonic games, and overall it delivers the same high-speed platform adventure that made Sonic a household name.

The cookie-cutter Sonic story is used here yet again, so sing along with me: Dr. Robotnik wants to get the Chaos Emeralds so he can rule the world, so it's up to Sonic to get them first while he frees trapped animals along the way. To accomplish this, Sonic runs as fast as he possibly can from level to level, jumping on the heads of enemies along the way. At the end of every world, you'll face Dr. Robotnik in one of his many forms before moving on. The game also has bonus levels, which is where you actually earn the Chaos Emeralds. These bonus stages have the same behind-the-back-perspective running levels seen in Sonic 2 on the Genesis. All the levels in the game are new, but preexisting level concepts have been used throughout the game.

The game has a multiplayer element, letting you link up and race through the levels. Also new to Pocket Adventure is the puzzle area. Throughout the game, you'll find puzzle pieces hidden in every level. As you collect the pieces, you can assemble them into pictures.

Graphically, Sonic looks great. The levels and characters look slightly better than they did on the Game Gear. The game runs as fast as you'd expect a Sonic game to run, though there is some occasional slowdown, usually occurring after you get hit and causing your ring collection to fly all over the screen. The soundtrack is excellent, and the game even has the famous Sega startup speech that adorned most of the previous Sonic games.

Sonic Pocket's only serious flaw is that the game is over too quickly. Anyone who still has his Sonic chops in decent shape should be able to cruise through the game in a few hours, collecting around half of the puzzle pieces along the way. The save-game system, which lets you start on any level that you have already played, makes the game seem even shorter. But it's still a worthwhile ride, and one that any serious Sonic fan should definitely take. 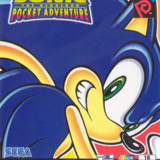