This faithful but inconsistent throwback to the earliest Sonic games mingles high-speed thrills with a few too many frustrations.

Sonic the Hedgehog hasn't exactly been absent from the realm of video games since his debut on the Sega Genesis, but there hasn't been a proper entry in the original series of Sonic games since 1994's Sonic & Knuckles. Finally, the first official sequel to those games in 16 years is here. Sonic the Hedgehog 4: Episode 1 is, for the most part, a faithful follow-up to Sonic's earliest games, and in its best moments, it captures the joy and exhilaration that a good Sonic game is capable of delivering. Unfortunately, it doesn't manage to do this consistently, and too many dull and frustrating moments keep this from being a worthy successor to those classic games.

Sonic's kooky archnemesis Dr. Eggman just never learns. Once again, the despicable mad scientist is searching for chaos emeralds and cruelly imprisoning bluebirds, bunny rabbits, and other adorable creatures in his deadly machines. There's essentially no story in Sonic 4 beyond the basic idea that as Sonic, you're trying to defeat Dr. Eggman and collect the chaos emeralds yourself. And that's fine; the game doesn't need a rich narrative to support its side-scrolling platforming action.

In addition to the running, jumping, and spin-dashing moves Sonic had in his repertoire way back when Sonic & Knuckles was released, Sonic 4 lets him perform an airborne homing attack that immediately changes his trajectory to send him spinning directly into a nearby enemy, spring, switch, or other important object. However, you can't just use it to effortlessly defeat every Eggman machine standing between you and the end of each stage. Many of these foes have retracting spikes, which forces you to use careful timing. But it's still a powerful and satisfying inclusion in Sonic's arsenal that is often put to good use, as in sections where homing into one enemy, then the next, and then another is the only way to cross wide chasms.

The levels in Sonic 4 are spread out across four main zones, each with three normal stages and a boss stage. (There's also a fifth zone where the final boss battle takes place.) These zones employ motifs that reference the levels from the first Sonic the Hedgehog: There's a cheery zone set among green hills and lovely waterfalls; a zone set against a backdrop of neon-lit casinos; a zone set in an ancient temple, much of it underwater; and a zone set among spinning gears and cold machinery. Some levels delight with their speed and kinetic energy, keeping Sonic spinning through loops and bouncing off of springs like a pinball as he speeds his way to the goal. Other levels frustrate at every turn, encouraging you to take it slowly lest you go flying into some deadly obstacle you had no way of knowing was there. There are even a few scattered sections where just figuring out where you're supposed to be going or how to proceed past some obstacle can be a bit tricky, which saps the momentum in a game that places an emphasis on speed. Most stages fall somewhere in between, offering a confusing mix of speedy satisfaction and hindrances that bring the action to a standstill.

Sonic 4 is not an easy game. There are sections that require you to move with precision through passages while massive walls nip at your heels, ready to crush you if you make one false move. These areas can rapidly siphon your lives away. Balancing this out is one easy level, called the Road of Cards, which heaps extra lives on you by the dozens. This level, in which you spin playing cards around as you speed past them and gain extra lives whenever three of them at a time come up with Sonic's face, is a joy the first time you play it, racing along and trying to turn over as many cards as possible in a short amount of time to improve your odds of racking up lives. But because this stage is by far the easiest way to earn extra lives in the game you'll probably find yourself coming back to the Road of Cards numerous times. Eventually, it starts to feel like a chore, and you'll wish there were a greater variety of ways to stock up on extra Sonics.

Each zone culminates in a boss battle against Dr. Eggman, using one of his mechanical contraptions to finish Sonic off. These boss battles are all reminiscent of those from the first Sonic the Hedgehog, and they're mostly simple, easy, and forgettable. Just bop Eggman's not-so-fabulous flying machine a few times, and it's over. But the final boss battle goes too far in the other direction. It's a protracted battle against Eggman, and it pulls off the remarkable feat of being simultaneously challenging and dull. The fight is a piece of cake at first, but it gets tough after a few minutes and each time you die, you have to repeat the boring, easy part of the battle again. When you defeat him, you won't be so much elated at your victory as just relieved that it's over.

To truly be victorious, Sonic must not only complete each level and defeat Eggman, but he must also collect the seven chaos emeralds. These are kept in special stages where Sonic is perpetually spinning against a background of kaleidoscopic psychedelia, and rather than control Sonic directly, you rotate the stage around him to guide him to the emerald buried within while trying to avoid certain bumpers that immediately kick you out of the level. To gain access to the special stages where these are hidden, you must reach the end of a stage with at least 50 rings, which is no easy feat on most stages because a single hit from an enemy sends all your rings flying. Whether you had 50 rings or 250 to your name, a single error when nearing the end of a stage spoils your shot at the emerald, and if you gain access to the special stage where the emerald is kept but fail to complete it, you must begin your pursuit for the emerald anew. This structure is true to the original Sonic games, but by today's standards, it feels needlessly ruthless.

Sonic 4 looks exactly like you'd want a contemporary follow-up to the old Sonic games to look. Sonic himself and the immediately recognizable environments are faithfully re-created in crisp high definition, with a color palette that nails the vibrant and inviting look of the original games. The sound follows suit; the little clang that accompanies Sonic's act of picking up rings, the cute little noise Sonic makes when grabbing an air bubble underwater, and all the other sounds are a great throwback to Sonic's early days. Unfortunately, none of the music is quite as catchy as some of the great themes from those games, and the short, obnoxious loop that plays during the final boss battle makes an already unpleasant moment worse.

There are enough good moments in Sonic 4 to demonstrate that an update of the classic Sonic games has the potential to be great. But this is not that great game. Sonic fans hoping for a worthy tribute to the early days of the blue blur will have to keep waiting, and those who aren't familiar with Sonic's earliest adventures won't find out what the fuss is about by experiencing this one. With more episodes of Sonic 4 on the way, we may not have to wait too long. Some may be able to overlook the frustrations of Sonic 4 and have an enjoyable experience, but Sonic deserves better, and so do we. 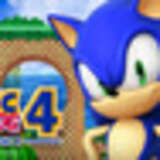 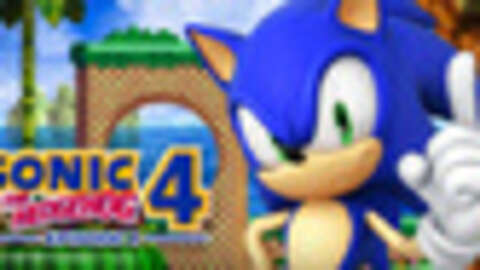 Sonic is back for his fourth installment in the classic 2D series, revamped from the ground up.