The combination of the unbearable load times, the smattering of minigames, and the poor minigame design make Sonic Shuffle a boring diversion at best.

The idea of a video game emulating the mechanics of a board game is nothing new; there have been digital renditions of board games on most every console made. However, with the recent success of Mario Party, game companies are tapping the "party game" genre with a renewed fervor, this time adding popular video game mascots to the mix. Unfortunately, not all of these games are able to reach the same level of revelry as the new party game archetype, Mario Party. Sonic Shuffle, Sega's entry into the genre, is not only a poorly realized party game, it's also a boring one to boot.

Sonic Shuffle takes characters from the Sonic universe - starting off with Sonic, Tails, Knuckles, and Amy -- and puts them into what's essentially a 3D board game. Characters move around the board via a set of randomly assigned cards; the number on each card dictates how many spaces your character can move in one turn. The spaces themselves trigger different events, such as giving or taking away rings, which can be used to buy power-up gems, move to other spaces on the board, go into a card battle, and go into a minigame.

In Mario Party, Sonic Shuffle's primary competitor, the minigames make up the bulk of the game time, and the board game is simply a means to access them expediently. Such is not the case in Sonic Shuffle. The spaces that trigger the minigames are sparsely scattered across the board, and it is by no means necessary to play the minigames in order to complete the game. In fact, it's entirely possible to go through a game of Sonic Shuffle without playing a single minigame. The minigames, once you actually get to one, have the tendency to be confusing and pointlessly complex. The joy of minigames comes from their ease of play - anyone can pick them up, and from there it's simply a four-way test of skill. In Sonic Shuffle, more often than not, the minigames are a test of who can decipher the needlessly bewildering gameplay first. For example, one of the minigames puts you on a beach, with a big, evil, Robotnik-shaped sun overhead. There is an umbrella in the middle of the sand, and all four players are jockeying for control of the umbrella. After a set amount of time, the big, evil, angry sun blows heat waves at the beach, knocking a handful of rings out of everyone who doesn't have an umbrella - unless, of course, you're standing under the stationary shade in the lower left-hand corner of the screen. Whoever has control of the umbrella when the heat blast comes can then run around and collect any rings on the beach until everyone gathers their wits and comes back out, ready to steal the umbrella again. It doesn't sound fun, and it is in fact even less fun in practice. There are a handful of more simplistic minigames in the mix, the best of which are reminiscent of classic games such as Combat. These can be a fair amount of fun, but even then the action is watered-down by the game's horrendous load times. To put it bluntly, the combination of the unbearable load times, the smattering of minigames, and the poor minigame design make Sonic Shuffle a boring diversion at best.

To its credit, Sonic Shuffle is a visual treat. All of the game's characters are modeled using the now-popular cel-shading effect, which gives them a distinctly cartoony look that complements the Sonic characters nicely. Several of the levels are suggestive of previous Sonic titles, such as the iceberg level and the grassy knoll. There are also some entirely new level designs, the most impressive of which is the cosmos level. While its design isn't terribly conducive to gameplay, the use of constellations as backgrounds and the deep space feel of the level is truly breathtaking. The game's sound effects are standard Sonic fare, as is the soundtrack, but they work in union with the cartoony graphical production nicely, giving the game an overall lightweight feel.

Party games are, as the name states, supposed to be a good time that can had by a group of people. Sonic Shuffle pegs the graphical representation with a fair amount of gusto, but it falls flat on its face in its attempts to stir up a party of any kind. Those looking for a Mario Party equivalent will be brutally disappointed with Sonic Shuffle, and they are better-off looking for another outlet for their four-player gaming desires. 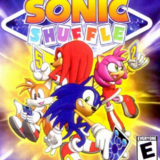 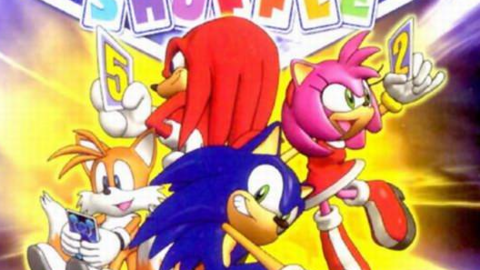 The combination of the unbearable load times, the smattering of minigames, and the poor minigame design make Sonic Shuffle a boring diversion at best.