Sega and Sonic Team would like to remind you that Sonic the Hedgehog can still be a whole lot of high-speed fun.

2005's Sonic Rush for the DS was a 2D side-scroller that picked up where the already excellent Sonic Advance series left off, injecting a little polygonal flair into the graphics and the gameplay, making smart use of the DS hardware, and generally serving as a bracing reminder of what made Sonic the Hedgehog so great in the first place. At its core, Sonic Rush Adventure offers a very similar experience, filled with an incredible sense of speed, serpentine levels, a variety of gadgets, contraptions, geegaws, and whirligigs for you to fling yourself off of, and rings, rings, rings. What Adventure adds is more structure outside the action, as well as some brief moments of simple 3D action. Some of these additions arguably don't add a lot to what made Sonic Rush so great, but they don't take away from it, either.

Sonic Rush Adventure kicks off with Sonic and Tales being sucked through some kind of dimensional portal and ending up on a small island inhabited by a young raccoon named Marine. It would seem that Marine is the type of character that's supposed to be the comic relief. In practice, she ends up grating on the nerves with her coy obliviousness, making you want to skip right past the game's dialogue sequences. Luckily, you won't miss much if you do. As Sonic, Tails, and the increasingly intolerable Marine try to figure out a way to get Sonic and Tails back to their dimension, you eventually hook up with Blaze the Cat, the other playable character from the original Sonic Rush, and go after one Captain Whisker, a mildly inept robot pirate in possession of an ancient artifact that Blaze is trying to recover.

Your quest will take you to a series of nearby islands. You'll see thick jungles full of giant, springy mushrooms, a brassy, steam-powered island dense with pipes and clockwork, an underwater cavern encrusted with glowing gems, and more. These are some great-looking backgrounds that are rich with detail, and if running through the levels at incredible speeds weren't so much fun, you'd probably want to stop and drink in the atmosphere. There's also some terrific background music that, like the original Sonic Rush, has a sample-heavy, hip-hop-inspired sound, though this time with a little bit of island flavor. The 2D rollercoaster ride offered by much of the game is broken up by the occasional 3D flourishes. Though the action plays from a side-scrolling perspective, the characters and other key elements are actually polygonal, making their transitions into 3D action surprisingly smooth. The levels are consistently really exciting, with alternate routes to explore and plenty of great set pieces. They're the kinds of levels that you'll want to play through more than once--something that the developer banked on.

Though you'll initially play through the first few levels as just Sonic, you'll eventually be able to choose between him and Blaze. They handle almost identically, though you'll occasionally stumble onto routes that Blaze's fiery disposition enables her to take. In addition to the run, jump, and spin abilities that are Sonic standards, you can perform a few different dash maneuvers, allowing you to plow through enemies and make your way to areas that an unassisted jump won't reach. These dashes drain a meter that you can refill by doing tricks, which you can do simply by hammering on the B button whenever you've been launched into the air, or when you find yourself grinding a lengthy piece of rail. The trick here is that the B button also serves as the jump button, so knowing when to ease up on the tricks is key to maintaining your momentum and not plummeting to your death. The whole dash and trick mechanics were a big part of what made the gameplay in Sonic Rush feel fresh, and they continue to work well here.

There are seven major islands in Sonic Rush Adventure, each of which has two stages, which can take from about one to four minutes to blast through, followed by a boss fight, about which the most remarkable thing you can say is that they bring a lot of polygonal spectacle to the 2D gameplay. While 14 quick levels and seven boss fights might not sound like much, there's more to Sonic Rush Adventure than that. In order to even get off the island that Sonic and Tails first crashed on, you'll have to build yourself some seafaring transportation. Tails can help you out with this, though he'll need you to collect the construction material. You earn material every time you finish a level, though how much you'll earn will depend on how fast you were, how many tricks you did, and how many rings you collected. Regardless of how well you do on a level your first time through, you're all but guaranteed to revisit it, as you need not only a number of materials to build your transportation, but different types, which can be found only on specific islands. Playing through the same levels repeatedly could have been a drag, but they're so consistently well made that it takes a number of plays before a level starts to get wearying.

The first vehicle you'll build is essentially a Jet Ski. Before you can go anywhere, you'll have to actually draw your course using the stylus. With your course plotted, you'll take control of the Jet Ski, which you can move horizontally with the stylus and is seen from a behind-the-back perspective. Though your course is fixed, there are still obstacles and enemies that you have to dodge and rings to collect. You can tap on the screen to boost, and there are ramps that you have to perform tricks off of by making a specific gesture with the stylus. Eventually you'll find that the aqua blast doesn't have enough range, at which point you'll have to build your next vessel. There are four different vehicles in total, each with its own control schemes and its own unique abilities that make it best suited for specific routes. The hovercraft is most similar to the Jet Ski, though with a heavier focus on offensive abilities. In the case of the barge and the submarine, you don't actually control the ship at all, instead worrying exclusively about firing weapons at incoming enemies. These traveling sequences are decent little interludes between the regular levels, though they're never any better than the initial Jet Ski.

It'll probably take you between four and six hours to defeat Captain Whisker, but you'll have to put in a whole lot more time if you want to see the game's true ending, which requires you to collect Sol and Chaos emeralds. You'll get Sol emeralds by taking on a series of missions that once again pits you against the game's bosses, while you'll have to search the seven seas for a rival speedster named Johnny in order to recover the Chaos emeralds. There are also a huge number of side missions you can take on at any time during the game, the majority of which challenge you to perform specific tasks on levels you've previously visited. Additionally, there are a number of multiplayer options, including local game sharing and online play. The multiplayer has players competing to finish a level faster or collect more rings, and the online play is bolstered by a competitive leaderboard.

The extra bells and whistles that Sonic Rush Adventure add to the formula might not equate to much of an overall improvement, and the game might not have as much impact as its predecessor, but this is still a mighty-fine platformer that is guaranteed to satisfy Sonic fans. 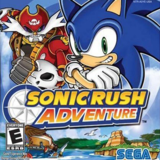