No. In Sonic Riders: Zero Gravity, it still doesn't make sense that Sonic the Hedgehog would need to race upon a hoverboard. That's like Cyclops from the X-Men buying a laser gun, or Iceman needing a snow cone. And even though there are a couple of speedy thrills, with a two-hour campaign, an overbearing plot, and lame course design, you need this hoverboard racer about as much as Wolverine needs a new set of Ginsu knives.

The story is obviously ludicrous. After all, at their core, Sonic games have always been about the battle between a talking hedgehog in sneakers and a fat, mad scientist. But Zero Gravity is ludicrous in unexpected ways. The game begins with a rampage (ripped straight out of I, Robot) in which Sonic and company are caught in the middle when an ancient artifact they stumble upon turns out to be a prized possession of the robots' mother. The team investigates and quickly crosses paths with Dr. Robotnik, who swears he has nothing to do with the calamity, to which Sonic says "Well I guess for now we'll have to buy that Eggman isn't involved."

Yes, it's that head-slappingly stupid. Even worse, when you finally discover that Eggman is involved, it's revealed that the reason he's trying to gather the artifacts and stop the robots from rampaging is so that he can...cause the robots to rampage. But wait, it gets worse. The artifacts are part of this crazy legend involving the Babylon Rogues (a rival hoverboarding team comprised of, what else, birds), and they eventually lead you to a place referred to as "The Crimson Tower," which is, of course, blue.

Not only are the plot and dialog bad even by Sonic standards, but you also have to sit through huge chunks of this garbage every time you complete a race. Ironically, the story mode itself is very short and takes only about two hours to beat. You simply jam through a handful of courses, bang your head against whatever hard object is nearby during the cutscenes, and then, suddenly, the credits roll. After that, your only option is to race through the same levels in survival mode, time attack or world grand prix mode, which earns you credits to purchase "extreme gear."

The racing itself is all over the place. The basic controls have you pressing forward on the L-stick for thrust, and moving it side to side to turn. If you need to make a really sharp turn, you can hold a button that slows you down but lets you rotate freely. Once you're pointing in the direction you want to go, you release the button and burst off, as if you were fired from a slingshot. This is an interesting mechanic that is put to creative use only in one level, where you must make hairpin turns over a cliff. The only way to pull one off has you actually hanging in space when you go off the turn, after which you dash back onto the road. It's thrilling when it works, but it works only half the time. You're just as likely to shoot yourself down into the abyss, or up into the ceiling, which is somehow also deadly.

Furthermore, slingshot turns are complicated in that they use energy points. These are accumulated when you make jumps. Jumping is simply a matter of hitting a button as you go off of a ramp. The later you hit the button, the more energy points you get. These can be spent on either turns or dashes. If you dash, you move much faster, and actually gain additional speed by running into objects (you didn't misread that). However, if you use all your energy on a dash, you'll eventually come to a tight corner, attempt to jump turn, and be stopped dead in your tracks because you were out of juice. Lots of games penalize you for overusing boost, but none this obtusely.

Speaking of obtuse, brace yourself for this next bit about hoverboard power-ups and shortcuts. You see, every board has its own selection of abilities that can be activated in each race if you collect enough rings, which are scattered throughout every course. These powers don't carry over from race to race.

But rather than catalog them all, we'll focus on three: grind, wheel, and air. Each of these powers correlates to a type of shortcut. If you can grind, the rails are open to you. All you have to do is jump on one and you're on your way. With wheel, you can crash through obstacle-laden detours. However, the wheel is generally terrible, and its shortcuts are the worst. And if you have the air, you can fly off of a ramp, through three rings, and past your competition. Although the concept of three different types of shortcuts is interesting, none of them are much fun in practice, and they sometimes take longer than the normal route.

The graphics are mostly fine, and in a couple of spots, the game manages to convey a real sense of speed. The sounds aren't bad either. Some of the music is catchy, and it's nice that the characters talk smack every time you pass a rival.

Nevertheless, the game's overall lack of content makes it one of the last things you'd want to spend 40 bucks on. Even though it manages to capture the occasional burst of Sonic speed, there isn't enough content in Sonic Riders: Zero Gravity to keep you entertained for more than two or three laps. 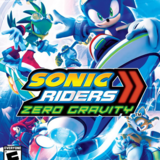 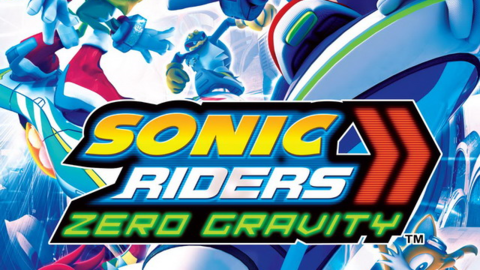 Race around at high speeds with Sonic & Co.