Within the first hour of playing I had finished the game.

Sonic R for the Saturn features all of the lovable characters from Sega's previous Sonic games in a 3D racing game. Tails, Knuckles, Amy, Sonic, and the rest of the Sonic team are all ready to burn rubber...shoe rubber that is.

The usual cartoon look and feel of previous Sonic games comes across well in the 3D polygonal world of Sonic R. Although there are some clipping and pop-up problems, the overall graphics are pretty good. It's mostly the sense of speed that you feel as the track goes zipping by while you're running that makes the game look really cool.

As far as the sound and music are concerned, I thought they were great. I think that a lot more games should have songs with vocals. It gives the game so much more personality. And with all of the familiar Sonic sound effects, Sonic R has more in the personality department than in the depth department. And that's my biggest problem with Sonic R.

Within the first hour of playing I had finished the game. And although I had only done it with one of the four selectable characters I still had finished in first place on all five of the tracks. There is a hard mode for more of a challenge, but in the end there simply should be more tracks. Sega tried to give Sonic R replay value by putting hidden characters in the game. You're rewarded with Dr. Robotnik when you finish first in every race. The other four hidden characters are quite a bit more difficult to unlock. You have to pick up the five hidden coins on a track and place in the top three. This will allow you to face the hidden character for that course in a challenge mode. If you beat him you get him as a playable character. The hidden characters are mostly robot versions of the already playable ones. And as was the case in the previous Sonic games, if you collect all of the Chaos Emeralds you get Super Sonic. But quite honestly, even after I finished in first place on a course, I had almost no desire to ever race on it again.

Besides the Grand Prix mode there is a time attack mode that lets you try to beat your best course time and a two-player mode, which lacks any fun whatsoever.

In the end it seems Sonic R is a neat racing game, but be warned it is a racing game and not a real Sonic game. There are no battles with Dr. Robotnik or any of his little minions. All you do is run. Sonic R is a good rental, but it is so short that you'll probably finish it the day you rent it. 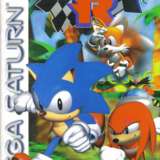