I vividly remember finally nabbing that final star in Mario Galaxy 2. It had taken weeks of planning the perfect route, and timing each and every button press to guide Mario across that agonising collection of spinning platforms and deathly gravity traps. In a way, it was an oddly torturous experience, but--for that feeling of elation upon reaching the glorious golden star--an entirely worthy one. Sonic Lost World so desperately wants to capture that feeling. The trouble is, where Galaxy presented its more difficult challenges only to those who actively chose to pursue them, Lost World bombards you with arduous platforming trials at every turn.

The first level, for example, is a take on the classic Green Hill zones of past Sonic games. Long grass-covered cylinders and floating planetoids are home to complex spring arrangements and rolling spiked balls that leave just the tiniest of gaps for you to squeeze through. Then there are the enemies--some heavily armoured, others camouflaged onto walls--that lie directly in the path of speed boosters and at the end of long spring-aided jumps. It's all the inordinately tricky platforming of Galaxy without any of the gentle trials needed to ease you into it.

That's odd considering this is a game that shamelessly lifts ideas from its plumber-fronted rival. Each of its levels are filled with the same free-floating islands and gravity-based trickery that made Galaxy such a success, and even includes those super tricky tunnels and half-pipes that slide you along at a pace while you nudge into rings and avoid deadly spikes. Frozen Factory throws slippery surfaces into the mix, with one wrong move hurtling Sonic off into space, while Tropical Coast throws you into a lush tropical environment filled with some familiar-looking planetoids. Even the boss battles are similar, with one fireball-dodging session an almost like-for-like replica of Mario's Bowser battle atop a small planet.

This is a game that shamelessly lifts ideas from its plumber-fronted rival.

Lost World's copying isn't necessarily a bad thing. After all, if you're going to take ideas from anywhere, it might as well be from Galaxy. Sometimes this approach works. You might have to use gravity to guide a giant apple into a mincer on a small planetoid, carefully avoiding enemy fire before leaping into the stream of juice to catapult to another area. Or, you might have to deftly guide a Sonic snowball around a series of intricate platforms, much like the levels in Galaxy where you manoeuvre Mario atop a giant ball.

Unfortunately, a lot of the time Lost World lacks its rival's finesse. Sonic's raw speed sits uncomfortably alongside the gravity-based platforming, making it far too easy to suddenly leap off into oblivion. And while you can at least slow Sonic down to a more sedate pace, his overly twitchy movement makes it tricky to land on certain platforms, or perform the precise movements needed to nab one of the many red coins hidden amongst a level. Plus, a loose sense of depth means it's difficult to jump precisely onto switches to free trapped critters, and line up jumps, making the already difficult levels more taxing.

Lost World's own ideas often fall flat too. Rings placed alluringly up the sides of walls can be reached with a spot of parkour, but its implementation is clumsy. All too often I found myself cursing at the screen as Sonic failed to leap smoothly from a platform to a wall-run and frustratingly plunged to his death in endless space. The wisp powers of Sonic Colors, such as drill, which lets you burrow through the ground to collect extra rings, and rocket, which lets you jet off to distant planetoids by aiming with the motion sensor, make a return, but they're more of an amusing aside than an integral part of Sonic's arsenal.

Then there are the new powers, such as eagle, which uses the motion sensor to fly Sonic through the air, but does so erratically, with an imprecision that makes collecting the bonus rings it puts tantalizingly within reach a nightmare. Each power is time limited too, and in the case of eagle, if you drift off course because of the frustrating motion controls, you're dropped off the planet to your death. Again.

Lost World fares better in its 2D sections, where some of the classic Sonic platforming magic makes an appearance. Zipping Sonic through loop-the-loops and smashing badniks to free the cutesy animals trapped within is great fun, with the depth and control niggles far less of an issue here. And while the challenges aren't all that imaginative--avoiding falling blocks and navigating banks of bouncy springs--they're way more enjoyable than the frustrating mishmash of speed and exploration found in the 3D sections. Unfortunately, here too a misjudged level of difficulty stifles progress; I defy anyone not to develop an unhealthy hatred of the all-seeing owl that unleashes an insta-death flurry of bats when you wander into its evil, gazing spotlights.

The fact that these moments are thrown into the main story arc is baffling and immensely frustrating too. At least you're not missing much when it comes to the story, which plays out like a Saturday-morning kids' show, complete with grating 90210 voice acting and a gross overuse of the word "bro." Plus, while it's not going to win any awards for its art style, Lost World's colourful visuals are easy on the eye, and even raise a smile or two during its more esoteric moments, with the candy-based platforms of Desert Ruin being a particular highlight.

Sonic Lost World desperately wants to be Mario Galaxy, but in overtly coveting the great Italian plumber, it smothers the talents of its blazing blue hedgehog.

If you opt for the 3DS version of Lost World don't expect a dramatically different, or better experience: both the story and zones are the same. There are some redesigned levels to accommodate the 3DS version's simplified powers (reminiscent of the shield-based power-ups from Sonic 3), but the same design, control, and difficulty issues remain.

That some inoffensive visuals and a few fun 2D sections are the highlights of a largely 3D game is telling. Sonic Lost World desperately wants to be Mario Galaxy, but in overtly coveting the great Italian plumber, it smothers the talents of its blazing blue hedgehog. There were moments when I thought it might all come together, when Sonic's fun, if slightly erratic, speed would be matched to levels that were intelligently designed to make the most of it. There were some brief glimpses of that, but for the most part, Sonic Lost World is confused and derivative, and tries far too hard to be clever without any clever design to back it up.

View Comments (563)
Back To Top
5
Mediocre
About GameSpot Reviews 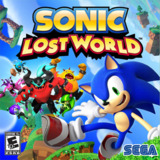 Mark spent much of his youth chasing down Chaos Emeralds, just so he could turn a blue hedgehog yellow. He also considers Sonic & Knuckles' lock-on cartridge gaming's greatest technological achievement.