When Sonic the Hedgehog debuted in 1991 for the 16-bit Sega Genesis, it was a revolutionary alternative to the somewhat-stale Super Mario World for the then-new SNES. It's strangely ironic that in 1997, the Sonic franchise is Sega's flagship series for its 32-bit Saturn that in no way competes with Nintendo's revolutionary Super Mario 64 for the N64. A true 32-bit Sonic title has yet to be released - last year's Sonic 3-D Blast was a port of a 16-bit title, and the latest Sonic game, Sonic Jam, is a retrospective of the Sonic 16-bit cartridges with a 3D "Sonic Museum" tagged on that offers little in the way of interest. A racing game, Sonic R, will be out later this year, but will it be enough to save the series?

If you sat out the last ten years of video gaming, here is the basic premise of Sonic the Hedgehog. You are a blue Hedgehog, called Sonic (hence the title), who can run very fast. Your enemy is the evil Dr. Robotnik, who is always out to get you and to capture your peace-loving friends. By collecting rings (to maintain your health) and chaos emeralds (to advance in the game), you move through levels at a breakneck pace on a mission to bring down Dr. Robotnik. Most levels take place in a side-scrolling fashion, but each installment in the series adds a new sort of bonus level (from a pinball-like contraption to a 3D roller-coaster ride).

The game's new feature, the Sonic Museum, is a 3D world that isn't very impressive. The graphics are on par with other Saturn games, but the 3D world looks nowhere near as smooth as Super Mario 64 or even Crash Bandicoot. The museum segments let you look at some interesting character artwork and listen to each installment's soundtrack, but the real bonus is the game's video library that includes a variety of Japanese Sonic commercials and cartoons. The history presented here is hardly behind-the-scenes, and it might actually help if more gameplay to the exploration part of the game existed (the game lets you collect rings only for a set amount of time).

Sonic Jam is a historical document of how a great idea went from being "fresh" and "groundbreaking" to "mediocre" and "tired." With the original Sonic the Hedgehog, everything was incredibly new and interesting at the time. Surprisingly, the majority of the game still holds up against today's hits in almost every area (including graphics). With Sonic 2, which brought about the introduction of Sonic's fox sidekick Tails, the concept started to wear thin, and the levels started to look roughly the same. Give Sonic the Hedgehog 3 a play, and you'll realize that while the game's graphics showed significant polish, the quality (as well as Sega's proverbial ship) was sinking at the time of the game's release. By the time you make it to Sonic and Knuckles, which introduced Knuckles, Bizarro to Sonic's Superman, as a playable character, you almost wonder why Sega bothered with a fourth title. (The title also featured "lock-on technology" that, aside from letting you play as Knuckles in earlier titles, was worthless.) This short journey from brilliance to mediocrity is presented here in Sonic Jam.

If you're dying to experience the 16-bit magic of the first Sonic the Hedgehog again, this title is as good as any way to do that and get a couple other neat Sonic titles in the process. Sega could have made a far more complete Sonic collection though by including Sonic CD, Sonic Spinball, and the many other derivative titles that have been released over the years. It's only been six years since the first Sonic title was released, and perhaps most of us aren't quite nostalgic about it yet - that combined with the title's lack of history, behind-the-scenes information, and American commercials, make it a less-than-definitive Sonic retrospective. 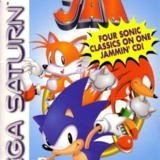 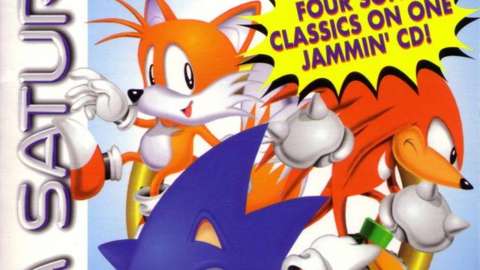