Imagine a game in which the mundane actions you perform in real life are replicated to an exaggerated degree in the digital realm. A modest hop in your living room results in your in-game character soaring into the virtual stratosphere, and a slight flick of your wrist allows you to fling a missile right into the back of a speeding opponent. It's an intriguing idea, but Sonic Free Riders fails to capitalize on the promise of its intuitive control scheme. At its best, Sonic's Kinect-powered racing game translates your real-life gestures into digital actions, and it's exhilarating to fly around the track at top speeds, landing ridiculous leaps while fending off the pesky foes on your tail. But this thrilling sequence rarely crops up because the controls are so maddeningly inconsistent. You're just as likely to slam into a wall as you are to steer gracefully into a sharp turn, and your inability to consistently control your actions results in bouts of frustration and anger. If you have lots of patience and a forgiving nature, there is some fun to be had in Sonic Free Riders, but it's not worth the commitment needed to unearth those nuggets of entertainment.

Grand Prix is the main draw here, but this assortment of objective-based challenges (including collecting rings, landing jumps, and winning traditional races) isn't what separates Sonic Free Riders from other racing games. It's all about the Kinect. Sadly, the novelty of using a motion-tracking camera cannot compensate for the many problems dragging this game down. Steering is the most fundamental control element you need in a racing game, but this basic aspect is woefully inconsistent in Sonic Free Riders. You stand sideways in front of the television like you're riding a skateboard. By tilting your body forward or backward, you're supposed to be able to lean into turns, but reality quickly turns this simple concept into a nightmare. Sonic Free Riders has difficulty recognizing degrees of movement, so it's nearly impossible to avoid obstacles in the road without slamming directly into a nearby wall. Smart course design does its best to hide your inability to make tight turns by placing speed boosts and ramps at many corners, but this is a weak solution. It's all too obvious that control is being taken away from you so you don't ram into another wall, and this hands-off approach isn't nearly as rewarding as making a tough turn using your own skill.

The control issues extend much further than lateral movements. Every element of this gesture-based system is fraught with issues, which means you're rarely able to get into a groove. The biggest problem is that there's a delay between your real-life movements and the in-game representations. For instance, you have to jump well in advance to initiate a soaring leap on time or punch a good distance before the rock blocking your way to have any chance of destroying it. Because of this, it's possible to come to grips with the controls once you memorize the course layouts. After you know well in advance that you have to duck to get under a low barrier, you can make sure you crouch a second or two beforehand so you safely make it past. This means that Sonic Free Riders does become more exciting once you spend a few hours learning the weaknesses of the control scheme and the intricacies of the tracks, but that's no excuse for lousy controls. Furthermore, because that delay always exists, you're never able to overcome obstacles that require sharp reflexes. This is especially noticeable when you have to avoid weapons. Your character takes far too long to move laterally, so you can only brace yourself for impact when an ink blot is in your path, because there's no way you can swerve around it.

It's a shame the controls in Sonic Riders are so awful, because there's actually a fun game buried under this punishing shell. Track design is a strong point. There are shortcuts and alternate paths sprinkled throughout every course, and figuring out how to reach these seemingly inaccessible areas gives you a valid reason to replay every track. Granted, the controls do their best to keep you from accessing these secrets, and it's infuriating when you narrowly miss a hidden grind rail through no fault of your own, but the elaborate course designs are at least home to many surprises. On some courses, your hoverboard changes in the middle of the race, and though these alternate racing methods come with their own control issues, they do inject some variety into the racing. The most interesting aspect is how some of them require completely different gestures from the standard hoverboard. Swimming, for instance, requires you to face the screen and swing your arms in exaggerated circles, which is a nice break from the lean-and-jump action of the hoverboard.

Nifty shortcuts give you a good reason to replay tracks, but there are tangible benefits as well. By collecting rings while you race, you accrue a sizable bank to splurge on goods in the store. Specialized boards allow you to achieve a higher top speed or take tighter turns (though they still suffer from the aforementioned control issues), but the most interesting aspect is gear you can purchase that gives you new abilities. This is where good knowledge of track design is important. The parts you purchase in stores allow you to do things such as grind rails or glide through suspended rings, but you can equip only a limited number. You have to know what sorts of shortcuts are available on every track before you set out, and weighing the benefits of each perk gives a layer of strategy to the high-flying racing.

Unfortunately, all of the good elements in Sonic Free Riders are overshadowed by the aggravating controls. They're simply not responsive enough for the fast action, which makes this game consistently aggravating even after sinking hours into learning how everything works. Not even the multiplayer (neither online nor offline) can save this frustrating racer since the controls put up a bigger challenge than your opponents. It's doubly disappointing considering how good the other aspects are. The courses are well designed, with many shortcuts awaiting the adventurous racer, and upgradable equipment injects some strategy into the experience. It's just difficult to enjoy any of these good moments when you're constantly fighting the awful controls. 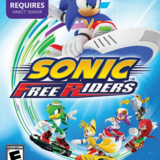 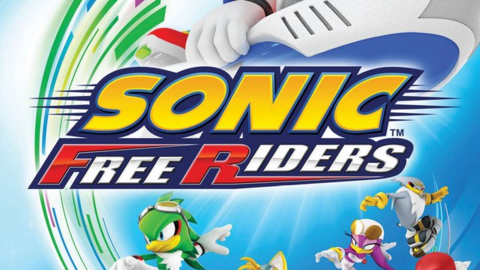