After the faithful but inconsistent first episode of Sonic the Hedgehog 4, Sonic Colours is a welcome surprise: a fresh-faced 3D Sonic with great looks and breezy action. A handful of flashy new abilities are tossed into the mix, but they don't undermine the essential Sonic formula of bot bopping, ring grabbing, and high-speed platforming. It's not without occasional niggles, but Sonic Colours exhilarates much more often than it frustrates, making it a commendable new entry in a sometimes shaky franchise.

The game takes place in a giant orbital theme park supposedly built by Dr. Robotnik (Dr. Eggman, if you insist) as an interstellar apology for all of his evil deeds. Of course, it turns out that the park is really an instrument for further evil deeds, with Eggman imprisoning its unsuspecting alien visitors, called wisps. And, of course, Sonic and Tails are there to thwart him. The premise of Sonic blasting through the park, liberating wisps as he goes, is all that's needed, but some self-aware winks to the audience nudge the story from perfunctory to likeable. After bragging about how he can't be stopped, Eggman insists, "I know I say that every time, but, really, this time nothing will stop me." ("Who are you calling nothing?" sasses Sonic, ably voiced by Roger Craig "Chris Redfield" Smith.)

The scene is set with six themed worlds, among them the mouth-watering Sweet Mountain, with donut loop-the-loops, and Aquarium Park, a mash-up of an oceanarium and Japanese garden that is patrolled by samurai robots. The levels pop with creativity and colour; their artful designs--beautifully executed--rank the visuals among the best on the Wii. A few aesthetic cues are lifted from Super Mario Galaxy--in the space-themed Asteroid Coaster zone, you even run briefly over the spherical surface of a planetoid between speed-boost strips. In close-up view, Sonic's animations are suitably lively, but you only get a good look at him in cutscenes and while limbering up at the start of levels; much of the time, the camera pulls far back to show you more of the path ahead.

The action segues from platforming in both 3D and side-scrolling pseudo 2D to rail grinding and racing along with the camera at Sonic's back, with the odd bit of skydiving to boot. There's plenty of variety within and between levels, even without the novelty of wisps. These wisps are the colours for which the game is named; when you set them free, wisps confer on Sonic a special ability according to their colours. These abilities include a blimplike flying form, a sharklike berserker form, a rocket form that blasts you high above the level, and a wall-walking pink spike-ball form. As novelties, the wisp powers are amusing enough but still not as much fun as Sonic's essential repertoire of speed boost, double jump, and ground stomp. The levels are engineered to encourage their use, and bonus points are awarded for doing so, but the temptation is to rely on the basic platforming where they aren't required.

Although the Classic Controller is an option, the controls for a remote and nunchuk feel best, with the nunchuk's analog stick used for movement and the remote used for jumping and making speed boosts. Motion control is limited to shaking the remote to activate wisp powers. The scheme makes for movement control that is fluid and intuitive, though imperfect; it's a little too easy for momentum to carry you off the edge of a narrow platform, for instance, and some of the less common platforming devices are on the finicky side. The former, combined with the liberal use of instant death drops in most levels, can make for some frustrating holdups, particularly where a checkpoint hasn't been sensibly deployed nearby. At its best, though, Sonic Colours has you sprinting, spinning, and dodging death as blissfully fast as a Sonic game should, with boost strips, bounce pads, and the retractable grapplelike homing attack flinging you around the level at high speed.

The inclusion of familiar, classic Sonic sound effects is welcome, and the music provides jazzy, high-energy backing to complement the speed and sparkle of the themed zones. The variety and creativity of those zones are only really let down by the sameness of the boss fights at the end of each. Two-person cooperative play is included as an extra zone, Game Land, presented as an arcade cabinet titled Eggman's Sonic Simulator. It's a bonus addition rather than a key feature and never as much fun as the game proper. By comparison, the levels are plain ugly, and the co-op system is merely passable. It's too easy to bounce off of each other's heads, producing a stun effect, and there's no checkpoint respawn--once one player has expended his or her few lives, the other is left to soldier on alone. If the gulf between player-skill levels is vast, there's at least an assist mode, temporarily transforming one of the pair into a hovering ball at the other's side, perhaps to let the latter navigate a tricky section.

You might finish all the levels (there are seven for each of the six main zones) in about 10 hours, but you're encouraged to improve your score and rank in each by collecting more rings, stars, and wisps, as well as improving your time and seeking out the alternative routes through the mostly linear levels. Even without the incentive of an improved score on the online leaderboards, though, it's worth revisiting zones in Sonic Colours just to admire the dazzling scenery at top speed. This is a Sonic game with verve and imagination, and Wii owners shouldn't miss an opportunity to play with Sonic at his best. 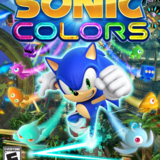 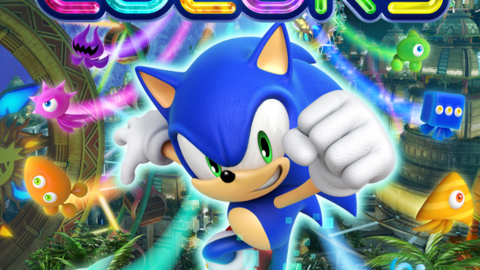 Sonic the Hedgehog races through incredible theme-park-inspired worlds to rescue a colorful alien race from the clutches of Dr Eggman.