Sonic and the Secret Rings Review

Sonic and the Secret Rings delivers an excellent sense of speed and plenty of depth, and what's just as impressive is that it makes Sonic fun again.

After a slew of disappointing and downright bad games, Sega's speedy hedgehog has finally returned in a game worthy of the Sonic legacy. Sonic and the Secret Rings for the Wii takes the game back to its high speed roots. While you can technically move in three dimensions, you're almost always moving forward whether you want to or not, and lateral movement is limited to taking one or two steps in either direction as you involuntarily sprint down a narrow path. Confined as it may be, Sonic and the Secret Rings works because it lets you run at breakneck speeds through great-looking, fantastical stages. The game is not without its share of frustrations, but Sonic and the Secret Rings is certainly worth playing.

The story in Secret Rings is a slight departure from the usual Sonic the Hedgehog setup. One day while Sonic is sleeping, a genie visits him. The genie is from the book Arabian Nights, which is being destroyed by an evil genie known as Erazor. Apparently, if Erazor amasses enough power, he'll be able to leave the book and come to life to terrorize Sonic's world. Sonic has to put a stop to Erazor's plans by visiting seven different fantasy worlds to collect magic rings that can be used to restore Arabian Nights.

You play the game as Sonic and travel to seven fantasy worlds (plus one tutorial world). You'll travel to a dinosaur world, a floating ruin, a pirate level, and more. Each level has several different challenges for you to complete. The first challenge is simply to run from the beginning of the level to the end, but you'll eventually unlock much more interesting challenges. Some challenges require you to collect a certain number of rings, finish a level before a timer runs out, make it through a stage without killing a single enemy, or just kill a boss enemy. These different challenges add a lot of variety to the game, so even though you'll play each level 10 times or more, you'll find a unique experience each time.

The controls in Sonic and the Secret Rings are simple enough to pick up, but they can also be incredibly frustrating at times. You hold the Wii Remote sideways and tilt it left and right to move Sonic side to side. The 1 button makes Sonic stop and the 2 button makes him jump. With such simple controls, you'd think it would be a piece of cake to guide the hedgehog through each level. The problem is that most of the time you don't have direct control of Sonic's forward movement. Sonic automatically runs as fast as he can, and it's your job to make him jump and weave over and between obstacles. With all that forward momentum, the trick is to time your jumps and sidesteps just right to avoid the hazards in your path. That isn't easy, because the game moves so fast that you'll rarely have time to react during your first run through a level. After you've died and retried a dozen times and have the layout of the level memorized, you might be able to survive. The amount of trial and error required for most of the challenges is a bit extreme, and it will definitely try your patience.

In addition to running, jumping, and grinding on rails, Sonic can attack enemies by jumping in the air and homing in on them. When you jump, you'll automatically target the nearest enemy, and while you're in the air, you can quickly move the Wii Remote forward to home in on the enemy and kill it. You can chain these kills together to clear large gaps or wipe out large groups of enemies without ever touching the ground. The homing attack does make combat extremely easy, but it's used primarily as a way to get from one point to another anyway, so enemies could just as well be springboards or floating platforms instead.

As you complete challenges, you earn experience points and unlock new skills. These special skills do everything from increasing your maximum speed to giving you bonus rings. Before each challenge, you can equip these skills to your skill ring. You can only equip a certain number of skills, though, depending on how many skill points you have. You can have multiple skill rings set up so that you can adapt your skill set to fit any challenge. Usually though, you never have to bother with skills. A few of the skills are useful, but most of them are pointless. After all, you don't need to equip any skills to run fast and jump, which is just about all you ever need to do in this game.

The single-player game feels pretty sizable, although you could easily finish it in a weekend. There is a multiplayer game here, as well, which, as you might have guessed if you've played any other Wii game, involves playing dozens of different minigames that make creative use of the Wii Remote. This portion of the game lets you play against three friends or computer players in a series of minigames. The minigames each put the Wii Remote to use in ways different than the main game. You'll have to paddle a canoe, spear fruit with a sword, swing a large ball on a chain, shoot balloons, chop wood, and perform many, many more gestures with the remote. Most of the minigames are fun for at least the first couple of times you play them, but they aren't very different from the plethora of minigames found in other Wii titles.

The graphics are great in Sonic and the Secret Rings. Each level is large and has a great sense of scale, with huge dinosaurs, pirate ships, corkscrews, loops, and other structures to run on. The visuals are sharp and colorful, and you'll have a great time just watching Sonic run because the game provides the same thrilling sense of speed that made the Sonic games appealing in the first place. Impressively, the game keeps pace just fine as you fly through each level, without any slowdown throughout the game. Each level has a specific, usually high-energy theme that fits the action well. The tunes are so incredibly cheesy that they are funny, and they seem to be a perfect match for Sonic's early-'90s sense of style. The English voice acting during the lengthy cutscenes is awful, but at least there's an option to listen to the Japanese voices instead.

Whether you remember the glory days of Sega's mascot or are just looking for a new Wii game to bring home, Sonic and the Secret Rings is a solid choice. The gameplay is simple but challenging, and there's something incredibly satisfying about running really, really fast. The minigames aren't anything special, but together with the single-player game, they round out the package nicely. If you're looking for a game that provides a lot of thrills and enough depth to sustain them, you can't go wrong with Sonic and the Secret Rings. 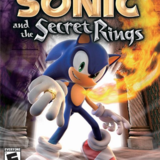 Sonic and the Secret Rings
Follow
$14.99 on Walmart
Buy 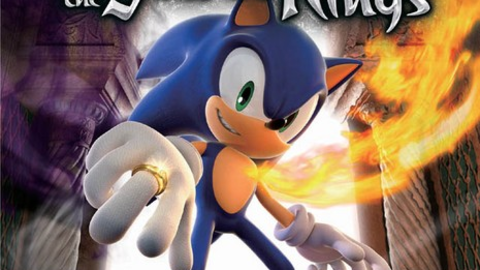 Sonic and the Secret Rings

Sonic, Sega's popular hedgehog hero, makes his debut on the Nintendo Wii in Sonic and the Secret Rings.

7.5
Sign In to rate Sonic and the Secret Rings