Smooth controls and a bunch of awesome tracks make this an exciting kart racer.

If you're trying to determine who the greatest Sega character of all time is, it's going to be pretty difficult to devise a competition in which Ulala and Sonic are on even ground. The Space Channel 5 star would win any dance-off (not even Michael Jackson stood a chance), and no one is stopping the blue hedgehog from grabbing golden rings. But if you put 20 characters from Sega's rich history into race-ready rides and equip them with all sorts of wacky weapons, then you might at least find out which of them is the best driver. Sonic & Sega All-Stars Racing closely follows the formula of the genre-defining Mario Kart series, but this arcade racer is far from a cheap cash-in. With 24 well-designed courses and ultraprecise controls, swerving your way to victory is a joy. Your favorite character may not have made the cut, but All-Stars is a lot of fun even if you're stuck with Billy Hatcher.

The 20 Sega characters in All-Stars Racing are an odd bunch, to say the least. A whopping seven of them have been pulled from the well-worn Sonic universe, though some of the lesser known entrants could have easily been scrapped to allow a few more franchises to share the limelight. It makes sense that the lightning-fast blue hedgehog and his evil nemesis Dr. Eggman made the cut, but would anyone really have missed Amy or Big the Cat? The 13 non-Sonic characters run the gamut from ridiculously obscure (Zobio and Zobiko from House of the Dead: EX) to cult favorite (Ryo Hazuki from Shenmue) to long-forgotten 8-bit star (Opa-Opa from Fantasy Zone). It's an eclectic cast that stretches through Sega's entire history, which should please anyone who's been following Sega since the Master System days. There is a slight difference in the lineup among the systems. The Wii version lets you play as your Miis while the Xbox 360 version gives you control of your avatar, as well as a kart with Banjo and Kazooie on board. Sadly, there are no such bonuses on the PlayStation 3.

Once you make the difficult decision between driving as AiAi or Samba, it's time to get a taste of the racing. The controls are tightly honed, making it easy to weave through traffic, slide around corners, and drop a few landmines in front of your unsuspecting competitors. Everything in All-Stars Racing feels just right, so within seconds of starting your first race, you'll be able to focus on positioning rather than wrestling with your steering. The most exhilarating aspect of the racing experience is the boost system. By holding down the drift button when you enter turns, you slowly build up your boost ability. The longer you hold it, the faster your burst when you finally release it, which adds a bit of strategy as you see how far you can tempt fate. The only control issue is some iffy collision detection when slamming into the environment, but occasionally getting stuck on a rock doesn't hamper the overall fun of flying around these tracks.

The smooth controls would be for naught if the track design couldn't follow the same high standard, but there is no such problem here. Each of the 24 tracks is filled with tight turns, wild jumps, and even a cleverly hidden shortcut or two, which makes it a lot of fun to repeatedly play them to find all their secrets. All-Stars Racing does a good job of easing you into the experience with the early tracks but doesn't make them so simple that veteran drivers will breeze through them. There are always enough tight turns and narrow pathways to ensure the racing stays intense. The only small problem with the tracks is that there isn't quite enough variety in their themes. Nine have been pulled from Sonic, and those only have three unique styles (casino, fortress, and green hill). The House of the Dead tracks are delightfully creepy, and the races through the brightly colored world of Samba De Amigo are a trip, but it would have been more interesting to have a few more franchises thrown into the mix.

Of course, you'll be doing a lot more than just slamming through hairpin turns and trying to land ridiculous leaps of faith. You pick up items as you make your way around the track, although these aggressive power-ups are not as exciting as the core racing action. You have a standard array of forward-striking missiles and tailgate-halting mines, and though they are often the key to victory, they are the weakest aspect of this game. Having a chance to make up ground when you slip behind is always welcome, but the items are, for the most part, bland and unoriginal, so they feel more like a necessary evil than an integral part of the racing fun. The one interesting aspect is an All-Star pickup that is unique for every character. This is your uberweapon so you only have a chance of nabbing it if you're getting beaten soundly. Seeing Sonic turn into a chaos emerald-fueled Super Sonic or Ryo hop on board a forklift is pretty cool the first time, but most of these items are little more than glorified speed bursts.

The two main single-player modes are Grand Prix and Mission. Grand Prix comprises six different cups with four tracks each, and you test your mettle against seven computer-controlled opponents. Beginner difficulty is easy enough, but advanced and expert pose a much stiffer challenge. The computer is without mercy, so expect to be peppered by items, shoved off cliffs, and given the sort of respect usually reserved for the likes of Shadow. Mission mode is objective based and has you striving to complete bite-sized tasks. Being asked to perform a certain number of boosts within a lap or collect coins as quickly as possible isn't too difficult, but to really prove your worth as an all-star racer, you'll have to earn a triple-A rating. This takes a bit of practice, and getting top marks in the more than 60 missions can take a fair amount of time. It's just a shame you have to play through these modes by your lonesome. There is no way to team up cooperatively with a buddy, which is a disappointment because previous kart racers have let you take on the uncaring computer with your best friend in tow.

Thankfully, there are enough competitive modes to almost make up for the lack of co-op play. Online, you're restricted to just racing, but because that is the best element of All-Stars Racing, it doesn't feel too limiting. Eight players can compete at one time, and you have the option to allow computer drivers or banish them from the track. Toggling items or rubberbanding on or off is also an option, so you can keep things hectic or make sure that skill is the sole determining factor. Sadly, there is no way to set up a Grand Prix of your own, so you're stuck with a series of one-off matches. The four-player split-screen mode works in much the same way, and in addition to races it supports a number of different battle modes. There is King of the Hill, Capture the Chao, and a few others, but they aren't all that fun. The items lack impact, so these modes feel like minor diversions rather than something meaty. All-Stars Racing is at its best when you're striving for the checkered flag, and the competitive races do a great job of bringing this excitement to the forefront.

The final piece that ties this great experience together is the impressive visuals. The courses are jam packed with details, some of which you’re unlikely to notice until you’ve raced them many times. The Samba De Amigo levels are overflowing with chaotic images. Cardboard-cutout suns smile down at the player, wooden kiosks line the track, and every inch is bursting with vibrant colors. Every course follows a similar mindset, packing the environment with so many little touches and nostalgic imagery that longtime Sega fans will swoon with delight. All of this detail does hinder the frame rate a bit, though. During particularly hectic sections, the game will stutter at times, though it's not enough to ruin your chance at victory. This is more noticeable on the PlayStation 3, especially online, but it ultimately isn't a huge deal. The game usually runs smoothly despite having so many elements burst off the screen, and the fancy graphics do a fine job of tying this entire package together.

Although the core of Sonic & Sega All-Stars Racing is obviously pulled straight out of Mario Kart, this wacky racer can stand on its own four wheels. The tight controls and excellent track design ensure that head-to-head competition is always exciting, but it's so fun just to play around with these karts that it’s easy to lose hours climbing the online leaderboards in Time Trial mode. All-Star Racing may not push the genre forward in any meaningful way, but it builds so well on established themes that it doesn't even matter. 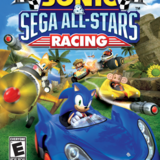 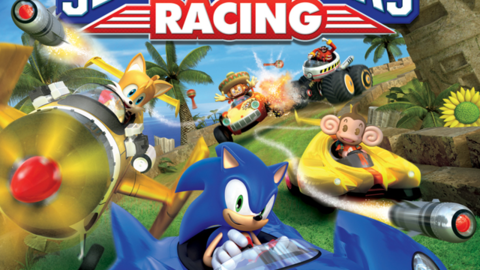