Sonic's new racing adventure speeds past its predecessor and delivers a kart racer that can keep up with the best in the genre.

Whenever Sega has released a mascot-fueled game, such as Sega Superstar Tennis, comparisons have inevitably been drawn to its Nintendo-developed counterpart. But Sonic & All-Stars Racing Transformed is far from a poor man's Mario Kart. Fun track design, a solid character roster, and a bevy of multiplayer modes make this one of the best games of its class.

Like its predecessor, Sonic & All-Stars Racing Transformed brings together a colorful cast of characters from many different beloved franchises. Many, like the popular Sonic and Knuckles, will be familiar even to the most casual Sega fans, while the likes of Golden Axe's Gilius and Vyse from Skies of Arcadia force longtime fans to dig a little deeper into their gaming memories. They are joined by guest characters Wreck-It Ralph, who fits in surprisingly well with the rest of the cast, and real-life racer Danica Patrick, who…well, she doesn't fit at all, really. Each racer has his or her own unique vehicle and associated stats, encouraging you to experiment with different styles.

But Sonic & All-Stars Racing Transformed doesn't depend on your nostalgia to be enjoyable. The core of the gameplay, the racing, is fast, fun, and easy to get into. The driving controls feel tight, allowing you to drift around corners and weave through enemy attacks with ease. When you bump into a wall, it feels like it was your fault, not the controller's. Drifting is as easy as holding down a button, and longer drifts earn you important boosts.

Items and weapons you pick up on the track work exactly as intended, and they do so in a well-balanced manner that prevents races from being decided entirely on one player's lucky item acquisition. You may still lose a close race due to a timely firework hit, but there is no "blue shell" equivalent to constantly ruin the fun of the racer in first.

Per the game's title, your vehicle transforms during a race into a car, boat, or flying vehicle, depending on the track's terrain. Don't be fooled into thinking this is merely aesthetic; each transformation handles differently, with track sections on water feeling more like Wave Race than a traditional kart racer. The flying sections feel the most different, because the ability to move up and down freely, as opposed to just left or right, makes a big difference not only in where you go, but also in how you use items. You're less likely to hit enemies with a weapon when they have an additional axis on which to move around and dodge.

All of this is complemented by wonderfully designed and often dynamic tracks that change as you race. You may make three laps around one track, but it won't always feel like the same track each time, because you might be forced onto a different route through the environment your second or third time around. You might spend most of your first lap on land while your second lap is much more water-based. Paths and shortcuts change, making it a bit harder to know an entire track by heart. The transformations are scripted--there aren't moments when you're changing the landscape at will--but they keep tracks feeling fresh longer. All levels are based on different games from Sega history, including a Nights level that's particularly good at capturing the look and feel of the game that inspired it.

You aren't limited to the standard Grand Prix style of events, although that's still available and done well. The more interesting mode of progression is the World Tour, which is a map full of events to play and earn stars through. Events range from simple races to more focused tasks like drift challenges, and each event has different difficulty settings. The higher the difficulty setting, the more stars you earn. Most new events are unlocked as you finish the previous event on any difficulty, though some gates to new events (as well as unlockable characters and car mods) require you to obtain a certain number of stars to move forward. You won't be able to see the end of the game by playing on easy the entire time.

While perfectly fine alone, Sonic & All-Stars Racing Transformed is more fun with friends, who can join you in all game modes locally, even World Tour and Grand Prix. So you are never forced to play alone if you don't want to, provided you have at least one friend to share your couch. The cooperative options aren't available online, though, where 10 players are limited to simple Race and Battle modes.

Sonic & All-Stars Racing Transformed is a joy to play and look at. The icing on this delicious multilayered racing cake is that the game launches at a relatively budget price of $39.99, despite being a quality product that would warrant a higher price tag. It has occasional technical glitches, but it's a high-quality experience that deserves a spot on the winner's podium with some of the best kart racers you've ever seen. 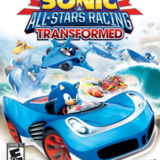