Sonic Adventure 2 is an addictive platform game, whose gifts beckon you to come back and enjoy its entertaining and fast-paced gameplay system.

Unlike movie sequels, video game sequels generally have a legitimate chance at being superior to the original. Developers are able to learn new hardware techniques and are able to create a more visually robust product with the sequel, and feedback from critics and consumers alike let them make specific tweaks to the gameplay system. Such is the case with Sonic Adventure 2: Sonic Team listened to the complaints about the first Sonic Adventure--the uninspired voice acting, the camera problems that interfered detrimentally with the gameplay, the tedious and often tiresome adventure sequences--and has responded with Sonic Adventure 2, a streamlined action game that gives a determined nod to the original, and still classic, 2D Sonic the Hedgehog games. The ghosts of those original 2D Sonic titles are exorcised in the game's amazing pace, heart-pounding platform jumping action, and in the unyielding barrage of creatively designed levels--much more so than the original Sonic Adventure. Although Sonic Adventure 2 isn't without its faults, the game is both entertaining and addictive, and will easily become one of the last great games on the Dreamcast.

The stages in Sonic Adventure 2 are separated into three distinct and familiar gameplay flavors. The levels for Sonic and Shadow fit most comfortably in the general platformer genre, as they are designed for action and a healthy dose of speed. This is where Sonic Team is at its best and most innovative. A typical foray through one of these levels involves running through giant loops, bouncing off springs, grinding rails, hanging onto flimsy vines, negotiating tiny platforms suspended in air, and even dealing with antigravity rooms in some of the later levels, all the while disposing of enemies and moving at blistering speeds. These stages are not for the faint of heart, as the action can become complex and grandiose, and requires quick reaction and impeccable timing. Simply put, those who enjoyed Sonic's levels in the first game will get a double dose of the same as Shadow joins the adventure.

Dr. Robotnik and Tails share stages that involve shooting action, as both characters pilot mechanized robots equipped with generous firepower. Although the objective is to reach the end of a lengthy level and involves a good bit of platform hopping, these levels are based on the shooting elements. You are able to lock onto multiple enemies by holding onto a button as you target these enemies and unleash a barrage of missiles destroying all of the targeted foes at once. The pace in these levels can be a bit blasé at times, particularly in some of the earlier stages, but the action does get pretty intense as the game wears on. Finally, levels for Rogue the Bat, another new character in the game, and Knuckles involve exploration. As with Knuckles' levels in the first game, the characters must float around and search large levels, while following homing signals and tracking down pieces of the master emerald. These levels move at the slowest pace of all the stages in the game, and some of the levels are entirely too large and can become frustrating at times. Although maybe not as extreme, sometimes it can be like searching for a needle in a haystack. Perhaps if Sonic Team put all of these levels on a timer, as it has with one of Rouge's levels, it might have been more interesting.

As the levels have become bigger and more complex in Sonic Adventure 2, the lead characters have mastered a handful of new moves and attacks to counter the new level designs and stronger enemies. Robotnik and Tails have powerful weapons-based special attacks, Rogue and Knuckles have new hand-to-hand combat moves, and Sonic and Shadow are both able to grind on rails and unleash special attacks, including the ability to stop time for a few seconds, call forth a lightning strike on an enemy, teleport, and summon a tornado. And the new moves are more than just eye candy, as Sonic Team has made it a point to incorporate these newfound skills into the gameplay. The rail-grind in particular is used liberally, specifically in the latter levels. For example, in one stage based outside a space station, both Sonic and Shadow have to negotiate a series of rails, suspended in space, to reach the end of the level. Throughout the course of the game, the new moves become an integral part of the gameplay and add to the game's excitement and fun.

However, there are a few elements that distract from an otherwise entertaining gameplay experience. The first is the game's camera system. Granted, the camera flaws in the original Sonic Adventure were infinitely more frustrating by comparison, the sequel does retain some of the quirky camera work. All too often, the character will need to jump across to an adjacent platform, and the automatic camera will assume a position where the platform the character needs to reach is entirely out of view. This is often referred to as a blind jump and is a cardinal sin in the platform game genre. The camera can be rotated manually using the shoulder buttons to view the platform, but once the character moves, the automatic camera reassumes control. It is a problem that could have been avoided by giving the player the option to use a manual follow-cam when needed. Aside from the camera issues, the boss encounters are also more muted in this latest game, when compared with the original. Sonic Adventure had some amazing boss fights, and although the sequel has a couple of these fantastic battles, in general the boss encounters aren't as ostentatious. If you've played the first game, you'll remember the battle against Robotnik, where he pilots a dragonlike machine, or the amazingly difficult final battle against Chaos. There are no boss encounters that even come close to matching the intensity and difficulty of those boss fights in Sonic Adventure 2. It is unfortunate, because the rest of the game is put together with so much care. Finally, the game's storyline is also responsible for dislodging a gameplay experience that is usually rather consistent and enjoyable.

Although the original Sonic Adventure had awful voice acting, the game's plot was relatively intriguing, particularly when considering the genre. Each of the characters had his or her own unique motivations and as the intersecting cutscenes played out, the storylines for each individual character intertwined adequately to create a cohesive plot. The sequel is exactly the opposite, playing out more like a Bizarro version of the first game in terms of how the plot and presentation come together. The voice acting, and the lip-synching in particular, is executed quite well in Sonic Adventure 2, but throughout the game the plot becomes more and more scattered and lackluster. Just when the story show signs of reaching a resolution--for example, when the true identity of Shadow is revealed--it folds back onto itself and moves into an entirely different plotline, never reaching a true resolution. Unlike the original Sonic Adventure, which ends with the climactic battle against Chaos, the sequel finishes with a whimper. Naturally, being a platform game we weren't expecting a tear-jerking storyline, but the plot in Sonic Adventure 2 is so jumbled that you might lose interest. It's almost as if the cutscenes were thrown in to serve as filler between the game levels.

Gameplay issues aside, Sonic Adventure 2 does improve graphically over the original. When Sonic Adventure was released alongside the North American launch of the Dreamcast, it was generally heralded as the most visually impressive platform game of its time, and Sonic Adventure 2 looks even better. The characters are modeled using more polygons and as a result look much smoother and more convincing than in the original. But perhaps more noticeably, the texturing has been improved, as the environmental textures in particular are cluttered with large amounts of detail. Some of the later stages have visual effects and feature extravagant 3D objects, which are more impressive visually than in the original game. The frame rate has also been improved. Although the first game had relatively stable frame rates, there were moments of annoying slowdown. But those problems are a thing of the past, as the frame rate in the sequel remains blistering and rock solid throughout.

The sound effects in Sonic Adventure 2 are generally the same as any other Sonic game, which work just fine. The voice work, as mentioned previously, is better than the original Sonic Adventure and adds further believability to the game's real-time and prerendered cutscenes. The original Sonic Adventure had a campy glam-rock and J-pop soundtrack. The sequel for the most part disposes of the song lyrics and features music-only tracks that are heavy on guitar riffs. Sonic Team has taken a utilitarian approach to the game's music.

Perhaps, therein lies the primary flaw in Sonic Adventure 2, the game meets, but hardly exceeds, expectations. Although Sonic Team has rectified many of the problems that plagued the original, the sequel isn't as deep, and in fact the overall gameplay time isn't as long as the first game. Sonic Adventure 2 lasts for about 12 to 15 hours. The secondary modes such as the two-player head-to-head racing and arena battle options, a generally useless kart-racing mode, and the Chao development, racing, and breeding options are interesting, but the game's primary story mode doesn't last as long as it should. Compounding the problem, Sonic Adventure 2 is also devoid of the many entertaining boss encounters--featuring the traditional, gigantic enemies--that were so prominent in the original. However, having said that, Sonic Adventure 2 is an addictive platform game, whose gifts beckon you to come back and enjoy its entertaining and fast-paced gameplay system. Unlike the original, Sonic Adventure 2 takes a more direct approach to platform gaming, and the result is a game that gives a greater nod to the original 2D Sonic games, much more so than the first game. Despite its flaws, Sonic Adventure 2 is easily a must-have game for fans of the platformer genre in general and the original Sonic games in particular. 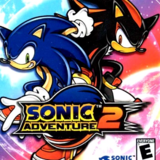