This shooter is a painful exercise in pattern memorization plus frustrating trial-and-error gameplay.

If you've ever wondered what happened to the Soldier of Fortune franchise, you're not alone. The first two Soldier of Fortune games were popular shooters in their day, blending fun single-player and multiplayer gameplay with the concept of playing as a mercenary. But after 2002's Soldier of Fortune II: Double Helix, the franchise seemed to fall off the face of the planet. Unfortunately, it should have stayed missing in action because the series has been resurrected with Soldier of Fortune: Payback, a shooter that embraces all the wrong lessons that have been learned over the past decade.

At first glance, Payback looks like a very pretty game. The visuals aren't cutting-edge, but there's an attractive quality to them, from the lavish depth-of-field blur effects that kick in whenever you reload your weapon to the lush lighting. You no longer play as John Mullins, the hero of the first two games, but rather as a new mercenary caught up in a very cliché and badly told tale of a worldwide terrorist organization that's so clever it brands all of its operatives with the very same tattoo on their necks. It's a wonder they're so difficult to find.

However, it all goes downhill quickly because Payback reveals itself to be a relentlessly linear and highly scripted shooter with a lot of flaws. Perhaps the most frustrating of these deals with the fact that the game relies on a checkpoint save system with no ability to quicksave, which means that if you're killed, you have to restart from the last checkpoint. That wouldn't be so much of an issue if those checkpoints were frequent and numerous, but they're not. Thus, much of the game's six to eight hours of gameplay is spent trying and retrying to get through the many sections of the game. Though there's a regenerating health system, you still die all too easily. It's not uncommon to have to replay a section a dozen times or more before you finally beat it.

The artificial intelligence is bad and consists mainly of two scripted actions. Once triggered, a bad guy will either run straight at you or stand in the open and shoot at you. There's no sense of dynamic behavior in the way the AI reacts to what you do. The weapon modeling is nonexistent; there's practically zero recoil on any of the weapons, even the light machine guns. On the flip side, even though the weapons all feel incredibly lightweight, they do a ridiculous amount of damage. The first Soldier of Fortune games were "edgy" in that you could practically dismember opponents with gunfire. The same goes for Payback, though it looks like the developers just copied and pasted the same code from the earlier games because the visual effect is almost exactly the same. Arms, legs, and heads all get shot off with absurd regularity while blood gushes everywhere. (The game does boast a low violence option that tones down this carnage.)

The music is actually pretty catchy, but the rest of the audio is lacking. The sound effects all seem canned, and the voice acting is terrible. The script certainly doesn't help either because the dialogue would be fitting for a straight-to-VHS action movie. The game also ends in a silly cliffhanger that assumes that gamers are going to want more of this action.

Additionally, Payback's multiplayer is very generic, with such modes as deathmatch, team deathmatch, and capture the flag. There's a whopping five multiplayer maps total, so there's not a lot of variety there either, which is also disappointing, considering Soldier of Fortune II's popular and fun multiplayer mode.

The PC game is slightly less expensive than major titles, but the Xbox 360 and PlayStation 3 games are full priced. Nevertheless, they're all a terrible value proposition considering the sheer quantity and high quality of shooters this year. Unless you like pain and frustration, there's simply no reason to play Soldier of Fortune: Payback when there are so many other better games on the market. 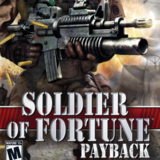 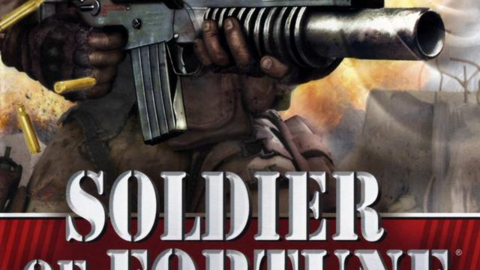 Soldier of Fortune returns with a vengeance.