It may not offer much of a challenge, but Solatorobo: Red the Hunter has enough variety and quirky charm to stand out from other action RPGs.

UK REVIEW--Given its origin, Solatorobo: Red the Hunter is long overdue. It's the spiritual successor to Tail Concerto, a PlayStation game that was released to little fanfare way back in the late '90s, and a lot of that game's key elements have been lifted over into the developer's latest offering. What this game lacks in challenge, it more than makes up for in charisma, thanks to a well-concocted mix of lighthearted subplots married to simple yet enjoyable combat, role-playing and puzzle mechanics.

Solatorobo puts you in the role of an anthropomorphic lead character who never serves any role other than to be the standard plucky hero. Red Savarin is a breed of leading (fox)man that treats all adversity with a typically forthright attitude, albeit in the most civil-minded manner possible. As an adventurous bounty hunter, his livelihood consists of darting around from one place to another in search of any quick and easy job he can get his paws on. Both the main game and the myriad side quests you encounter are threaded into this narrative conceit, as Red and his loyal sister, Chocolat, continually search for paid work both grand and menial atop each of the Shepherd Republic's floating islands. At first, the game introduces the pair as seemingly flawed if dedicated practitioners of their roaming craft, but this relatively interesting hook is quickly abandoned in favour of pulling all involved into typically catastrophic world events instead.

Whether bounding about on quests or merely journeying through towns, you spend the majority of time piloting a single-seater mech called the DAHAK. Nimble controls ensure that directing this midsized robotic beast is always an easy task, and it's a nicely animated piece of machinery to boot. The DAHAK's primary function is to lift and subsequently throw heavy objects, which you do ad nauseam for several overtly simplistic puzzle sections from beginning to end. These sections sometimes force you out of the mech to travel on foot and explore the game's small-scale dungeon areas, but you predominantly use the DAHAK's lifting and jumping abilities to open up new passageways until the level is complete. Unremarkable it may be, but the platforming and exploration still manages to be enjoyable in spite of its basic mechanics.

The DAHAK can also hold its own in a fight. Combat is only marginally more demanding than the puzzle solving, but is similarly routine in its execution. You use your mech to pick up and throw enemies in succession until their life bars deplete, periodically jumping to avoid attacks and dashing to flank larger foes from behind. Many of these larger mechs also require specific attack patterns to defeat, while smaller enemies are more agile and need to be eliminated quickly. You find upgrade modules hidden throughout the world that you can use to improve the DAHAK's abilities like movement speed and attack damage. Purchasing allocated slots and arranging your mech's parts to fit into a finite inventory space is a head-scratching puzzle all on its own, but the combat is so inherently easy that you probably won't spend too long worrying about it anyway. Even at its most frenzied (a term loosely applied here), the combat could be labeled most appropriately as something akin to My First Air Juggles--the action never demands too much of you.

All the working systems are still fun to play regardless of their simplicity, and everything moves at such a steady pace that the experience is rarely boring. Serviceable minigames, such as racing and fishing, help to bolster the already expansive set of quests and inject a healthy dose of variety into the critical path; however, they probably won't inspire you to revisit them outside of compulsory story segments. There are also a fair number of collectibles for obsessive types to keep an eye out for, all of which are effectively tied together as minor quests with their own individual narrative attractions.

Because you're asked to take on side quests before the main story can progress, Solatorobo's structure relishes more in moments of quirky intrigue than taking itself too seriously. You encounter a host of oddly entertaining characters during quests, including a rotund photographer who's had his most prized photographs stolen and a conspiciously rugged female quest giver who harbours an awkward crush on poor old Red. Not all quests are winners, but there are many that feel right at home--you even become embroiled in a brief investigation at a friend's house at one point. Granted, the over-arching narrative does fall victim to overdramatising its plot, but the unique quest lines and random pockets of contextual storytelling are most amusing. Competent translation also helps to increase attachment to the game's characters and dialogue, although you're unlikely to find any one particular character involved in the narrative to be hugely memorable when all is said and done.

Each island boasts a wealth of sights to marvel at. Bright colours and great detail help punctuate the lush 2D backgrounds of towns and environments, adding a level of texture to surrounding locations that makes just running around a pleasant experience. Alongside the inclusion of unintrusive anime shorts and some pleasingly upbeat music throughout, Solatorobo adopts the hardware capabilities of the DS in some really effective ways.

Much of Solatorobo feels conventional and it doesn't quite reach the soaring heights it could have. But between its breezy gameplay and occasionally offbeat personality, it's a game that fully understands its simplicities and confidently turns them into its merits. As long as you can appreciate its leisurely nature for the protracted duration, you'll find a bounty that's absolutely worth hunting for in Solatorobo: Red the Hunter. 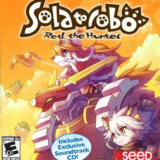