It's a new twist to the series, but if you like stealth or strategy games, you'll probably like Tactical Strike.

If you played any of the Full Spectrum Warrior titles, you probably have a good idea of what to expect from the awkwardly titled SOCOM: U.S. Navy SEALs Tactical Strike. That is to say, this isn't a typical shooter in the vein of most SOCOM titles. Rather, it's a strategy game in which you stealthily maneuver a team of four Navy SEALs through sprawling, labyrinthine levels. You don't control any of the squadmates directly; rather, you issue abstract commands to shoot, throw grenades, snipe, move, and more--and the artificial intelligence handles the rest with surprising efficiency. It's a tight, satisfying gameplay model that's fundamentally enjoyable. You will have to overcome some obstacles to fully enjoy it, though, in the form of a cumbersome camera, lengthy loading times, and often unbearably laggy online play. These aren't ruinous factors by any stretch, but they do impact the overall experience.

The finely paced campaign is the game's best facet, though the political narrative that holds it together is far from intriguing. In its defense, the simple setup concerning a kidnapped ambassador does get a bit more involved in the later missions, but it's really just an excuse to throw your team into expansive, cluttered environments littered with evildoing gunmen. Fortunately, there are a lot of opportunities to hide and sneak, since Tactical Strike requires as much stealth as it does strategy. You'll spend a good deal of the game moving your team behind various objects and taking potshots at enemies from behind them.

You can move your team as a whole, or separate it into two squads of two SEALs each. Either way, you hold down the circle button to bring up a movement reticle, move it to the desired location with the analog button, and your squad sneakily makes its way to its destination. This works pretty well, but in corridors and tighter areas, it takes some maneuvering. Sometimes, aiming your main view at a relatively distant location and pressing the move button will cause the movement indicator to appear more or less where you wanted it to. When it doesn't, you need to position it manually. Since the targeting reticle is glued to the ground, you'll sometimes need to push it around corners or down a flight of steps. That's not a big deal in theory, but since the game camera is always pointed at any given squadmate, it takes a bit of micromanagement to move around twisty, confined spaces. It's a particular nuisance when turning corners, since you may not know if there is an enemy hiding there, nor can you tell if there's any cover to hide behind. In the end, you'll often be commanding your squad around corners blindly, which is a shame, since the rest of the stealth mechanics are quite good.

Those mechanics will have you sniping distant foes, throwing grenades, firing weapons, breaching doors, and more. Regardless of which choice you make, you select your action from a menu and the artificial intelligence takes care of the rest. The friendly AI does a bang-up job for the most part, and the game nicely walks that tightrope between player involvement and automated actions. You can command your squadmates, but they'll also follow your lead, and intelligently respond to enemy attacks. They'll duck when fired upon, run away from grenades, wait for enemies to emerge from cover before firing, and, when breaching, will take appropriate cover whenever possible.

Enemy AI does a semidecent job of keeping up. Adversaries will reposition themselves for better shots, duck behind cover, and take other actions to avoid slaughter. It does some dumb things here and there, however. Foes will sometimes run out into the open for no obvious reason, get stuck in one spot and jitter around, or pay no attention when a teammate falls over dead right in front of them. There are also some annoying escort operations in which civilians will accompany you. The game apparently classifies them as squadmates when they join you, so the weaponless friendlies will often move ahead of your team and right into harm's way. Luckily, you can order them to stay put.

Yet in spite of all these nitpicks, Tactical Strike is an enjoyable game that rewards your patience with a good bit of tense, tricky gameplay. Levels are strikingly vast, so most mission objectives can be reached in a variety of ways. You can fight your way through, one enemy at a time, using standard weapons. Or, you can get to a balcony for a good vantage point for sniping. You can also sneak past completely unnoticed (a particular joy in the nighttime missions). Other times, you'll need to separate your two squads for maximum effectiveness. You'll fight in a number of great environments, from urban warehouses to rural fields, and all of them provide plenty of opportunities to find cover, scout for enemies, and generally be a nuisance to your foes. Don't assume this means the game is easy, though. You need to take care with every move and every positioning, lest you leave yourself open to enemy gunfire, and some objectives will require a little trial and error until you find the best way to accomplish them.

The missions are long, sometimes taking over an hour to complete, yet the maps are so open-ended that the campaign never wears out its welcome. Once you're done, you can try out the multiplayer options, which allows up to four players to battle it out either locally or online. It's an excellent suite of multiplayer features, featuring five total modes and a host of personalization options. Free for all and suppression are your standard deathmatch and team deathmatch modes, respectively. In extract, the special forces team attempts to escort a VIP to safety, while the mercs try to eliminate him. The two best modes, however, are collateral damage and demolition. Demolition is an attack-and-defend mode, in which one team defends an object (such as a helicopter) while the other team tries to destroy it. The result is often an intense standoff that hinges on smart use of grenades and teammate revival. Even better is collateral damage, which is like demolition on steroids. Here, one team tries to destroy a number of vehicles, and the defending team must protect them. It requires more movement and more teamwork than the other modes, and adds a degree of urgency sometimes missing from the single-player game.

You can further tailor matches by disallowing certain weapons, or prohibiting players from reviving downed squadmates. Tactical Strike even supports voice chat, and it seems to work pretty well. What wasn't so grand is how laggy most of our online matches were, both when hosting and joining other players' games. At times, it took several seconds for our squad to respond to our command. Other times, the game would completely freeze for three or four seconds at a time. Even in ad hoc play, there were annoying moments of instability where squads took two or three seconds before responding to orders while the UMD spun madly. Without these issues, Tactical Strike could have been as good as any other online game for the PSP.

Tactical Strike looks and sounds fantastic. The levels are enormous and detailed, filled with lush foliage and decrepit vehicles. Buildings like mansions and churches are rendered beautifully, with clean textures and nice lighting effects. The splendor comes at a price, though, in the form of frustratingly long load times. They're most annoying when you fail a mission and have to restart from the last checkpoint, which requires you to go back to a mission select menu (which takes a while to load) and then return to the level (which takes even longer to load). The impressive visuals are accompanied by solid sound effects and great voice acting, both in English and in other languages. It's sincerely a treat to use a Korean or Spanish team in multiplayer matches, simply to hear the enthusiastic cries of squadmates in their respective languages.

Tactical Strike is a departure from the standard SOCOM gunplay, but it's still worthy of consideration, both from those who enjoy the series and those who like measured tactical gameplay. A few frustrations get in the way of the fun from time to time, but this is still a good strategy/action hybrid that delivers on multiple fronts. 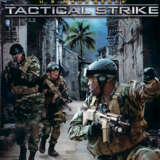