Fireteam Bravo 3 has the makings of a rewarding shooter, but it lacks the freshness and tactical depth that made its predecessors so engaging.

Within two years of the PSP's launch in 2005, the first two SOCOM: U.S. Navy SEALs Fireteam Bravo games set the standard for tactical shooter action on the system with great controls and lengthy, diverse missions. After a three-year hiatus, the Fireteam Bravo series is back, but the once-impressive action has lost its luster. The tactical edge has been dulled by regenerating health and limited mission objectives, and as a result, the sturdy campaign doesn't pack much of a punch. Taking advantage of the new four-player cooperative mode makes the not-very-challenging missions even easier, and ratcheting up the difficulty level is the only way to prevent a one-sided massacre. The extensive and customizable armory is still a highlight, and wielding your favorite weapon in 16-player online matches has lasting appeal. But though the multiplayer still has some kick and the core action is technically solid, Fireteam Bravo 3 never really does anything to grab your interest and ends up feeling like a deflated, merely functional echo of its predecessors.

The campaign chronicles a new mission for the SEALs that takes them into the fictional republic of Koratvia where they are investigating a potential terrorist threat. The voice acting is good and the cutscenes are decent, but unfortunately, the characters and the story are dull and cliched. When you take on a quick snatch-and-grab mission, there's no doubt in your mind that things won't go as planned, and every subsequent plot development is as predictable and uninteresting as the last. Fireteam Bravo 3 doesn't give you a story worth caring about, so each mission feels like you are just going through the motions.

The eight campaign missions take place across the gray, snowy, Eastern Bloc environs of Koratvia. Though the levels are often drab, each map is large and features a diverse array of enemy encounters. You infiltrate buildings, sneak through narrow streets, traverse snowy outposts, and engage in heated urban firefights. Yet despite the environmental diversity, your mission objectives are all very straightforward. You accomplish primary objectives simply by moving through the linear levels and killing enemies. Most secondary objectives just involve poking your head in every room and down every alley, looking for intel or targets of opportunity. The only time you actually have to vary your tactic of go-there-shoot-them is when you are challenged to maintain stealth through a certain area. Using silenced weapons doesn't guarantee stealthiness, and sneaking up to perform a stealth kill takes patience. These objectives present a welcome change of pace, and quietly completing them is quite enjoyable.

Most of your engagements are loud firefights, however, and clearing an area of enemies is inherently satisfying. Like previous games in the series, Fireteam Bravo 3 uses a lock-on mechanic to handle aiming. You press the R button to target the nearest enemy and tap L to switch targets. Each weapon has certain attributes, including range, which determines the distance at which you can target an enemy. This requires some consideration (you won't be able to target an enemy across a large courtyard with a shotgun), but the suggested loadout will almost always outfit you with an assault rifle, ensuring that your enemies are almost always in range. Running into an area with guns blazing can be dangerous, but if you shoot from doorways, duck behind cover, and minimize your exposure to enemy fire, you won't have much trouble dispatching your enemies. Unless you get cocky or turn up the difficulty, Fireteam Bravo 3 is not a particularly challenging game. While you can't just run and gun, the game doesn't feel like a tactical shooter. If your health gets low, you merely duck out of your enemy's sightlines and wait for it to regenerate. There is no urgency and no tension, which leaves the action feeling flat.

Given that the game doesn't provide much excitement, it helps to try to make some of your own. One way to do this is by exploring the extensive armory. There are more than 65 primary and secondary weapons in the game, not to mention claymores, C4 explosives, and grenades (complete with awkward and inconsistent throwing mechanics). Each weapon can be modified with attachments, ranging from optical and laser sights to silencers and under-barrel grenade launchers. Experimenting with weapons and modifications can help make missions more interesting because you have to adjust your tactics to suit your loadout. You can also tweak your squadmates' loadouts to complement your own, and the friendly AI does a good job of covering you and killing enemies. There are a number of squad orders available to you, but aside from breaching doors and going into stealth mode, they are largely unnecessary and unhelpful. Despite their combat prowess, your squadmates need to be watched because if they are down and bleed out, you fail the mission. Fortunately, they revive each other pretty well, though you will have to come to the rescue from time to time. Oddly, you are given no such luxury. When you are incapacitated, the mission is over because, apparently, you are of weaker constitution than your AI teammates.

If, however, you are playing cooperative missions, then you can survive long enough to be revived. Yet given the default difficulty, a team with two or more human players shouldn't have much trouble. Playing with other humans is naturally more entertaining, but you'll have to ratchet up the difficulty level if you want any sort of challenge in the cooperative campaign missions. Alternatively, you can select a segment of the campaign and create a custom mission. You can set parameters for enemy frequency and toughness then decide what kind of objective you want to fulfill. You can even make solo custom missions in which the only teammates you have are your primary and secondary weapons. Replaying the action doesn't make it much more exciting, but completing missions in solo or co-op play earns you credits that you can use toward purchasing new weaponry, so at least there's some tangible reward. There are also medals that serve as in-game achievements, bestowing rewards like bonus credits or new unlocks.

Perhaps the strongest element of Fireteam Bravo 3 is the online competitive multiplayer. Up to 16 SEALs and mercenaries can battle in SOCOM versions of familiar modes like free-for-all, team deathmatch, capture and hold, demolition, and escort. This variety of game types is spread over eight large maps with little to no lag, even with voice chat enabled. Fighting against and working with human enemies is engaging, and getting creative with your loadout can catch your opponents off guard. There is also a ranking system and clan support, and the online multiplayer action is competitive, entertaining, and rewarding.

Unfortunately, the online multiplayer is about the only part of Fireteam Bravo 3 that can be called entertaining. The game is thoroughly competent, but there is little to capture your interest. The mission structures lack creativity, and the bland story casts a pall of boredom over the whole campaign. Fireteam Bravo is technically sound, but without any tactical tension or invigorating spark, the game feels lifeless and hollow. 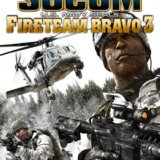