The excitement and tension of SOCOM's signature combat are blunted by technical issues in the series' multiplayer-only PlayStation 3 debut.

SOCOM fans who have been eagerly awaiting the venerable series' return to consoles should be warned: You may not get all that you've hoped for in Confrontation. The beating heart of the series--the realistic, tightly wound tactical combat--is still healthy, but Confrontation's arteries are clogged by network issues, control hang-ups, and graphical hitches. Those who enjoyed previous SOCOM games may be able to push through this malaise, but with no single-player campaign to cut their teeth on, newcomers will likely find the game inaccessible as its myriad problems compound the already steep learning curve. Though there is still some life in it, Confrontation is a disappointingly anemic entry in this historically hot-blooded series.

A multiplayer-only shooter lives and dies by the pace and precision of combat. SOCOM has always strived for a realistic feel by arming players with finely tuned real-world guns, limiting their speed to reasonably human levels and making them as vulnerable to bullets as actual soldiers. Hostile encounters are over in a matter of seconds, so positioning and accuracy are paramount to survival. At its best, Confrontation stands on this knife edge of precision and imbues firefights with a tense, desperate energy, amplified by the fact that in many matches, you won't respawn if killed. The thrill of victory is exulting; the agony of defeat is crushing.

Alas, these emotional highs and lows are often muted by Confrontation's technical problems. Hiccups of lag will sometimes pop up during intense encounters, turning a tightly contested fight to the death into a crapshoot. In a match where you respawn, this is merely frustrating; in one where death means becoming a spectator until the round is over, it's downright aggravating. These hitches can also cause control issues; you may find that your reloading process gets interrupted or that you've brought up a screen-commandeering command menu rather than initiated voice chat. The margin for combat error is so slim that any of these snags can sabotage even the most skilled player. It's possible to savor many a match without encountering these issues, but the times you do get hung up are sure to leave a sour taste in your mouth.

Before you jump into combat, you'll want to customize your loadout. SOCOM's signature depth in this department is back on display, offering you a number of guns that look and sound realistic, as well as a full complement of scopes, sights, and other attachments. In addition to customizing your primary and secondary weapons, you can choose two gear items from a diverse list of grenades, explosives, and rocket launchers. You can choose to be quick and lightly armored, slow and heavily armored, or anywhere in between. These options significantly affect your play style, and adjusting them (either from the initial menu or after you die in a match) is quick, easy, and engaging.

Once equipped, you'll dive into the PlayStation Network in search of a game. This can prove to be time-consuming as you choose an appropriate channel, find a game with an opening, and wait to spawn into the action. Fortunately, there are plenty of players online, and communicating with them via headset or preset text commands works smoothly. Despite--or perhaps because of--the robust population, there are a host of network issues to contend with, from pace-killing lag to straight-up system crashes. We played for three full days and hard crashed at least twice each day, losing our session stats (only recorded during ranked games) in the process. Though some players appear to have earned ranks and joined clans, we had difficulty with both, meaning that all of our matches were stand-alone affairs, with no lasting benefits or repercussions.

The conflicts you do engage in will unfold on maps of varying sizes, each depicting a different war-torn environment. Many of them are updated versions of maps from previous SOCOM games, and they are all cleanly textured, though not quite beautiful. Each is also well designed enough to simultaneously create chokepoints and allow for diverse pathfinding. The draw distance is formidable, and you'll find yourself spotting enemies that are far outside the range of most weapons. This makes the sniper rifle very dangerous, so you'll have to be extra alert, hoping to spot enemy snipers before it's too late and the death camera swings away from your corpse to show you the position of the enemy you failed to notice.

Death comes quickly to the careless, and players will have to embrace this harsh truth to stand a chance of survival. Sticking with your teammates is essential, and all of the varying mission objectives are more easily accomplished when you work as a unit. Though many players seem to default to the run-and-gun tactics prevalent in other online shooters, some verbal nudging (or a few failed missions) is usually enough to inspire a little unity. Achieving victory as a unit is satisfying, even more so when you know it's because you had your teammate's back and gunned down his would-be assassin.

The reality that you could be killed at any time ratchets up the tension a few degrees, but it also fuels the fires of frustration when you find yourself getting hung up on environmental obstacles. Despite the third-person viewpoint and your ability to jump and climb over impedances, you'll still find navigation to be somewhat finicky. Rubble that could be easily stepped over might require a full-on leap, and a curb that seems easy to jump may demand a time-consuming clamber. Small spaces can be similarly misleading, and just because you can see between balcony railings or two adjacent boxes, it doesn't mean you can shoot through the empty space. The Sixaxis-controlled lean allows some flexibility, though maneuvering into a good lean-friendly position will often leave you exposed to the very line of fire you're trying to evade.

Confrontation tries to re-create the wire-tight combat that made the SOCOM series so popular, but as of now, it hasn't succeeded. There are excellent moments to be found, and the heart of the action still beats strongly. However, the positive elements are overshadowed by pervasive network problems. Folks interested in accessorizing can pick up the Bluetooth headset retail bundle for $59.99 (the headset alone retails for $49.99) and get the game for cheap, but even at the discounted download price of $39.99, Confrontation is hard to recommend. 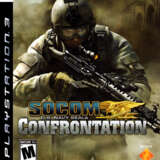