SK2 might be the best party-racing alternative to Mario Kart 64.

The kids are back, and Snow Town's under siege by some bratty little punk named Damien. Arriving surprisingly fast after the debut of the original game, Snowboard Kids 2 brings back the same style of simple snowboarding action with a whole host of options to make your gaming experience as complete as can be. For anyone new to Atlus' funky little racing game, Snowboard Kids 2 offers a touch of Cool Boarders, with a dash of Wipeout thrown in for good measure. You pick one character out of a posse of ten-year-olds. The characters range from the "naughty" Slash Kamei, to the mega-genius Wendy Lane. The characters have different attributes, which give them distinct advantages, depending on which course you're playing: speed, shooting, or tricks. Adding to the flexibility of the game are the different boards, which cover speed, balance, and tricks.

Gameplay consists of the usual zooming-down-the-course action, with a few twists to keep the action fresh. Among the variety of slopes and courses available (Sunny Mountain, Turtle Island, Jingle Town, Wendy's House, Linda's Castle, and Crazy Jungle) are numerous obstacles and varying course elements, like waterfalls and steep cliff drops. If those weren't enough, there are also offensive and defensive weapons available (hence, the Wipeout comparison). There are a bunch of great weapons that can quickly change the outcome of the game. The slap stick, for example, will smack your opponents to the ground and take some of their money while it's at it. The parachute attack will lift your targets high into the air and drop them slowly to the ground, giving you plenty of time to overtake them. Other weapons, like the snowman, whirlwind, freeze shot, and super ghost can also cause much consternation for your opponents. Of course, to counter players who may be drawing a bead on you are items like the speed fan, rocket booster, rock, and rat face. Each of these has different effects that can save your place in the race, if need be. While the steering and feel of the game could be a little smoother, once you get used to the semi-wooden controls, things go much easier.

After you select story or action mode, you will eventually run into a couple of boss encounters that will test just how much you've learned in the preceding races. You will run into a snowman-robot stage and a dinosaur stage that will test just how good your snowboarding skills are. During each race, you'll head into Snow Town where you can do a little shopping and board customizing. As you earn more money, the quality of board you can buy will improve as well. You can also go into the paint shop and select a new paint job for your snowboard. Other places you can go include Wendy's Internet cafe, where you'll get secret information on courses and other factors in the game. You can also change your character at the school, save at the phone booth, and play a number of different games at the penguin house, clock tower, and Snowboard Times office. Simply put, there's plenty to do in Snowboard Kids 2, and it'll take you a while to unlock all the game's secrets.

While it plays a little stiffly, the game still looks nice, with colorful graphics, very little polygon draw-in, and upbeat musical tracks. Peppered with lots of cute little cutscenes, Snowboard Kids 2 offers plenty of replay value and is one of the best racing games out there for a younger audience. Yes, a younger audience. Aimed squarely at the young 'uns, Snowboard Kids 2 is probably one of the best games you could get for a younger gamer. Older vets might find the game tedious, although it would take a real cynic to deny the effort involved in making this game. With the four-player mode offering decent multiplayer options, albeit at a much slower framerate, SK2 might be the best party-racing alternative to Mario Kart 64. Much less contrived than Diddy Kong Racing, Snowboard Kids 2 comes highly recommended for the younger crowd. Experienced gamers might want to rent it before spilling the greenbacks for this cute game. 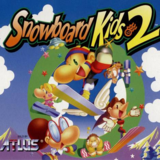 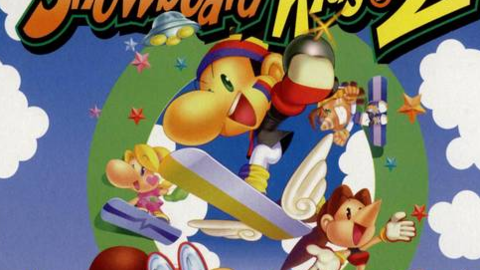 SK2 might be the best party-racing alternative to Mario Kart 64.