As a Switch launch title, Snipperclips does little to sell the unique features of Nintendo's new console. Playing the game on the go isn't ideal, since the Switch's small screen and the bumpy nature of playing it in cars (or buses, trains, or planes) derails some of the accuracy needed to complete its puzzles. The game also doesn’t make use of the Joy-Cons' advanced haptic capabilities, meaning there's no real benefit to playing with the minuscule controllers--even though you're forced to do so.

So, no, Snipperclips isn't a game you'd buy to show off the capabilities of your sweet new Switch. But it is a game you should play because of its interesting mechanics, fun puzzles, and great cooperative play (and griefing possibilities). Snipperclips makes the most of its unique premise--often in surprising, challenging ways.

The game's base mechanic is simple enough: You--an anthropomorphic piece of paper--can cut up to three other players into various shapes in order to complete objectives and puzzles. At its simplest, it could be something as straightforward as snipping each other in order to fit into a specific silhouette or cutting a larger piece of paper into a certain shape.

Snipperclips doesn't stay simple very long, though--the game does an admirable job of presenting engaging, challenging tests built off its simple setup. Some puzzles task you with figuring out how to manipulate several gears and switches in order to move an object from one side of a level or another, while others require you to figure out a way to herd fish to a specific location. Some of the game's best levels are even more intricate--in particular, the ones that require you to control a princess avatar through a path you've had to cut out of a single sheet of paper.

The solutions to these levels are sometimes apparent, but most will require some creative thinking and a fair amount of trial-and-error. Thankfully, the process of uncovering these solutions is usually engaging, especially when playing with a friend or three. Snipperclips excels as a cooperative experience, and it's a particularly accessible one given its relatively sedate pace. There's no time pressure or twitch reflexes needed--finding the solutions to puzzles requires teamwork, lots of conversation, and perseverance.

Surprisingly, Snipperclips also plays pretty well as a solo experience, with a significant amount of the game's puzzles able to be completed alone. When playing solo, you still have to control two paper characters (switching between the two, as opposed to playing concurrently), and it's certainly a good challenge to figure out the sometimes-intricate step-by-step process you need to go through to complete objectives. You'll need a mountain of patience, though--having to do everything on your own while you're swapping between characters means an extra level of finesse is required, and because it takes so much longer to set up the solution to a puzzle when playing alone, having to start from scratch when you make a tiny mistake can become frustrating.

It's a lonely pursuit, though, because Snipperclips works best as a shared experience. When you're working with friends and you do finally complete a tough level together, the sense of accomplishment and camaraderie is palpable. Unfortunately, there's no real reason to replay levels--once you've figured out a solution, there's no incentive to try again, since there's no tangible benefit to finding out more efficient solutions. Snipperclips is indeed engaging, but it's likely something you'll only ever play through once. It isn't a Switch showstopper, but when a game is this inventive and appealing, it doesn't need to be. 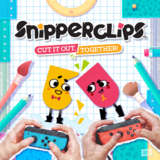 Snipperclips - Cut it out, together!
Follow
$0.00 on Amazon
Buy

Randolph made his seven-year-old son stop playing Breath of the Wild on the Switch for a few hours to play coop with him while reviewing Snipperclips. His wife also played (under duress, as she's not much of a gamer). But everybody loved it! Nintendo provided GameSpot with a copy of the game.