Poor AI and insane difficulty gets between you and the sniping in Sniper: Ghost Warrior.

Snipers are some of the deadliest and most frustrating soldiers to deal with in shooters, so it's very appealing to be the one behind the scope in Sniper: Ghost Warrior. The trouble is that a lot of design miscues by developer City Interactive make it almost as aggravating to play a sniper here as it is to try to avoid the insta-kill headshots that snipers deal out as bad guys in other first-person shooters. Maddening difficulty, irritating enemy AI that hides its stupidity by being prescient, and terrible stealth mechanics make the game as annoying as a mosquito in your bedroom. Only good shooting mechanics, sharp jungle visuals, cool slow-mo camera effects that let you get up close and personal with bloody headshots, and somewhat promising multiplayer save the game from being a total disaster.

The story behind the Sniper: Ghost Warrior campaign deals with some kind of revolt in a banana republic. Details are sparse, with you being filled in on a need-to-know basis through brief orders from HQ during missions, but it seems like the bad guys have taken over this tropical paradise and the Yanks are on the way to restore order. Faster than you can say "Hey, that's just like what Reagan did with Grenada!" you've got your boots on the ground as a Ghost Warrior, an elite covert operative with a sniper rifle and a plan. Well, you've got to assume there's a plan behind all of it. You're never given the whole picture aside from random tidbits about drugs and a nuclear program, although you are handed out clear orders in the levels and sent off to kill various baddies, rescue captives, mark targets, secure data, and clear out bases. Objectives are also marked out with onscreen dots and a gauge that tracks distance from goals, so you can never get lost even in the densest jungle foliage.

Individual mission objectives are quite varied. While the majority of the game focuses on traditional sniper duties, like shooting sentries in the head via your telescopic sights, some levels mix in stealth and others deal with straight-out shooter carnage that is all about going to town with the budda-budda-budda stuff. At times, you bounce around to different parts of battlefields, seeing how fights play out from different angles. One moment, you're on a tower taking out enemy snipers to protect an incoming assault team. The next, you're part of that assault team, shooting up all and sundry. Levels feature lush jungles, ancient ruins, sandy beaches, and tin shacks, making your sniping exploits look a bit like clips from somebody's slides during an off-the-beaten-path vacation in Cuba. That's not to say that Sniper: Ghost Warrior is bleeding edge or anything, as there are some real rough edges, like extremely blocky shadows. Still, the game looks more than respectable, even featuring a slow-mo bullet cam whenever you make a headshot or kill two enemies with one pull of the trigger. An array of jungle noises and Spanish enemy chatter further build a Caribbean atmosphere, and really come to life in the living room if you've got a good 5.1 surround system, although the audio is marred by chintzy weapon sounds.

While the different styles of gameplay and scenic locales keep things fresh, nothing is pulled off particularly well. Regular sniper duties are the most enjoyable part of the game because they're straightforward and offer that peculiar shooter satisfaction that comes from turning an enemy's head into a red geyser from a mile away. You have to deal with wind, heart rate, breathing, and gravity as well, which adds a hint of realism to the action. Aiming is actually much easier in the Xbox 360 version of the game than it is in its PC counterpart. Although the sight jerks all over the place in tune with your breathing on the PC, here, the movements are more measured. You seem more like a real sniper and can make perfect headshots much of the time without breaking a sweat. Sneaking around remains annoying, however. The game tracks how hidden you are from prying eyes with a meter that clears when you're skulking through the jungle and climbs into the red when you're spotted by an enemy. It's a solid idea but poorly implemented. Cover isn't tracked well either. Sometimes you're spotted when you're buried in jungle; sometimes you're invisible behind a couple of weeds or a thin tree that even Paris Hilton couldn't hide behind. Even worse, you're often totally blind in the midst of a bunch of big green leaves while enemies can see you perfectly and fill you full of holes.

And then there are moments when Sniper: Ghost Warrior descends into utter stupidity. Much of the game is plagued by terrible enemy AI, which is most notable in the shoot-'em-up sections. Sentries freeze in place, get stuck running into walls and rocks, and sometimes pause for a good three Mississippis before shooting even when they have you dead to rights. But when they're smart, they're too smart. If one enemy is alerted, everybody often knows exactly where you are instantly. Allied AI is also bad, with squadmates that are absolutely worthless. They do little but stand out in the open firing shots that never seem to hit anything. Difficulty is all over the place. In numerous levels, you run into brick walls thanks to insanely hard sequences where you have to kill a bunch of targets in no more than a handful of seconds (at one point while on a raft bouncing around in choppy water) or one target with a perfect shot instantly. One level even ends with a ridiculous section where you have to run for a chopper while invisible enemies take shots at you; then, when you get through this deadly gauntlet, about a dozen enemies appear out of the brush out of nowhere to mow you down.

Many of these flaws are somewhat mitigated in multiplayer, where you don't have to deal with the AI issues or the crazy difficulty. The game's Deathmatch, Team Deathmatch, and VIP (one player is designated the VIP, which makes him a more valuable target) modes don't offer anything earth-shatteringly different from other shooters, but intricate maps with countless hidey holes and shadowy spots make matches intense, and the connections run fast and lag-free. You have to be aware of your surroundings because enemies are tough to see unless you've gained a good sniping position looking over the map. Even these locations don't allow for much camping because they're watched by experienced players and regularly cleared out with grenades. With that said, gameplay is an acquired taste and the learning curve is high. Until you learn the maps, you spend a lot of time getting gunned down by enemies you never even see. This seems to be scaring off some Live players, as there aren't too many people on the servers and it can take a while before team matches fill up. It's too bad there is no cooperative option here because being able to play sniper-and-spotter with a buddy through a campaign against AI enemies would seem to be the best multiplayer feature that a game like this could offer.

While Sniper: Ghost Warrior has a few pluses, they're hard to spot buried under the many design flaws that make the game one frustrating rumble in the jungle. It's awfully gratifying to line up a perfect kill and be rewarded with a bullet-time slow-mo sequence that shows what happened to the bad guy's head after you squeezed the trigger. But annoyances like the punitive stealth sequences, and insane difficulty spikes make the satisfying moments few and far between. 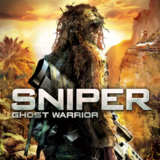 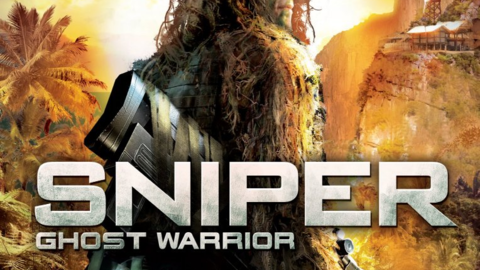 Sniper: Ghost Warrior puts players into the suit of a sniper as they attempt to accomplish a wide array of sniping and assault missions.