Sniper: Ghost Warrior 2 is a superior shooter when compared to its predecessor. Granted, that isn't saying much. Said predecessor suffered from terrible artificial intelligence, absurd bullet physics, and an overall level of difficulty on par with solving a Rubik's Cube while navigating white-water rapids blindfolded. This time around, however, developer City Interactive has addressed virtually all of the sore points that made the earlier game miss as often as it hit. This is an accomplished stealthy shooter, with smarter enemy AI, more-realistic sniper physics, and scaled-down difficulty that provide a challenging, not maddening, sniping experience. Only miscues like the spread-out save checkpoints and throwaway multiplayer keep it from achieving greatness.

Most of your time with Sniper: Ghost Warrior 2 will be spent with the three-part campaign. You play as Cole, a special-ops sniper helping out assault teams in hot zones ranging from the Philippines to Sarajevo to Nepal. You come to care for Cole and his buddies through this seven- to eight-hour saga of betrayal and revenge that begins today, bounces back to 1993 for a look at the civil war that ravaged the former Yugoslavia, and then jumps to the present to wrap everything up along the border between Nepal and India.

A well-written, well-acted script give the game a great action-movie vibe, as do authentic-looking visuals and animations powered by the CryEngine 3. Excellent sound effects do a wonderful job of pulling you in. Weapon noises, the shouts of enemy voices, the far-off rattle of weapon fire in war-torn Sarajevo, and various atmospheric sounds like the background hum of the Philippine jungle are all handled extremely well and enhance the tension as you line up each careful shot.

The presentation isn't the only thing that excels in Sniper: Ghost Warrior 2. Almost every aspect of the first game has been refined for this sequel. Enemy AI is much more cunning now. Where bad guys tended to run around mindlessly and freeze in place before, now they smartly respond to fire by taking cover. Foes react like real soldiers. First they hunker down so they don't get their heads blown off. Then they peek out to look for who is shooting at them. And then they return fire appropriately or rush your position, which makes firefights feel natural rather than staged.

If you've got a good spot on high ground against a small number of enemies, the baddies generally grab cover and snipe back. But if you're in a more vulnerable position, or are taking on a large number of foes, you can expect to be rushed and shot down like a dog. Either way, you need to be patient. Enemies sit back and wait you out at times. If you get antsy and leave cover, they generally make you pay for it.

Shooting is also much more enjoyable, whether you're using a mouse-and-keyboard setup or a gamepad. In the earlier game, bullet drops were extreme, slight winds significantly affected shots, and your heart rate caused the scope to carom all over the place. Here, the physics here are just right. As a result, it's easier to gauge shots on your own without relying on the little red dot showing shot location that's offered in the lower two difficulty settings. Now you can play on the advanced setting and feel as though you are lining up shots like a real sniping pro. Before, shooting without the interface aid felt like guesswork.

Gamepad controls deserve a mention for being easy to use, too. Playing on the consoles is a little more challenging than on the PC, due to the superior accuracy of a mouse. But it isn't that much more difficult, because you have fine control over scope movement even with the right stick. It's only a little annoying when shooting right after running, since your speedy heart rate bounces the scope around so much that it seems like you're atop a mechanical bull.

Gameplay is now more focused on stealth than shooting. All of the pure action episodes of the last game have been ditched for a more intense sniping approach where you stay hidden as much as possible, only popping out for quick headshots and silent knife kills. Thankfully, stealth is rewardingly fleshed out, with more lifelike creeping through the shadows. It's clear when you're hidden and when you're visible now, unlike in the earlier game where it was just about impossible to figure out what was good cover and what left you exposed to enemy sentries. Successfully sneaking around cordons of guards is possible now, where before you wanted to give up right away and just try to kill everyone. The level design helps as well, with more options for cover. Ducking behind stone walls and crawling under trucks and trains are much better options than hiding in the last game's jungle foliage.

That said, there are some shortcomings. The biggest is the checkpoint system, which saves your progress too infrequently. The game generally saves only after you clear big sections of a level, like a building. You often sneak past a dozen sentries, silent kill a few more, and crawl on your belly for a few minutes without reaching a save checkpoint. The joys of stealth are also occasionally dampened by level linearity. Sneaking through levels can be accomplished only by sticking to a set course of action, like crawling under a line of trucks; in one case, you can even sprint past enemies to reach your mission goal. Luckily, getting spotted doesn't result in instant failure; you always have a chance at shooting your way out of mistakes, which gives the campaign a pleasant amount of freedom.

Bear in mind that some locales have been designed like puzzles so intricately plotted out that you can't beat them without learning how they play. You occasionally need to play through particularly tricky parts of levels once or twice before learning enemy patrol patterns, for instance. Such puzzle levels are satisfying to figure out, but can also make the scant checkpoints additionally frustrating. Fortunately, Sniper: Ghost Warrior 2 is never so hard at the standard difficulty setting that you have to endure a replay more than two or three times.

It's a good thing that the campaign provides you with so much tense action, along with a shooting range where you can sharpen your skills by killing all comers. This feature can be useful, especially if you want to take on the advanced difficulty setting with all of its sniper-simulation attributes. Sadly, multiplayer is an afterthought. All you get is team deathmatch and a pair of maps. Support is provided for up to 12 players on the fairly small maps, leading to some intense firefights, but there are far better options on the market if you're looking for a competitive fix.

Sniper: Ghost Warrior 2's story and stealth make for a satisfying and entertaining single-player campaign. The frustratingly few-and-far-between checkpoints and MIA multiplayer are disappointments, but this is a worthy sniping experience, especially given the game's budget price. This thoughtfully designed sequel makes good on the promise of its highly flawed predecessor. 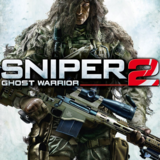