It's not for those with short attention spans, but patient players who aren't squeamish should enjoy Sniper Elite's tense and methodically paced action.

Last year Vietnam gave World War II a run for its money as the most prevalent war in video games. With recent games like Call of Duty II and (another) Brothers in Arms, game publishers seem bent on letting us know that World War II is the only war worth fighting... Well, that and Vietnam. Not to be left out, Namco has stepped up to bring us Sniper Elite, a third-person shooter set during the greatest war the world has ever known. To its credit, Sniper Elite takes a different approach to the concept of storming beaches and mowing down Nazis. As the title implies, this is a game about being a sniper, and it requires a more methodical approach than simply popping a hot one in anyone wearing the wrong color of uniform. That said, Sniper Elite does require a lot of patience, but dedicated marksmen will get a lot of satisfaction from the lengthy and challenging campaign.

Sniper Elite takes place in 1945, at the close of the war. The game focuses on the conflict between Russia and Germany for control of Berlin. The Russian secret service, known as NKVD, is in town to steal the atomic bomb technology from the German Army. You have to put a stop to that posthaste, because nuclear weapon technology in the hands of Stalin's forces would surely spell big trouble for just about the entire world. You are an American sniper, trained by the OSS to be the best of the best when it comes to covert operations. Disguised as a German soldier, you have to stop the NKVD at all costs.

The single-player campaign is quite lengthy. There are 28 missions in a variety of different (but very similar) war-torn settings. The missions are pretty much what you'd expect from a sniper game. You'll have to assassinate high-ranking officials, steal secret documents, rescue captured allies, and shoot hundreds of guys in the head. The campaign can easily take 12 hours or more to finish. If you complete all the optional objectives and take the time to set up all your shots rather than just blast away recklessly, this game will easily take up as much time as you're willing to give it. Therein lies the conundrum with this game. If you play it carefully, a single level can take well more than an hour to complete. The stealth is well done here, and the game does a great job of building up the sense of tension that comes from sneaking around and picking off enemies. After awhile, though, that tension fades into tedium and you'll eventually just be wishing you could move on already.

The missions aren't particularly satisfying, either. Some of the more complex missions are great, like when you have to climb your way up a cathedral tower and then snipe enemy soldiers as they rush your ally, who's stuck waiting for transport. The problem is that most of the missions are rather anticlimactic. You'll spend a long time fighting through as many as six or seven fairly simple but time-consuming objectives, only to have the final objective be something as simple and unexciting as walking to the ex-filtration point, unchallenged, so you can exit the level.

Another problem with the missions is that they require a lot of trial and error to really figure out what you're supposed to do. You'll die several times while trying to figure out what the best position is to complete your objectives, or trying to figure out where enemies will be coming from. This means you'll replay the same mission several times, even on the easiest difficulty. This is especially frustrating when you go through 20 minutes or more of buildup, only to have the guy you were supposed to assassinate get spooked and run away. Then you have to go through that 20-minute buildup all over again. Luckily, you can save anywhere you want and at anytime, though you do have a limited number of saves per mission. You'll want to remember to save often so you don't have to keep going over your same tracks every time you die.

You'll die a lot, too, because as a sniper you aren't equipped to take much damage. A few rounds from a machine gun at close range are more than enough to put you down. You can find bandages and medikits on the ground and by searching corpses, but healing items are few and far between. The enemy artificial intelligence here is deviously intelligent as well. In fact, the AI is almost too intelligent sometimes, as they have an uncanny sense of where you are at all times, even when you've gone to great lengths to remain concealed. The enemies in the game don't often just stand there and wait for you to pop them in the head. Enemies here run for cover, crouch, lay down, and they'll even work together to pull some dirty tricks. For instance, a group of enemies might be keeping you occupied while another enemy sneaks around behind you and unloads a clip in your back before you can even turn around to see what's happening. If you shoot an enemy in the leg, he'll fall to the ground and squirm around while shouting for help. If you don't finish him off right away, another enemy will pick up his fallen comrade and carry him to safety. The game does a great job of making the enemies seem crafty and intelligent. A good deal of the challenge here is derived from the fact that it's usually far more effective to outfox your enemies than it is to outgun them.

The shooting is handled fairly well, as long as you're using the sniper rifle. The shooting is challenging, but it's also pretty forgiving on the default settings. By default, the only variable that affects the trajectory of your bullets is gravity, so on the longer shots you have to aim slightly above your target. You can turn on other variables--like wind--if you want to. When setting up your shot your gun will sway slightly due to your breathing and heartbeat. You can hit a button to empty your lungs, which will steady your hand for several seconds. Once you have an enemy in sight you can take him down with a single well-placed shot to the head, or a couple of quick shots to the body. If you score a long-distance headshot or other instant-kill shot, the camera will dramatically follow the bullet as it leaves your gun, flies through the air, and takes off a chunk of your enemy. Headshots are especially gruesome with this effect, as you'll see chunks of brain and skull fragments burst out of a guy's head. The bodies don't actually deform, so you can't blow a guy's head clean off, but the close-up slow-motion effect is still more than enough to make even veteran snipers cringe. That isn't to say the headshots aren't satisfying, because they are; however, they're definitely not for those with weak stomachs.

The hit detection does seem to be a bit too simplified at times. You can kill a guy with two shots to the thigh just as fast as you can with two shots to the chest. Aside from the aforementioned headshots, it doesn't seem like it really matters where you hit an enemy. You can kill a guy by shooting him in the pinky, or even by simply grazing his backpack.

The levels in Sniper Elite are fairly well designed, but by the end of the game you'll have seen the same plywood barricade, burned-out truck, and crumbling building dozens of times. There are a couple of standout levels, but for the most part you'll be slinking around the rubble in the deserted city streets. There are plenty of places to hide and pick people off, but most of the shooting here takes place on level ground. There are a few sequences where you'll be sniping from an elevated position, but mostly you'll just be lying prone under a truck or crouching behind a barricade. There are also some parts of the level design that are just a bit too convenient to be believable. There are tons of plywood barricades with conveniently placed holes right at your line of vision. You'll also have to take out fuel trucks or tanks, which luckily can be taken out with a single shot to an external fuel cap. The fuel cap is left unprotected, and it's even a different color than the rest of the vehicle to make it especially easy to destroy.

If single-player isn't your thing, you can take this game online to play deathmatch with up to eight players. You can also post your marksman scores online to see how you stack up against other players. The online deathmatches can be fun, but it's definitely a much slower pace than your average game of Halo 2 or SOCOM 3. Again, if you're patient then you'll enjoy it; but otherwise you'll probably get bored fairly quickly. If you're playing offline, you can tackle the single-player campaign with a friend in split-screen co-op.

The graphics in Sniper Elite look about average. You'll see the same few textures over and over again, like the smear of grays and browns used to indicate rubble. Most of the textures look blurry and ugly, and it doesn't help that you'll often be seeing them up close, since you'll be looking through the scope of your sniper rifle. You'll also see the same couple of character models throughout the game. Some will have hats, and others won't, but they're all the same couple of guys. Also, you really have to search for your targets, since there are so many layers of obstacles for enemies to hide behind. The game will play tricks on you by putting moving objects in your way, like newspapers blowing in the wind or machinery in factories. Since your eye will be so trained to pick out the slightest movement, you'll often find yourself thinking you have a target, only to find out that it's just a part of the environment. Between the Xbox and PlayStation 2 versions of Sniper Elite, the Xbox version is ever so slightly better looking as a whole, but the differences are only barely palpable.

The sound in the game is exceptional, and it really gives you the feeling that you're in the middle of a war. You'll hear planes, bombs, and artillery rounds in the distance, and you'll also hear enemy soldiers shouting at one another. Unfortunately, enemy soldiers only have a few lines that get repeated over and over again, which gets annoying after awhile. You really can't play this game without sound, though. You'll come to rely on sounds of footsteps or gunfire to tell you exactly where enemies are. Fortunately, the sound feels like it's a part of the game, rather than just a tacked-on effect.

Overall, Sniper Elite is enjoyable if you have the time and patience to really get the most out of it. If you have an itchy trigger finger and love gratuitous explosions and heavy weaponry, you'll probably want to pass on this game. However, if you like stealth games and have plenty of time to spare, then you'll find a lot to like in Sniper Elite. 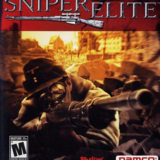 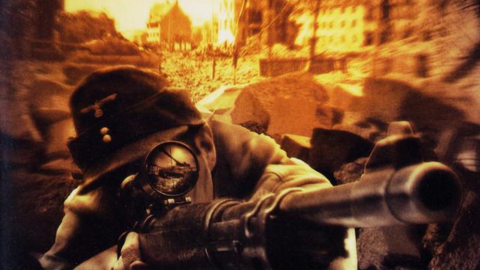 Sniper Elite sets you in the midst of the end of World War II. As an OSS-trained sniper you must disguise yourself as a German soldier and stop the Russians from stealing nuclear secrets from Berlin.