The game's cutesy hook might be enough for the young ones, but anyone with a modicum of gaming experience will probably find Sneakers to be boring and tedious.

While Microsoft has clearly been gunning for a slightly older demographic since the release of the Xbox, this doesn't mean MS doesn't have room in its game plan for the kids. Originally released as Nezmix in Japan, Sneakers is a simple puzzle game featuring lots of cute, furry mice, and the fact that the game is targeted at the Sesame Street demographic is apparent in its breezy, almost saccharine-sweet presentation. The game's cutesy hook might be enough for the young ones, but anyone with a modicum of gaming experience will probably find Sneakers to be boring and tedious.

Sneakers quickly starts with a group of mice living in a human-sized house discovering that all their cheese has been stolen. Their prime suspects are the dozens of sharp-fanged, red-eyed rats that have been spotted around the house, and so the four mice gang up to search for the rats and chase them out of the house, which is more or less where you come in.

The gameplay is broken down into two distinct portions. Through most of the game, Sneakers plays like a lopsided game of hide and seek. You'll lead your group of mice around the house, looking for rats. When you spot one, you'll press the X button to bring up a targeting reticle and then press A once you have the rat in your sights. Now that the rat's been spotted, he'll disappear into a puff of stars, and you'll move on. Occasionally a rat will be hiding inside a basket or under a lamp shade, requiring you to perform some basic puzzle solving to flush them out, but for the most part, the rats can be found in plain sight. Adding to the game's simplicity is the limited amount of control you have over the mice. You'll directly control which direction the main mouse moves, and the other mice will follow accordingly, but you can only move the main mouse left and right along a predetermined path. You'll find crossroads throughout the game, at which point you can choose a different direction, but that's the extent of your control.

The second part of the gameplay will occasionally pit your group of mice against a group of rats and have the two factions duke it out. The fighting system features a total of six different moves, including a couple of punches and a defensive maneuver. The fighting portion of the game, while not particularly difficult, can be a frustrating endeavor due to the haphazard timing of throwing punches. Neither component of the gameplay is especially challenging or compelling, and though the game can be beaten in two hours or less, it's doubtful most players will want to slog through it to see the end.

The rodents in Sneakers all sport the fur-shading technique we first saw in Rare's Star Fox Adventures, though it was executed to much more impressive effect in that title. The fur shading here looks cheap and inconsistent, and it draws attention to simplicity of the character models. The animation of the mice is limited to a walking/shuffling animation, a running animation, and a climbing animation, each of which appears to be made up of three or maybe four frames. The environments are modeled with a lean number of polygons, though the game does sport some occasionally sharp, realistic-looking textures. The sound design mirrors the game's sunny attitude with a couple of cheery tunes that play at full blast for the entirety of the game. These songs, which occasionally sound suspiciously like music from older Super Mario Bros. games, become seriously grating more quickly than you might suspect.

If the fact that Sneakers is being distributed in the US exclusively by Toys "R" Us tells us anything, it's that even Microsoft, the publisher of Sneakers, has little faith in this title reaching anyone outside the 9-and-under crowd. As a digital game of hide and seek, Sneakers might be a suitable diversion for the post-toddler age group, but anyone more discerning will quickly tire of the game's half-hearted presentation and repetitive, simplistic gameplay. 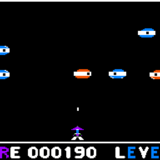 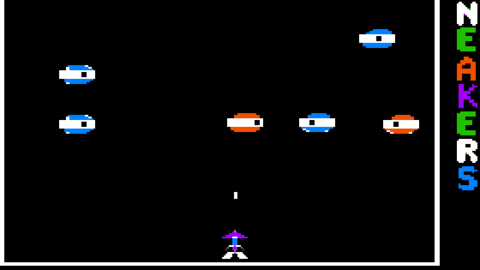 The game's cutesy hook might be enough for the young ones, but anyone with a modicum of gaming experience will probably find Sneakers to be boring and tedious.