Sneak King isn't a good game, but it's so crazy and so cheap that it still manages to be weirdly compelling.

Have you ever been playing Splinter Cell or some other stealth game and wished that instead of snapping someone's fool neck after sneaking up behind him, you could give him a hot meal? OK, probably not, but hey, that's Sneak King. This game is one of three Xbox 360 games that have been made available by the popular quick-service chain, Burger King, as part of a temporary offer. While this ingrained level of product placement might sound immediately disgusting to some, at least they're being totally up front about it. Going in, you know that this is one big ad for hamburgers...and various breakfast foods. It's a dumb game, but it's also $4 (provided you also purchase some food) and seems like the sort of thing that will be a collectable down the road.

Sneak King comes from Blitz Games, the developer of Fuzion Frenzy on the Xbox, and it puts you in the role of the Burger King himself, from the tights to the creepy, smiling mask. The graphics are very simple, and that probably has a lot to do with the game's dual compatibility. The disc will run in either a 360 or an Xbox, but regardless of which system you put the disc in, you still get a barebones-looking world with limited animation at best. It's a $4 game, which makes you want to say "you get what you pay for." But if you consider there are some Xbox Live Arcade games that are better in every way and available for a dollar more, this game's especially filthy.

To make a creepy character even creepier, you're practically playing a stalker in Sneak King. There are different missions and different locations to visit, but the goal remains the same: finding hungry people in desperate need of a "Whoppertunity," sneaking up on them, and surprising them with a fancy little dance and the presentation of Whoppers, hash browns, coffee, or some other Burger King menu item. There are also hiding spots around each one of the levels; if you jump out of a hiding spot and immediately present someone with food, you'll get bonus points. Plus, a rapidly rising meter appears whenever you attempt to present food. Each notch on the meter is a higher level of flourish. Stopping the golf-style meter on the level three flourish is the grandest of them all, resulting in much dancing and shuffling, and, of course, more points. Your enemy in Sneak King is the clock and the evil vision cones of the people in each level. You want to be fast, but you need to be quiet. And you need to stay out of sight, or else your bonus multiplier will be reset. This risk versus reward, "hide in a hurry" gameplay is extremely fun and rewarding; thus, Sneak King is one of the greatest games ever made.

OK, we're lying. Sneak King is a one-trick pony that is an interesting curiosity with a subversive sense of humor. But unless you're some sort of achievement points junkie who's bent on getting the highest ranks on each mission to get all 200 of the game's points, you'll probably drop in long enough to see its one trick, earn a few achievement points, howl with a mixture of laughter and horror at its funny full-motion video intro screen, and immediately file it away in your library under "weird crap that will be funny to play in about 10 years or so." 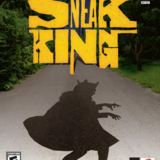