There are inevitably going to be a dozen or so average platformers in your Game Boy collection, one of them might as well be this.

Unless you were a child of the '80s, you wouldn't know what Smurfs are. Then again you also wouldn't know what Day-Glo sweatbands and Sony Walkmans the size of house bricks are, which isn't so bad. Smurfs were a community of small, blue creatures who worked, lived, and played in Smurf Village. When they weren't having wacky adventures and saying "Smurf" every five seconds, the evil Gargamel was coming up with nasty plans to capture the lot of them and make himself some Smurf stew. To make matters worse, there was only one female Smurf out of the whole clan. No wonder Grumpy Smurf was always so angry.

Anyhow, here we have another licensed platform game. Isn't it good to see the extra power of the Game Boy Color being used for new and inventive game ideas? That's sarcasm, by the way. The story goes that Gargamel has put a spell over the inhabitants of the Smurf Village, plunging them all into a strange nightmare world (hence the title). Thanks to your insomnia (apparently) you escaped this curse and are now charged with the task of rescuing all your little blue friends. Thus starts your interdream pilgrimage through several variously themed platform stages, each with a specific objective - usually finding some random object that some random dreamlike creature asks for. Yep, even the gameplay is dripping with '80s nostalgia values.

As Smurf's Nightmare is designed as a Color-only title, the graphics sport some considerable flair. Besides the obvious chromatic additions, the sprites are impressively large and, in most cases, well animated. The Smurf you control does the run /jump /idle thing pretty well, and other creatures (some of which are very odd indeed) bounce around with suitable aplomb. Some of the backgrounds are superb - not only do they go on for an age, but are rich in color and make good use of parallax scrolling. It's definitely one of the best ways to show off the GBC.

As platformers go, this is pretty dry. Most levels are nothing more than exercises in moving from the left side of the level to the right and jumping on enemy creatures' heads without dying. Bonus sections between levels (some of which, like the horse-riding section, look absolutely amazing) earn you bonus points, but really, the supposed action gets pretty samey after a while. This can't be too bad a thing when you consider the intended audience (children who, ironically, are too young to remember the cartoon show) but it's still a letdown for a full-price game. Oh, and the next platformer we see that makes you restart at the beginning of the level once you die will get instantly thrown into the trash. It's a completely lazy way to make the game harder than it needs to be, and there's no need for it in this day and age.

So what's the Smurfing verdict, then? If it weren't for the graphics, Smurf's Nightmare would be just another average Game Boy platformer. Considering that no matter how discerning you are, there are inevitably going to be a dozen or so average platformers in your Game Boy collection, one of them might as well be this. Just don't pass up Super Mario Bros DX for this, whatever you do. 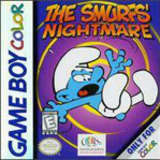