Smuggler's Run 2: Hostile Territory will instantly endear itself to fans of the original, as it is essentially a better-looking and more fun version of the original.

Where the first Smuggler's Run was little more than a collection of random missions, the sequel attempts to link the missions together with a plot in the form of full-motion video cutscenes that occur every couple of missions. These purposely cheesy FMV sequences are good for a laugh and provide some motivation for your character, though your motivation should be apparent from the beginning. You play courier to a rogue's gallery of criminals and warlords, which need certain sensitive goods moved across restricted borders. Your objective is simple--pick up a package and move it across the border while keeping law enforcement and rival interests at bay. While the core mechanics have remained unchanged, Angel Studios has made a few refinements to the formula, making the game more challenging and adding more variety to the missions. With the addition of the squirrelly but fast ATV, the super-heavy-duty Grenadier, and the tank-treaded Kavostov, the number of playable vehicles has been increased to eight. As you might imagine, each vehicle has different speed, acceleration, handling, and weight statistics, and while a certain vehicle may be the most appropriate for a specific mission, the vehicle options accommodate a variety of play styles.

One of the more frustrating aspects of the original Smuggler's Run was the game's hardheaded, pack-oriented AI. The enemy AI is just as doggedly persistent in Smuggler's Run 2, but a few key tweaks make the experience a bit more fun. Instead of just packing up on you and boxing you into a corner, the AI will make more tactical moves, like stationing a vehicle at a drop point or using a faster vehicle to run ahead of you and cut you off. The military vehicles are also no longer the unstoppable juggernauts they once were and are more susceptible to damage. If you ram an enemy directly into the side of a building, its vehicle will likely explode on impact.

The crowning achievement in Smuggler's Run's graphics lay in its massively sprawling environments. This was often achieved at the expense of the vehicle design and the landscape detail, both of which were simple and repetitive. Smuggler's Run 2 manages to maintain the huge maps while making vast improvements in these other areas. The barren terrain of the Mexican desert and the Canadian tundra found in the first game have been replaced with the brushy mountains of Chechnya and the thick jungles of Vietnam, which prove to be far more interesting backgrounds for your illegal activities. Environmental textures are clearer and more varied, and the addition of low-lying vegetation, such as fields of tall grass, clumps of bushes, and rice paddies, lend a greater level of realism to the world than the previous game's sterile turf. The vehicles are more detailed and no longer look like simple frames with some pieces of sheet metal slapped over them, and the game is able to handle more vehicles onscreen at once. The game also experiments with night vision and rain effects, but these gimmicks have been laid on a bit too thick and tend to distract you from the game at hand more than immersing you in it. Aside from these minor missteps, Smuggler's Run 2 improves virtually every facet of the graphics, from the geometry of the landscape to the number of vehicles that populate it.

The first thing you'll notice about the sound production in Smuggler's Run 2 is the prominence of the soundtrack. The first game underplayed the sound greatly, generally keeping it limited to the revving of your engine, quips from your dispatcher, and the scream of police sirens. The flirty female dispatcher is gone, replaced by your gruff employer, but aside from this, the environmental sound is essentially unchanged. The big change is that all your smuggling activities are now accompanied by throbbing techno music. Rockstar Games, the publisher of Smuggler's Run 2, has always put great stock in the importance of interesting, well-produced game soundtracks, and while there are a number of toe-tapping tunes in this game, they don't always fit the mood. A lot of the soundtrack is composed of upbeat, dance-friendly tracks that lack aggression and don't give off the same mean, dark feel that saturates the rest of the game.

Smuggler's Run 2: Hostile Territory will instantly endear itself to fans of the original, as it is essentially a better-looking and more fun version of the original. The fundamentals haven't changed enough to sway anyone unimpressed with the first game, but the consistent quality of this Angel Studios release should warrant a look from anyone in search of a driving game a little off the beaten path. 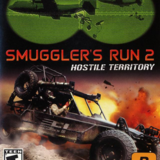