As with the other arcade classics currently available on Xbox Live Arcade, the addition of scoreboards, achievements, and online play breathe new life into Smash TV, an already-classic game.

It's a great time to be a fan of dual-joystick, Robotron-style action games. The release of the Xbox 360, with built-in support for downloadable games via Xbox Live Arcade, has opened up a world of opportunity for all sorts of games that might not fly in a $50 retail package but are great pickups for $5 or $10. And it just so happens that there are already three games on the service that deliver that Robotron-style action. The latest, Smash TV, is a sort of spiritual successor to Robotron: 2084, which Midway originally released in arcades back in 1990. Smash TV took the "left stick moves, right stick shoots" concept to the far-flung future of 1999, where game shows have become violent competitions where the winner gets fabulous prizes...and the loser dies. So, yeah, it's Robotron meets The Running Man, and with its Xbox Live support for cooperative play and scoreboards, it has probably never been better.

Smash TV is broken up into three levels, each of which is broken up into multiple rooms. Each room has a door on each wall, and enemies come spewing through these doors shortly after you enter each room. The basic enemy just runs at you with what appears to be a baseball bat, but you'll also encounter small tanks, wall-mounted turrets, crazy snake-men, and Mr. Shrapnel, a pudgy little guy who walks around the edges of the level, stopping eventually so that he can explode and send bits of debris flying in all directions. While no one regular enemy is too tough to beat, each level sends what feels like hundreds if not thousands of enemies at you, often at the same time, from all directions. This makes your ability to get out of the way pretty important, but being able to maintain a clear path to move around in is a pretty key skill as well. At the end of each level, you'll face a boss. The first level puts you up against Mutoid Man, a multistaged tough guy with tank treads for legs, who rolls around, firing eye lasers and various other weaponry at you. The enemy design is inventive and still pretty cool after all these years.

The game was originally designed to suck the quarters right out of your pocket. With its tough boss fights and ridiculous swarms of enemies, dying in Smash TV is easy to do. You're given infinite continues when playing alone, but when playing as a duo (which works just as well on one system as it does over Xbox Live), one player has to remain alive at all times--if both of you happen to run out of lives at the same time, you're done. Given those constraints, Smash TV isn't a punishingly difficult game, on its own. But when you work in the game's scoreboards and achievements, it becomes practically impossible. That's because the scoreboard divides your game score by the number of times you continued. Sure, you can just die your way through the entire game, but you'll never get a decent position on the scoreboard that way. Also, the game's Xbox 360 achievements include finishing the entire game without continuing, a feat that requires a ludicrous amount of focus and probably no small amount of luck. If you're already a Smash TV fan, the scoreboards and achievements should provide enough challenge to get you hooked all over again.

Smash TV's graphics and sound match those of the 1990 arcade original rather well. This means that the game's speech will sound a little muffled by today's standards and that the graphics are stylish but nondescript. But both aspects of the game retain their original charm, and that goes a long way, especially when it comes to the game-show host character, who pops up every few levels to lay a terrific catchphrase on you, like "I'd buy that for a dollar" or "Big money, big prizes... I love it!"

Unlike the other Midway arcade classics that have been released on Xbox Live Arcade, Smash TV doesn't contain any updated graphics mode, leaving you with only the arcade-accurate look. That accuracy is great, but it might have been cool to see how the game would look if it were lightly redrawn and touched up. The control is just as solid as it was in the arcades, provided you use the digital controls. You can use the analog sticks to play, if you like, but since this game originally used two eight-way joysticks, the D pad and the four face buttons give you better, more definite control of the action.

Smash TV is one of the greatest games of all time, and it's amazing to see it enhanced after all these years. The scoreboard, online cooperative play, and achievement targets breathe new life into this old classic, making it a more-than-fitting tribute to the arcade original. Plus, the five bucks you would spend on buying the game is probably less than what you would spend to finish it at an arcade. 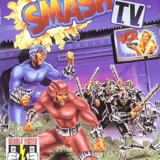 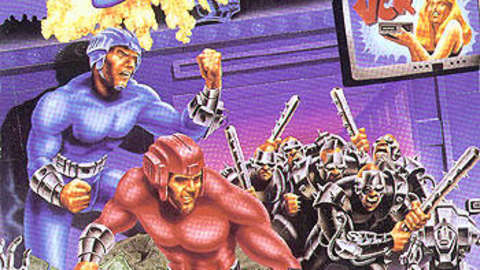