Thanks to Sega's Virtua Tennis series, the sport of tennis has entered the video game sports arena as an unlikely contender. While tennis doesn't enjoy the familiarity of football or baseball in America, arcade-style tennis games like Virtua Tennis and Namco's Smash Court Tennis give the sport greater accessibility with easy-to-learn but challenging gameplay. While Smash Court isn't quite as polished or deep as Virtua Tennis, there's still plenty of fun to be had with this game.

Probably the most impressive aspect of Smash Court Tennis is its roster. Players can choose from eight different real-life tennis pros, including some of the best players in the sport today. Representing the women are Martina Hingis, Lindsay Davenport, Monica Seles, and Anna Kournikova, and on the men's side are Pete Sampras, Yevgeny Kafelnikov, Andre Agassi, and Patrick Rafter. Smash Court doesn't have the Williams sisters, unfortunately, and it doesn't have as extensive a roster as Sega's tennis games, but the amount of attention paid to the players' personalities and abilities makes up for it. All the players are easily recognizable on the court, not just by their physical appearance, but also by the distinct way they move and the style in which they play.

Any sports game worth its weight features a wealth of gameplay modes, and Smash Court Tennis successfully rises to the occasion. There's the straightforward arcade mode, where you compete against a series of AI-controlled opponents. The pro tournament mode plays similarly to the arcade mode, with the addition of a point system that can be used to unlock little goodies and more gameplay options. The exhibition mode lets up to four players customize match type, length, and location to their liking. The time attack mode charges you with beating your opponents as quickly as you can, and the challenge mode puts you through a series of minigames designed to help hone your abilities.

Evidence of Smash Court's arcade heritage is seen in its simple control scheme, but it would be foolish to mistake this simplicity for a lack of difficulty, as the game can present a challenge for even the most seasoned Virtua Tennis pros. The circle, X, and triangle buttons are used for topspin, slice, and lob shots, respectively, and the direction of your shot is influenced by the direction you hold on the analog stick right before you hit the ball. The shot timing in Smash Court is noticeably less forgiving than that found in Virtua Tennis, and it requires more precision to execute a really strong shot.

When you're in the middle of a heated rally, it's hard to criticize the graphics in Smash Court. The courts look good, with small touches like the indentations left by the players' feet on the clay courts. The players move around the court with a certain fluidity, and they're all generally well constructed. Some of the game's graphical luster is lost during instant replays, where the players' rather flat-looking textures and the extremely flat-looking 2D crowd are most noticeable. The game also suffers from a pretty bad case of the jaggies, which is unfortunate, as the game generally looks quite sharp otherwise.

Sound is used sparingly in Smash Court Tennis, and in most modes the gameplay is accompanied solely by the grunts of the players and the thwack of the racquet. A win is underscored by the cheer of the crowd and what could only be described as a rockin' Namco arcade riff. Most of the music is reserved for instant replays, menu screens, and the challenge mode, and most of it is light and upbeat, like you'd expect an arcade game to sound. The sparse sound design generally works in the game's favor, lending an air of real-life intensity, even if some the sound effects seem a bit hollow.

With Tennis 2K2 for the PlayStation 2 still a long ways off, Smash Court is currently the only option for tennis-loving PlayStation 2 owners. Virtua Tennis fans who are hungry for something new and can overlook some of the game's shortcomings should have some fun with Smash Court, though the less forgiving gameplay makes the game less appealing to the average gamer. 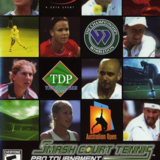