Racing these speedy little cars can be fun, but Smash Cars is disappointingly light on content.

Though remote control racecars can be fast, flashy, and fun, they are still stripped-down imitations of their larger counterparts. The same can be said about Smash Cars. In this downloadable game, you race a variety of RC cars through vibrant environments and perform acrobatic stunts to help you speed your way to victory. The core action is fun and conveys a good sense of speed, but it has its limits. The detailed tracks are set on one lone island, and there are only 12 single-player events. Completing these events takes only a few hours, though striving to earn all the gold medals takes significantly longer. Unfortunately, some awkward physics make it unpleasantly difficult to race at the high speeds required to medal in the later races. This deflates much of the replay value, and with no local multiplayer and a sparsely populated online multiplayer soon after launch, Smash Cars doesn't make a good case for its $14.99 price point. There's some speedy fun to be had here, but there should be more.

Despite its shortcomings, Smash Cars does deliver on presentation. The crisp, shiny car models look great as they zip along well-textured tracks. The courses are all laid out on one sunny Mediterranean island, and while there is some diversity, it would have been great to see how the attention to visual detail could have brought other environments to life. Many of the 12 races are only subtly different, and while racing counterclockwise on the course you just raced clockwise on provides a different challenge, it creates the feeling that there isn't much variety here.

Regardless of which way you're racing, every course is littered with things you can crash into, such as railings, poles, crates, people, trucks, cones, and other obstacles. Running into some items will stop you in your tracks, while smashing through others will help replenish your boost meter. Soda bottles give you a small boost, but don't slow you down; empty crates offer bigger boost bonuses, but they drain your momentum slightly. Deciding which items to barrel through adds an interesting dimension to the action, and zipping around these busy tracks is visually entertaining and technically challenging. Still, any collision can adversely affect your trajectory, and the higher your speed, the more serious the threat of derailment. It's perfectly reasonable to be penalized for crashing into or through something, but sometimes the collision physics are a little wonky and send you careening off in an unexpected direction. This is frustrating, but at least you know the cause of your misfortune. However, you will occasionally find yourself speeding around a turn or boosting down a straightaway when all of a sudden you are locked into a drift or sent flying through the air at a skewed angle with no idea how you ended up that way. These abrupt misfortunes are very aggravating and will make you feel that the car physics are screwed in too tight.

You'll also encounter some physics issues when you attempt crazy jumps, but these are generally more forgiving. By jumping off the end of a ramp, you can get a lot of air with which to flip, spin, and otherwise contort your car. You can rotate your car by twisting your controller or by holding a button and using the left analog stick. The latter option is preferable because the motion controls make it very difficult to land with any kind of precision. You don't have to land perfectly--not by a long shot--but you do have to generally keep your underside down. The analog stick makes this general precision much easier, and you'll be whipping out quadruple flips in no time. The more spins you manage, the more boost power you'll earn, and boosting is essential if you want to earn gold. Smash Cars is good, fast fun when you're racing in a car you're comfortable with, jostling opponents, zipping through shortcuts, pulling big stunts, pushing your boost to the limit, and snatching quick flips here and there to keep your boost meter stocked. Many of the races allow you to enjoy this fun, though the aforementioned physics oddities can quickly dampen your enjoyment.

Fortunately, in most races, you can recover from setbacks with skilled driving, so you probably won't feel like a victim to oversensitive physics until you are striving for gold in the tougher competitions. For the majority of the races, you'll be bumping tires with opponents that are driving one of three types of cars. There's the slow-yet-maneuverable Monster type; the midrange Buggy type; and the high-speed, hard-to-handle Sport type. You start with only the Monster type, and as you earn medals, you'll unlock the other two types, new bodies for each type, and new paint-customization options. Though there are 12 different cars in all, you'll likely stick to a speedy Buggy for most of the game. Monster trucks are too slow, and Sport cars go so ridiculously fast that only the most skilled players will be able to keep them on track. The Buggy has a good blend of weight and speed that makes it ideally suited for picking out the best line and speeding through the course. Yet, though you can paint your car all the colors of the rainbow, the limited variety of cars is a bit disappointing.

If limited car and track variety creates the sense that Smash Cars isn't very robust, the multiplayer offerings really drive it home. There is no local multiplayer, so if you're hoping to have friends over for some fun racing action, you are out of luck. You can race online with up to five other players and drive any of the courses from the single-player game. Connections are generally lag-free, but available games are few and far between. If you create your own, a few people will usually trickle in, but the game was realeased very recently and the online population is extremely low. Once you finish the race, each player is bumped back to the online multiplayer menu screen, so you have to create a new game and have competitors rejoin after every single race. Smash Cars could have greatly benefitted from robust multiplayer support, but the actual offerings are disappointingly bare.

There is fun to be had in Smash Cars. Racing around the rich environments and pulling a few flips while speeding your way to victory is satisfying and enjoyable. Unfortunately, Smash Cars doesn't give you enough opportunity to just enjoy it. Limited tracks, finicky physics, and poor car variety limit the appeal of single-player races. Racing against other people can be entertaining, but you'll have to depend on the desolate online community to show up and challenge you. With more fuel in the tank, Smash Cars could have been a success, but unfortunately, it just runs out of gas too soon. 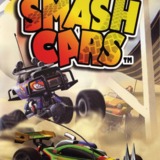