Small Arms is a four-player side-view combat game that puts a great deal of importance on collecting and using a bunch of heavy weaponry as often as possible. Or to put it in more common terms, Small Arms is Super Smash Bros. without the Nintendo characters and with a much heavier focus placed on weapons. The focus on weapons, which are constantly running out of ammo, makes the game feel quite different from Nintendo's Smash Bros. games. But it also means that you spend too much time hunting for new weapons and not enough time using them. The result is a neat, but flawed game.

The characters in the game cover a good deal of "cute little guy" territory, starting with the ever-scowling Marky Kat. There's also a ninja, a dinosaur, a robot, a chicken, an evil-looking mutant tree, and more. They're OK but don't really offer much personality, unless you count the sentence or two of descriptive text that each character gets for a background story. There are 12 characters to choose from, though four are locked when you first start playing. The difference among the characters is their starting weapon. Each weapon has two firing modes and can be aimed at any angle using the right analog stick. So Marky Kat's chaingun fires like a chaingun but also has a shotgun blast as an alternate fire. The crossbow can shoot exploding shots, the ice arm can shoot either machine gun-like shards or a freezing cloud, and so on. Though the weapons cover fairly standard territory, they're the most interesting part of Small Arms.

Unfortunately, you don't spend quite as much time shooting as you might like. The weapons all run on an energy meter that drains rapidly when you fire. So instead of focusing all your attention on the savage act of murdering your opponents, you also have to spend a lot of time looking around the level in search of batteries to recharge your current weapon or new weapons to grab. Because the melee attacks aren't very potent, remaining fully armed is really your only chance at survival. Your movement options include a double jump and a dash move that you can use for an extra vertical boost if needed. Some of the game's levels have tricky platforms that can be tough to reach if you aren't good at moving around. Additionally, a few of the levels feature forced scrolling. This gives you another thing to think about while immersed in a fight that's taking place on top of a fast-moving train.

The main mode has you go through a series of stages to fight against increasingly difficult foes, and you'll get a simple boss fight at the end. Challenge mode is a fighting game-style survival mode, where you have to face off against enemies over and over again until you finally fail. Shooting range lets you play a quick bonus game, where you have to shoot paper targets as they move by, but this one doesn't ever change and isn't much fun at all. As you might expect, the real action is in the battle mode, where you can play with up to four players either locally or over Xbox Live. Ranked games are limited to two minutes, but in player matches, you can configure more of the options for scoring and decide whether players can join in the middle of the match. You can also play any combination of local and Xbox Live players. So you can start a game with two other players locally, then invite a fourth from the Internet. That's pretty cool.

The setup for Small Arms and the options it gives make it sound like a great game, but unfortunately, the payoff isn't quite potent. The gameplay's focus on weapon hunting means that you have to be careful with your ammo, which isn't much fun at all and plays against the rest of the game's frantic action. The characters are small on the screen, which makes it easy to lose track of what's going on when two or three players get into a bunch. Also, when you're playing online, the camera sometimes focuses specifically on one of the other players and occasionally goes so far as to scroll you all the way off the screen. That's incredibly annoying.

Graphically, Small Arms has a good sense of futuristic-but-furry style to it, with some decent level designs to go with it. But the game is short on graphical effects and good weapon blasts, which brings it down a notch. The sound is also standard and devoid of personality. You don't get any voice clips from the characters. Instead, you get standard explosions and a decent soundtrack that is complete with a catchy, shuffling drumbeat to accompany the main menu.

The achievements in Small Arms are good, with many easy ones that you'll get for simply playing. But there are also plenty of tougher ones, like scoring five kills without losing a life. Small Arms also has a neat viral-style achievement that you get for playing online against someone who already has the achievement. The idea is that only members of the game's development team started out with this achievement, so it works its way through the Small Arms player base over time. But most people seem to already have it, making you wonder if it's not working properly or if there just aren't many people out there playing Small Arms. Either way, it's a zero-point achievement, which really neuters it.

When it doesn't strike out on its own in an interesting way or duplicate the game it's trying to clone more effectively, Small Arms has just enough Smash Bros. in it to disappoint you. While it does have some interesting online options, the gameplay doesn't hold up well enough to make it a worthwhile purchase for its midlevel $10 price tag. 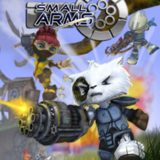 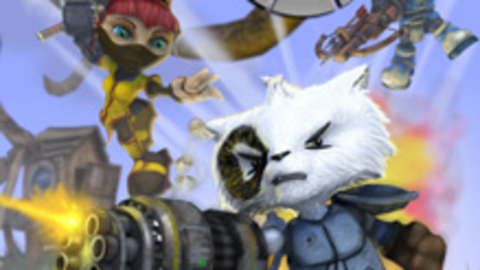 Jump around on platforms and fight off furry creatures in this four-player fighting game for Xbox Live Arcade.