Sly 3: Honor Among Thieves is bigger, longer, and Slyer than the previous two in the franchise.

Sly Cooper and the Thievius Raccoonus was released among a deluge of platformers for the PlayStation 2 in 2002, presumably vying for the title of the "Mario killer" for the budding system. The other two games, the Ratchet and Jak franchises, have gone on to change their focus in subsequent iterations, but Sly Cooper's unique presentation and charm has remained constant. Of course several things have changed for Sly in recent years--he's dropped the tricky-pronouncing manual from the title, incorporated a few more characters into the lineup, and now, in the third game, he's gone 3D...sort of. These small changes have either slightly accentuated or not affected the gameplay at all, and the resulting game is bigger, longer, and Slyer than the previous two in the franchise. Although Sly 3 still suffers from a relative ease that has always plagued the series, the gameplay is varied and clever enough to keep a player of any skill level's attention.

The events of the game begin right where Sly 2: Band of Thieves left off. Although it helps to be familiar with the previous two games in the series, you can still pick up Sly 3 and jump right into gameplay--just don't expect to get all the inside jokes. When last we saw Sly and the gang, things were somewhat shaky among the central three characters. The brain of the trio, the turtle Bentley, had suffered a crippling accident and was now confined to a wheelchair. The muscle, the hippo Murray, blamed himself for the incident and ran off to seek a more peaceful life of meditation. The game begins with the group fractured, and a new challenge facing Sly Cooper. At the onset, we learn that Sly's family, the notorious thieves named Cooper, had a vault where they kept all of their treasures. An evil genius named Dr. M is attempting to crack into the vault, and he has set up a fortress around it. Sly resolves that, in order to get his family fortune back, he must assemble a team of infiltration experts to get through the fortress and to the vault, which only Sly can open.

The game's levels occur in vastly different regions of the world, from the snowy mountains of China to the depths of pirate territory on the high seas. The point of each level is to aid and then recruit a new player for the Cooper family vault heist, like an anthropomorphic Ocean's Eleven, or something. Like Sly 2, the levels here consist of massive hubs, which not only facilitate getting between different objectives, but also often house the objectives themselves. This setup makes the game flow smoothly from objective to objective, and you'll find that every objective on the level contributes to your overall goal. Upon finishing an objective, you may return to the safe house, which serves two purposes. The first is to purchase gadgets and upgrades via the handy "Thiefnet" with the coins that you've been collecting around town, which can be found in barrels and from dead enemies. But the best way to get money quickly is to pickpocket guards who are still alive by sneaking up behind them and relieving them of their wallets.

Of course, you don't need to upgrade your attacks, especially if you prefer to focus on the stealth aspect of the game. However, from time to time, certain upgrades will be mandatory in order to progress through the main storyline, so it's best to collect money whenever you can. The other reason for the safe house is to switch between the three main characters. On all of the levels, the characters have different roles, so you'll need to use each of them and their unique abilities to complete the whole game. As you travel around the hub, you can press a button to bring up the location markers of the available missions. These markers rise above the building levels, so you can look up into the sky and head in the general direction of the next objective. The markers are also color coded depending on which character is needed to complete the objective, which makes the process of switching characters easier. This process might have been tedious otherwise.

The story is fairly linear, although you're given several objectives at the start and can do them in any order that you see fit. Upon arriving to a new country or level, Bentley outlines the plans in typical Sly Cooper fashion, via a slide show. The slide show previews the upcoming objectives, and they are narrated by Bentley's overly nerdy but adorable commentary. On each level, the team is working against a boss who is as flamboyant as he is nefarious. Although there are quite a few new faces in this game, fans of the franchise will be treated to some guest appearances, including reliving a previous sequence from Thievius Raccoonus inside the memory of one of the bosses. Sly humorously comments that he's done this all before and that the boss should really snap out of it.

The gameplay is more like Sly 2 in that it seems to be made entirely of minigames. These vary from an opera-singing contest, which plays like your standard rhythm game; a pirate-insult-joke face-off, Monkey Island-style; airplane dogfights; and countless others. Although some of the sequences repeat themselves, the game does an excellent job of keeping everything fresh by throwing in every minigame you could possibly conceive of, and more. In some respects, the gameplay switches too frequently to give you any sense of settling down and getting into the groove. On the other hand, the objectives are so well-tied-together and so involved in the detailed storyline that you'll likely be enthralled with the whole endeavor. You'll also recognize quite a few of the gameplay moments from games you've played before, but each one is so fleeting that it feels more like a tribute than a rip-off.

One of the game's greatest accomplishments is the sense of character that you get from the three leads, the new additions to the team, and the various enemies you encounter. Each personality influences the story and the way in which the character interacts with others. The downside to this is that there is a tremendous amount of exposition and dialogue, which can go on longer than the gameplay itself. If you're not moved by the characters and the scenario, you will likely tire of the cutscenes and voice-overs quickly. With rare exception, the voices are done very well, which is important considering how much you will rely on them in order to progress through the gameplay. This has its problems as well, because if you miss something being said, it might take longer than it should to figure out the next course of action that will progress the story. The sound plays a significant role throughout the game, as you will come to rely on the stealth noises to ascertain exactly how far away you are from the closest enemy and whether or not he has seen you.

The major change that was made to Sly 3 in order to differentiate it from the previous games was the introduction of 3D. With each retail copy of the game comes a pair of 3D glasses inside the manual, which you can cut out and use whenever the game calls for it. The 3D sequences in the standard playthrough are few and far between, and each time you encounter a 3D level, the glasses are vaguely incorporated into the story. For example, in one instance, you're heading into a dark cave and are told that you can use optical enhancers to see more clearly (even the characters inside the game can be seen wearing them). However, it's entirely optional, because before each sequence you're prompted with an option to play in 3D or not. Should you choose to use the 3D, you'll find there's not much to it, and it's really more of a hassle than an added bonus. Most of the 3D occurs when an object that you're walking past comes up in the foreground of the screen, and it seems to pop out toward you a little bit. This doesn't really help the gameplay much, and isn't even neat enough to be worth the hassle of the inevitable 3D-goggle headache.

Thankfully, this plays a much less significant role in the game than would be expected, and could (and should) be bypassed completely. You probably would benefit from checking out at least one level in 3D to realize for yourself that 3D in gaming still doesn't work any better than it did in Jim Power: Lost Dimension for the SNES. If you happen to enjoy the 3D experience, there's an option to go back and play through most levels in 3D after you've completed them, and they do look surprisingly better than the normal in-game levels, but the 3D feels much too gimmicky to be worth exploring as a serious gameplay element. Otherwise, the graphics are as good as they've always been. The original Sly Cooper was one of the first games to lead the cel-shading charge, and the series is still one of the best at it. We did notice the occasional drop in frame rate from time to time, but for the most part, the game is smooth and pretty.

Completing the game doesn't automatically register a 100 percent playthrough, and you'll find there's much more to go back through and play after you've done the single-player. On each level there is a sequence of "Master Thief Challenges" which demand different and more difficult tasks of you. There's also, for the first time in the series, two-player multiplayer, offering up four of the single-player minigames for head-to-head competitive play. In cops and robbers, you take on the roles of Sly and his lady-in-chasing, Carmelita Fox. The player in control of Sly must attempt to complete an objective, while Carmelita must try to kill Sly before he finishes this objective. Hackathon is a combat-esque duel inside the matrix, derived from the hacking minigame that Bentley frequently uses in the story mode of the game. Biplane duel and galleon duel are dogfights and ship fights, respectively. Although it's nice to see a change of pace from the traditional platformer fare, not one of these duels seems particularly compelling for the long term, since the most competition you'll get is from one other player. But it is nice to have a change of pace available regardless.

Sly 3: Honor Among Thieves continues the series' trend by providing more content and more players to work with. Although the 3D gimmick was a bust, the gameplay is good in spite of it, and you should enjoy the variety of scenarios in the game's many missions. The story mode is rich and entertaining, but at times excessive, so if you've not been a fan of it before, it might prove to be overwhelming in this iteration. Overall, the game's charm goes far beyond its presentation, making it one of the more interesting platformers to come out since Sly 2. If you like platform games, you can't go wrong by checking out Sly 3. 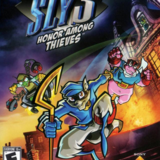 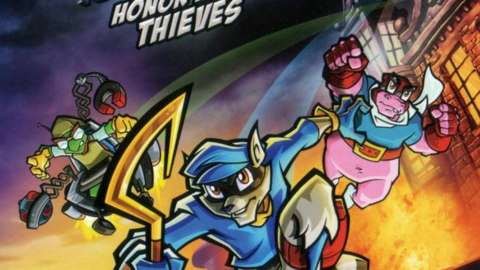 In Sly 3: Honor Among Thieves, you follow Sly Cooper and his partners in crime as they plunder locations around the world and fight adversaries, both old and new. Sly 3 is a cell-shaded platform game involving vehicles, gadgets, and an assortment of minigames.