The varied gameplay, well-constructed story, and excellent graphics, sound, and music all come together to form an experience that most anybody would enjoy.

2002's Sly Cooper and the Thievius Raccoonus was an interesting and fun combination of standard platformer-style gameplay with some light stealth aspects that helped set it apart from the pack. It looked great and played well, but the game was a little on the short and easy side of things, making it ultimately better suited for younger audiences. Now, Sly Cooper and his gang are back in Sly 2: Band of Thieves. The sequel delivers the same style of stealthy action found in the first game, but it wraps all the action up in a much more inventive and lengthier package. The result is a great game that's packed with all the charm of the original but is a lot better overall.

The last time we saw Sly Cooper, he was hot on the hunt for his family's thieving instruction manual, the Thievius Raccoonus, and the evil being that stole it, Clockwerk. The parts that make up Clockwerk's robotic-bird body are in Interpol's hands now, but at the outset of the game, Sly embarks on a mission to steal the parts to make sure they don't fall into the wrong hands. Unfortunately, he's too late. By the time he makes his way to the parts, they've already been stolen and scattered around the world by an international criminal network known as the Klaww Gang. So our sneaky raccoon, along with his faithful companions Bentley and Murray, must steal the parts back from the gang, fight with the gang's various thugs, and stay away from the law, which once again appears in the form of Inspector Carmelita Fox, who's been joined by another female known as Constable Neyla. It's a colorful, well-presented setup that seems like it could have come straight from a high-quality animated movie.

In Sly 2, you'll play as Sly, but you'll also get to control Bentley the turtle and Murray the hippo from time to time, since some objectives require their unique abilities. The differences between the three characters are pretty simple, but they're different enough to give each player a unique feel. Sly's the stealth guy, so he's the most agile of the three. Murray--hilariously decked out in a crazy wrestling costume--is your muscle, so his moves are focused on breaking stuff and beating people up. Bentley is the runt of the gang, but he's also smart enough to bring some gadgets along with him. His sleep darts can put guards under for a brief period of time, which is usually more than enough time to run up and use Bentley's other default gadget, a time bomb. You can also purchase new abilities and items for the characters, which can help make things easier, but you can usually get by without any additional help, because the game controls quite well. Each character has two attack moves at his disposal, including a stealth attack that you can only perform if you get behind an unsuspecting guard. In the event that you do get hit, though, you'll just take a little damage. Sly 2 is more forgiving than its predecessor that way, as the first game would put you down after getting hit once (or twice, if you had a special item).

The Clockwerk parts have been broken up and are being used by different Klaww Gang criminals for different purposes. This, in turn, effectively breaks up the game into episodes. Every episode takes place in a fairly large overworld-like hub (in which Sly can be seen stalking along rooftops late at night), but unlike in many platform games that contain hub environments, in Sly 2, some of your objectives will be completed directly in the hub. The objective of each episode is to pull off a grand heist. But you can't simply walk into each episode and then immediately pull off your heist. As with any great heist, there's a lot of setup that needs to take place here, and that's where the game's level structure comes in.

Most platformers just string together levels that don't really mean anything. As a result, you're just sort of platforming for the sake of platforming. Sly makes every objective count. Since you're only in town to pull off one job, everything you do relates to making that job possible. You'll typically start out by infiltrating an area and taking some reconnaissance photos. From that starting point, Bentley--the brains of the operation--maps out several steps. Sometimes you'll have to tail someone. You'll spend a lot of time picking pockets for keys. Some episodes require you to take out alarm boxes ahead of time. The way the game's levels all tie in to the main heist in some way is very cool, and it gives every single objective more meaning than it would have otherwise.

The heist itself is the end level and, if applicable, the boss fight of each episode. It's a longer mission than the rest, and you'll typically control all three of your characters at different times. Even though you've already done a lot of set-up work to make the heist possible, the heist levels are still packed with a lot of different objectives. In one heist, Sly has to distract an entire ballroom while Murray, attached to a winch, lowers himself down, saws the wings off of a statue, and makes off with them. Sly distracts the members of the ballroom with his dancing skills. So you're controlling Sly here while playing a little timing-based dancing minigame in the background. You see Murray putting in work, and once he gets out with the wings in tow, control switches over to Bentley, who covers Murray's escape from the complex with a remote-controlled helicopter that has the ability to drop bombs. It's an elaborate, amusing, and memorable sequence.

Other heists play around with time a little bit. In one instance, Sly hands off the keys to a repair truck to his posse. You then run Bentley (Murray follows behind automatically) over to the truck. Time then quickly rewinds back to the handoff, but now you'll play as Sly to make your way to the top of a sign to catch the grappling hook that's being fired from the repair truck. This sort of cooperative single-player gameplay comes across incredibly well. It's inventive, exciting, and gives you a real sense of teamwork between the three characters. The capers are varied and entertaining, and they create a great payoff at the end of every episode.

The structure of Sly 2 is really impressive, but it's offset a bit by the game's relative ease. Chalk it up to making a game that's fun for the whole family, but platforming veterans will master the game's light stealth mechanics--which roughly boil down to staying out of the beam of flashlights and spotlights and sneaking up behind guys to take them out--almost immediately. The boss battles follow pretty simple patterns as well. The lack of difficulty robs the game of some of its lasting value, because there aren't any real reasons to go back through a level once it's completed. Still, Sly 2 is definitely longer than the original game. Players should be able to get through the story in around 20 hours, though that number increases if you want to take the time to both collect enough coins to buy every extra move and find all 30 clue bottles in every episode. The game makes the most of your time by packing in a lot of varied gameplay, which includes such activities as turret-shooting, controlling vehicles, and the aforementioned dancing minigame.

The original Sly Cooper was very impressive from a visual standpoint. The game used cel-shaded graphics to give the experience the look and feel of a Saturday morning cartoon. Sly 2 uses the same look and has the added bonus of a more stable and usually very smooth frame rate, though you'll still notice a few drops here and there. Sly 2 also still has a great look to it, though with so many cel-shaded releases between the two games, it's maybe not as instantly amazing this time around. However, the character movement and overall visual design are all top-notch. Murray's wrestling getup is funny and fits his over-the-top character very well. Sly moves in a very stealthy way, while Bentley always looks appropriately awkward, considering the character's general lack of confidence in the field. All of the characters, from the run-of-the-mill guards to the game's boss criminals, have been created with a real sense of style. Simply put, the game looks very cool.

That sense of cool is further heightened by Sly 2's soundtrack. The music fits the big heist nature of the game very well. It's also a little interactive, so you'll get things like little string plucks to accentuate every footstep when you're trying to slip past an enemy. The music picks up when you're fighting and fades back when you're hiding out. And the superb music meets up with similarly great sound effects and voice work. The voices in the game are mostly great. Bentley, who serves as your guide and instructor whenever it comes to explaining your objective, stands out in particular, though Murray and Sly are also well done. The writing is also stronger this time around. The first boss you encounter, a lounge lizard named Dimitri, has a thick European accent, which he uses to butcher hip-hop slang in a really funny way. The voices and the script flesh out the game's characters--both good and bad--very well, and this helps keep the story interesting.

Overall, Sly 2: Band of Theives is a great game that will certainly please fans of the original, as well as fans of 3D platform games in general. It's also an excellent game for younger players. The varied gameplay, well-constructed story, and excellent graphics, sound, and music all come together to form an experience that most anybody would enjoy. 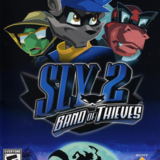 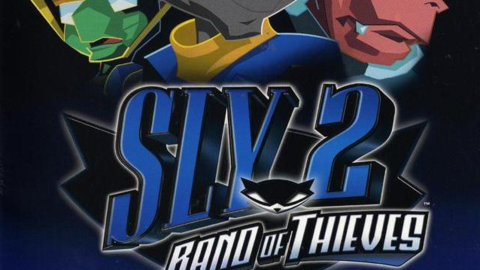 The varied gameplay, well-constructed story, and excellent graphics, sound, and music all come together to form an experience that most anybody would enjoy.