The survival horror genre gets another gem in the form of Slender: The Arrival, one of the most terrifying games in recent memory.

For years, conventional thought has said that the survival horror genre is on the decline, if not dying outright. As classic bastions of slower, more psychological play drifted into twitch gameplay and heavy commercialization, more and more independent games have managed to keep vigil for those who appreciate genuine terror. Slender: The Arrival is the latest game in this modern revival. Built up from an elegantly distilled core of exploration and vulnerability, The Arrival asserts the brilliantly masochistic joy of fear.

Slender: The Arrival takes its name from a relatively new urban legend: the Slender Man. Created from whole cloth by an Internet denizen, this information age monster is a far cry from anything in the classical pantheon. His unique mythology and strangely broad appeal meant that it didn't take long for the eerie figure to make his way to video games. The Arrival's predecessor, The Eight Pages, was an exceptionally well-made proof of concept that became somewhat of a YouTube sensation. Thousands of people posted videos of themselves wandering through a foggy, mysterious forest searching for eight pieces of paper with only a flashlight to guide them. While a successful run took only about 30 minutes, that pure sense of helplessness in the face of an unknown threat became the foundation for this well-realized sequel.

Keeping the focus on weakness and exploration, Arrival expands on the ideas of the original with a basic story and the creative application of old mechanics. The game is broken up into five chapters, each with its own focus. You play as Lauren, a woman driving to see her friend Kate. Shortly before the events of the game, Kate's mother passed away. On Lauren's way to Kate's house, her path is blocked by a fallen tree. Committing the worst sin in horror stories, she continues the rest of the way on foot.

One of the first items you find is a flashlight. Pushing back the veil of darkness that looms over the area, it's the closest thing to a weapon you get. It has two modes, one that casts light over a large area but has limited range, and another that does the opposite. Together, you and your precious flashlight trek through five chapters, which include a house, an abandoned mine, and several wooded areas closely resembling the setting of the first game.

It should come as no surprise that the game's primary antagonist is the Slender Man. A really tall, faceless man, he often appears very close to you, causing the screen to become distorted. The warped screen rapidly becomes more violent the longer you look at him and the closer you are, making it impossible to safely examine the ghastly killer. That, combined with the dark, misty environments, keeps the fear of the unknown at the forefront throughout. Level design is equally oppressive, in the best possible way. The initial areas are large and open with plenty of places to run if the Slender Man makes an unexpected appearance. Tension is high, but there isn't much real danger. Later, however, particularly as you make your way through an abandoned mine, tight passageways and scattered industrial equipment limit movement. The faint echo of footsteps and moans makes it hard to pin down just where your pursuer will come from, which elicits panicked, frenetic play.

Unfortunately, as spectacularly as the claustrophobic design works in some areas, the effect of it is hampered by a few awkward controls. Most PC games use a single button or key to open or close doors. Slender: The Arrival, however, requires you to click doors and then flick the mouse in one or another direction. This also happens to be the only control in the entire game that you cannot change in the options menu. While it's easy to see that the designers were going for an immersive scheme, this unusual mechanic doesn't work well in every case, potentially causing you to scream and blindly mash at the keyboard. Thankfully, this is only a major issue in one part of one chapter, but it's frustrating regardless.

The Arrival is no technological triumph, though cutting-edge visuals aren't vital when everything is cloaked in a peculiarly pervasive darkness. Screen effects work as a clear indicator of danger, however, and are quite effective. Effects like motion blur enhance the disorientation when you're panicked, and are solid, appropriate inclusions. Together, everything works toward an amateur, Blair Witch Project aesthetic. Feelings of abandonment and being alone in the wilderness are powerful, and they are evoked here with finesse. Equally masterful is the sound design. The ever-so-slightly paranormal setting is matched by a surreal, atonal background hum. Footsteps and the errant rustling of leaves give you the constant feeling of being watched, even when nothing can be found, and each time you pick up a new clue, a new instrument enters the sonic landscape. This reinforces the malevolent atmosphere and ensures that even during the relatively few calm segments, you are never completely at ease.

At about two hours, the game isn't so long that the constant apprehension becomes tiring. There is a smattering of collectibles to help flesh out the backstory, but because taking extra time to search for them places you at greater danger, you must weigh narrative cohesion against survival. The lure of these collectables is subtle, but it adds value and keeps you from becoming too comfortable with the world. After all, if there were no real, tangible danger, the Slender Man would cease to be an effective monster.

As a sort-of myth born on the Internet, Slender Man is probably one of the first genuinely compelling monsters to grace pop culture in a long time. The related games and their variants and mods, as well as the stories and YouTube videos surrounding them, show the genesis of 21st century folklore. While a little rough around the edges, The Arrival is fascinating because it plays on modern fears through a modern medium. For that, it has managed to breathe new life into a genre once thought dead. Slender is not an experience you will soon forget, and at $10, is priced just about right for its short length. Just be sure to play at night with headphones for full effect. Good luck. 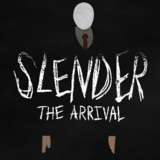