Sled Storm uses the SSX formula well, and anyone who enjoys a challenging arcade-style racer should have fun with the game.

For anyone who hasn't been following the development of Sled Storm for the PlayStation 2, in short, it's been quite a journey for the development team. When the game was originally shown, the visuals didn't really live up to the standards set by other games in the EA Sports Big lineup, such as the popular SSX. Based on initial feedback, the development team went back and redesigned the levels and the overall look of the game so that it more closely resembled the over-the-top feel of the other EA Sports Big games. The end result is level design that's done quite well, with tracks that have plenty of detail, shortcuts, and special effects. However, as good as the game looks, there are some noticeable deficiencies in the gameplay, including some of the most blatant rubber-band AI to ever be found in a racing game. But the basic gameplay mechanics are still good, and anyone looking for a tough challenge will certainly enjoy Sled Storm.

While there are time attack and single race modes, the main focus of Sled Storm is the championship mode, where you'll be able to unlock additional sleds, characters, and levels. You'll be able to select from three characters out of eight at first, with the other five becoming available later as you meet certain goals in the game. Each of these riders has different attributes and levels of skill in relation to the types of tricks they can perform. After selecting a rider, you'll select your sled. You don't have a choice at first, so your sled essentially represents the bottom of the barrel when it comes to performance, but again, you'll be able to unlock additional sleds later on by meeting certain requirements. The same selection process applies to the tracks.

When it comes time to race, you'll find that the basic controls are easy to use. You can accelerate, brake, and turbo-boost using the face buttons, and the shoulder buttons enable you to perform tricks. The one aspect of the game that's a little difficult to jump right into is the powersliding, which can play a critical role in the outcome of a race. Learning how to properly powerslide in Sled Storm can be aggravating because you'll often crash or unintentionally take dead-end routes, but what makes it worse is that the collision detection in the game can be a little spotty at times.

Normally, you'd expect a full-speed collision to cause a crash, but in Sled Storm that doesn't always happen. In fact, your sled rider will end up in some rather interesting predicaments as a result of the inconsistent collision detection. For example, in one of the earlier tracks, you'll be required to make a small jump across a chasm, but for some reason, your rider will occasionally cling to the wall and continue to drive at a 90-degree angle. In another situation, you may be going only a few miles per hour in the main section of the road, only to see your rider crash and fly through the air. It doesn't happen all that often, but when it happens just before the end of a race, the problem can prove very frustrating.

Sled Storm has another potentially aggravating issue, though it can significantly add to the challenge. The AI of the other riders in the game is purely based on the rubber-band model, where they will drive only as well as you're driving--if you're lagging behind, then they'll start to slow down. If you're in first place, then they'll be right behind you, waiting for you to make a mistake. This behavior can be found in plenty of racing games, but it's especially noticeable in Sled Storm, so much that sometimes you can sit the controller down for nine or 10 seconds without even moving the sled down the track, and you'll still be able to catch the leader. The reverse is also true. If you manage to have an ample supply of turbo and you successfully navigate through various shortcuts, a computer opponent almost always manages to sneak ahead of you--even when that same opponent was driving significantly slower when you were in sixth place.

Though this won't necessarily have a tremendous impact on your enjoyment of the game, it does have an effect on other elements of the gameplay. Like in SSX, one of the main concepts in Sled Storm is to charge your turbo (or "storm") meter by performing various tricks using different shoulder button combinations. It's a fun system that's applied well in Sled Storm, but for the first two laps, doing tricks or using the turbo isn't even necessary, because the computer opponents will always be hanging around, giving you a chance to get back into the race. Having an abundant supply of turbo never really seems to be all that beneficial, since computer opponents will always be right behind you regardless. These problems are nonexistent when you finally enter the third lap, because you'll want to take every opportunity to move yourself ahead of the pack, even if it's only for a second or two. There's no denying that this makes the game much more challenging than it would be otherwise, and indeed, that last lap will almost always be a nail-biter. If anything, it'll give you additional incentive to unlock better sleds for your rider.

Despite those problems, it's still quite fun to drive through Sled Storm's unique tracks, which become progressively more insane as you go through the championship mode. For the most part, Sled Storm looks a lot like SSX. Some of the tracks look as though they're straight out of SSX, while others have a much more vibrant and unique look, such as Polarfest, which blends elements of a deranged circus with those of various holidays like Halloween and Christmas. At one point, you'll even encounter a giant lobster. The tracks have been designed well, and you'll have access to plenty of shortcuts that become more difficult to maneuver through depending on where they place you on the track. Just from a purely graphical standpoint, there are plenty of details and special effects to look at, and the game manages to maintain a solid frame rate, though some of the characters and sleds seem like they could have used some more polygons. The split-screen multiplayer mode cuts down on the draw distance, but it also successfully maintains a solid frame rate.

Sled Storm's sound is pretty typical for a game of this type. The occasional commentary is performed by Mean Gene Orkerlund of WWF fame along with Matthew Lillard from the movie Scream, and while they repeat themselves often, they don't actually talk all that much to begin with. As far as sound on the track, you'll hear different noises when you're passing by different objects, which can be helpful in learning the layout of a track. The music is typical techno, which fits the theme of the game well, but there's nothing that'll particularly make you take notice.

Purists will undoubtedly become frustrated with Sled Storm's unrealistic AI and collision detection issues. But there are plenty of hidden sleds and characters waiting to be unlocked by reaching certain trick point totals or by placing well enough on a particular track. There's even an additional gameplay mode waiting for those who complete the entire championship. Ultimately, Sled Storm uses the SSX formula well, and anyone who enjoys a challenging arcade-style racer should have fun with the game. 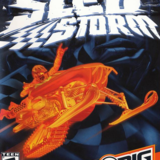 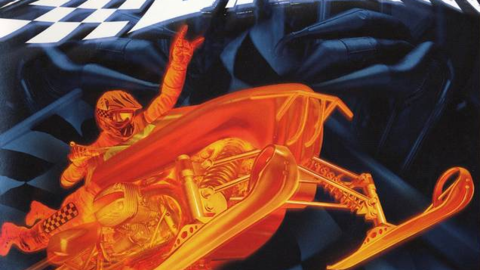 For any gamer looking for a uniquely fresh adrenaline rush, Sled Storm makes for one very worthy purchase.