SkyDrift is an arcade airplane racer that focuses all of its energies on the familiar trappings found in games like Mario Kart Wii and Hydro Thunder Hurricane; power-ups, multilayered tracks, and loose arcade controls are the game's defining characteristics, and it makes the most of these tropes. It's not particularly original, but if you're in the market for a good-looking, simple arcade racer that's fun to play online, SkyDrift fits the bill just fine.

At the heart of SkyDrift are three race modes: Power is standard racing with both offensive and defensive power-ups enabled; Survivor is an elimination-based variation on Power that removes whoever is in last place at timed intervals; and Speed replaces power-ups with glowing rings that provide your plane with a brief boost. These modes are scattered across the main single-player campaign, which places you in stages that get progressively harder as you advance, with new planes and paint jobs awarded along the way. All of the modes are enjoyable, but they become fairly repetitious before too long--the game would certainly benefit from having a few more race types to add to the variety. There are six tracks (plus reversed versions of each) set in different locations. The surrounding environments for each track range from the mountainous to the glacial, and they're all visually striking, with impressive levels of detail. Annoyingly, though, SkyDrift's overly saturated lighting effects can sometimes be overbearing on the visuals, making power-ups and obstacles difficult to discern against the harshly lit backdrop.

Power-ups include the usual suspects, such as mines, heat-seeking missiles, and shields. Picking up two power-ups of the same kind upgrades their effectiveness, and it's also possible to trade in stored power-ups for small doses of boost. To a similar end, you can drift behind other planes and ride lower to the ground to gain even more boost. You can also use the right stick to "knife edge" the plane so that you can weave through tight crevices and gaps that would otherwise cause you to crash instantly. Even when you do crash, though, respawns are quick enough that you don't lose much time. Because tracks are awash in sharp corners and sudden hairpin turns, the high-speed nature of the game ensures that you're considerate of your every action--when you mess up, it's usually your fault and not the game's. SkyDrift's tight controls and multitude of power-ups let you approach mid-race situations with the kind of sudden tactical initiative that can either help or hinder you, depending on the decisions you make. That said, it's a shame that none of the power-ups are particularly creative--it would have been nice to see more-expressive weaponry beyond generic rocket launchers and machine guns.

Beyond the single-player races is lag-free online multiplayer, which is really the shining jewel of SkyDrift. While the multiplayer cannot be played locally, all of the aforementioned modes and tracks can be played with up to eight players online, and the host retains complete control over map settings and the choice of planes before races begin. Despite the competency of the AI in the single-player portion, the game becomes infinitely more enjoyable when real people are thrown into the mix. Power-ups are well balanced, and no one plane is more likely to dominate than any other, meaning that every competitor is treated fairly, regardless of skill level. A host of criteria-based badges and medals can also be earned throughout both single-player and online matches, which is a nice touch that neatly ties in to the game's achievements and trophies.

If you've ever played an arcade or kart racer before, then you have a good idea of what to expect from SkyDrift. It does nothing that hasn't been done in the past, nor does it outperform any of its contemporaries in any meaningful way. Thankfully, solid controls and a strong dependency on tactics mean that SkyDrift still manages to offer up a good amount of fun in spite of its derivative makeup, especially when played online. 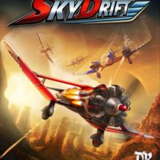