Skulls of the Shogun Review

Catchy turn-based mechanics and a great sense of style make Skulls of the Shogun a good, accessible strategy game.

Turn-based strategizer Skulls of the Shogun may be most notable for its cartoon-creepy graphics and hilarious sitcom dialogue, but the best part of this game is its strategic accessibility. This Xbox Live Arcade game generates fast-moving action geared to instill a constant craving to play just one more turn in the afterlife of a medieval Japanese warrior. This isn't the deepest strategy game, but catchy mechanics and an undeniable sense of style carry the day and make Skulls of the Shogun seriously appealing.

Story and setting are the most impressive qualities of Skulls of the Shogun. In the single-player campaign, you take on the role of the recently deceased General Akamoto, a heavily mustachioed warlord who has been sent to the land of the dead by a backstabbing underling named Kurokawa. Said betrayer somehow manages to fall on his own sword right after the assassination, however, which results in both characters continuing their feud in the afterlife. Akamoto hits the shores of the dead only to discover that Kurokawa has impersonated him and locked the doors to paradise. So cue the big war in heaven, which in this case is a cartoony land that crosses Japanese mythology with the doodles on a goth girl's Trapper Keeper. All the characters are little warriors with big skull heads, which gives the game a distinctive look. This, plus fantastic dialogue loaded with (good) sitcom-style jokes and a soundtrack of eminently hummable tunes, makes death seem rather cool.

The strategic mechanics are similarly appealing, and the basics are simple. You proceed through the land of the dead one mission at a time, starting at the coast and continuing through chapters set in regions based on the seasons. So you venture into a spring land loaded with cherry blossoms, a steamy summer jungle, a golden autumn forest, and snowy winter tundra. Each land features a handful of turn-based scenarios where you wage war with enemies for the right to move on. Battles are conducted with small groups of units that consist of just three main types--infantry, cavalry, and archers--that rely on the usual rock-paper-scissors formula.

Lands also come with special monk units that boast magical abilities. So you can recruit fox monks to heal troops, salamander monks to light foes on fire, and crow monks to blow baddies away. Additionally, terrain has an impact on battles. Rice paddies and shrines can be haunted to build more units, and troopers can eat the skulls of defeated enemies to increase skills and hit points.

All of this leads to interesting, well-balanced combat. Units can hide out in bamboo, making it harder for enemies to hit them. This can be a great way to discourage attacks or to tuck away archers to better allow them to perforate the opposition. Cavalry can charge into foes positioned by water and hurl them into the drink for instant kills. Cavalry are also handy to quickly scout terrain and scare up the power-up potions spread around the countryside. Infantry are best at forming spirit walls to protect their arrow-shooting and horse-riding buddies. Units can be knocked into terrain hazards like spiky bushes for extra damage.

Upgrading units with skulls is a huge plus, albeit one that requires you to prioritize. It's always a question of who should be doing the eating. Your general gains demon form and an added attack with his third eaten skull in a level, although sometimes you can't afford to do this because of a need to heal grunts with skull snacks. Losing the general means instant failure, though, so deciding what units to feed to feed--along with deciding when to risk sending the general into the fray--is a tricky balance.

Tactical choices are a factor when it comes to building your Skulls of the Shogun army. You can add to your forces on most maps, but it comes at a cost. Units have to waste a turn to occupy rice paddies by haunting them. This establishes a steady income of 25 rice per paddy per turn going forward, but the haunting turn leaves the unit unable to counter enemy attacks. Rice is then spent on standard units at soldier shrines and on monks at dedicated shrines, but again, you have to assume control of units first via a haunting. Enemies can come in after you with hauntings of their own and wrestle both rice production and shrines away from you, so you have to balance the need for acquiring and holding territory with the ever-present desire to wipe out the enemy.

Challenge isn't much of an issue, however, at least at normal difficulty. Enemy artificial intelligence is good, but it doesn't have a "go for the throat" attitude. Enemies often waste turns munching on skulls when their time would be better spent on all-out attacks. That said, you don't want to take them for granted. Expect a cakewalk, and you can guarantee a nasty surprise at some point, like seeing your general get knocked into the water and killed by a cherry-picking AI. Some of the challenge is actually provided by the visual design, which has been drawn up with good looks in mind over functionality. Units are too big for the map, thanks to their huge skull heads. Large dialogue balloons get in the way, too. The result is a cluttered screen that can obscure unit position. You can zoom in for a better look, but you have to do it constantly to keep an eye on everything, and this makes battles drag.

You don't need to utilize every option to beat the campaign. You can win battles without using terrain, for instance, and monks can be ignored a fair bit of the time in favor of tank-rush assaults with regular troops. You can do great things with them and their spells, but they're not necessary to win battles all the time, which might lead you to adopt a "why bother?" attitude. Mission goals are often too straightforward. The missions where you can win by killing an enemy general are often easy, since you can take him out with some suicide attacks by cavalry and archers, followed by a blitz from your own general after a brief pause to power up with skulls. The next level always resets your army, so you can sacrifice men with no worries about hurting yourself going forward.

Multiplayer is offered, with support for four players both online and off, although the only modes of play are deathmatch and team deathmatch. Technical highlights are interesting: cross-platform support lets you play matches against other strategists across most contemporary Microsoft products. You can play on the Xbox 360 against somebody playing on a Windows phone or a Windows 8 Surface tablet. The game also boasts a Skulls Anywhere mode, where players can take turns independently of each other whenever they have a chance to get in some playing time. And there is cloud support for saves, allowing you to transfer multiplayer matches and campaign progress to multiple platforms…as long as you buy the game on those platforms, of course.

Skulls of the Shogun is a light entertainment that remains enjoyable for just about every minute of its six- or seven-hour life span. The strategy offers just enough depth to keep you interested, and the cartoonish story, setting, and dialogue are whimsical and engaging. You get your 1,200 points' worth and then some in this enjoyable trip to the lands of the dead. 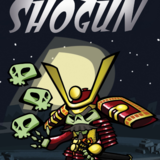 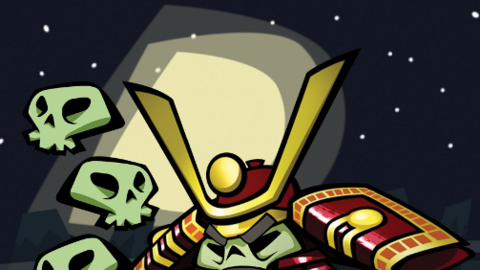 Skulls of the Shogun

Washing up on the shores of the afterlife, you meet and join forces with vibrant ghost-samurai warriors, magical animal monks, and mustachioed samurai generals on the way to capture Skulls of the Shogun.