Despite some shortcomings, Siren: Blood Curse is an enjoyably creepy adventure with some interesting gameplay mechanics.

Once upon a time, survival horror games were defined not only by shambling corpses and creepy atmosphere, but also by protagonists that moved with all the grace and agility of a Sherman tank. Things have changed since then, but at first glance, Siren: Blood Curse, a horror game now available for download on the PlayStation Network, seems almost willfully behind the times, with play control that feels clunky and outdated. However, if you bear with the game and give it a chance to show off its strengths, you'll find that its episodic presentation, chilling ambiance, and terrific use of the Siren series' signature sightjacking system come together to create an enjoyably frightening experience.

Blood Curse returns the series to the doomed village of Hanuda, the setting of the original Siren. The game takes place in August 2007 and begins with an American television crew arriving in Hanuda and stumbling upon a horrifying ritual involving human sacrifice. Things only get worse from there. It quickly becomes apparent that virtually everyone in the village is a shibito, a corpse person. These shibito are more unsettling than your run-of-the-mill mindless zombies because even in their gruesome, decaying states, they maintain a shred of their human identities. Shibito farmers still till the land; a shibito cop patrols the town; and a young shibito girl spends time in her room drawing, producing nothing but mindless scribbles. The game's story twists and turns back on itself repeatedly, weaving a narrative that some will love analyzing but others will find needlessly baffling. The story's best asset, though, is in its cast of seven playable characters, a good assortment that includes a vulnerable 10-year-old girl, a brave high school student, and a mysterious, cool-as-ice Japanese doctor.

Unfortunately, Blood Curse makes a poor first impression. The graphics aren't very impressive from a technical standpoint and the incredibly short first episode puts you in one of the darkest areas in the entire game. You immediately learn that your characters control stiffly and that combat feels slow and unresponsive. At first, the game feels a bit like a relic of survival horror's past, with the one concession to new technology being the frequent, frustrating use of vigorous controller shaking as a gameplay mechanic. Whenever you're knocked down, you'll need to shake the controller wildly to get up and escape with your life. It quickly becomes tiresome, and you'll soon long for the good old days when you could just pound on a button as quickly as possible to get back on your feet.

Despite these shortcomings, Blood Curse eventually develops into a compelling, compulsively playable game. The biggest reason for this is the novel implementation of the sightjacking system. Sightjacking is the ability to see through the eyes of any other character, and it's vital for sneaking past patrolling shibito that are deadly when you're unarmed. Pressing L2 puts you in sightjack mode. While sightjacking, you can manually search for targets by using the right stick, which is similar to hunting for elusive radio stations on the dial, or quickly and easily cycle through possible targets using L1 and R1. The screen splits and displays the viewpoint of the current target on the right. You can assign up to three viewpoints to different buttons and lock on to one particular view, which is displayed on the right as you continue moving.

The game also has a mind of its own when it comes to sightjacking; if there's a shibito stalking or pursuing you, it will often automatically present its viewpoint on the right for dramatic effect. Sightjacking is crucial for getting through the game's stealth sections, and at times, it's also useful for revealing important clues, such as the location of a key you might need to progress. But it isn't just an interesting element of the gameplay. It also contributes significantly to the sense of horror and dread that permeates the game. It's quite terrifying to see a shibito's gaze linger on a closet where you happen to be hiding or to see yourself running for your life through the eyes of the shibito that's right on your tail.

Siren: Blood Curse's episodic structure also keeps things engaging. The game is divided into twelve TV-style episodes, and each comes complete with a quick recap at the beginning and a preview of the next episode at the end. Each episode, in turn, is divided into chapters. No single chapter is very long, so you're constantly jumping from one character to another and from one gameplay style to another. In one chapter you may be alone, armed, and able to handle yourself in a fight, while in the next you may have to escort another character to safety, or avoid contact with the enemy altogether. Stealth and escort missions are elements that could quickly drag a game down, but by constantly changing things up, Blood Curse keeps things moving at a steady clip.

The game also keeps you on a short leash. Objectives are always updated to tell you exactly what you're supposed to do next, and there's usually a handy icon on the map that tells you exactly where you need to go to do it. This doesn't mean that every objective in the game is an easy one, and in fact, there are some checkpoints you'll undoubtedly have to attempt multiple times before you succeed. But always knowing exactly what you're trying to accomplish--even if you're having trouble accomplishing it--keeps the game focused and free of aimless wandering. Although some chapters seem to end before they even begin, the constant shifting of characters and objectives will motivate you to keep playing just to see what the next episode brings.

What the next episode probably won't bring is a location you haven't seen before. Throughout Blood Curse, you see the same few locales over and over again. The locations themselves are fine, and some, like a town square that's been flooded with blood-red water, are especially memorable. But by the fifth time you have to pass through the same area, you'll start to wish that there were just a bit more to the village of Hanuda. This would be a really glaring issue in a full-price retail release, but it's somewhat easier to swallow when you consider the game's downloadable release and $40 price point. There just isn't quite enough to Blood Curse to warrant a full-fledged release, but it's a good fit for the PlayStation Network.

Technically speaking, the graphics aren't particularly impressive. There's an omnipresent fog, which means you're never able to see all that far ahead of you, and even the character models for the living, breathing humans have a lifeless, zombielike look to them. Also, while some animations, such as those that accompany the dealing of a severe blow to a shibito, are intense and satisfying, others are poor, like the way characters just plummet straight down when walking off an edge. The mood that the game's visuals create is what's most important, though, and in that regard, the presentation works. Everything about the village of Hanuda is grimy, decaying, and oppressive. There's a grainy, flickering quality to sightjacking that makes it seem as if you're tuning in to a weak, distant television station.

The sound design is outstanding. The voice acting by the main cast is very good throughout, without any sign of the hammy overacting that you so often hear in horror games. Adding to the suspense of the game's stealthy moments is the way a heartbeat sound effect pulsates when enemies are near, each beat accompanied by a vibration in the controller. The music is creepy, too, but it's the disturbing voices of the shibito that will really send shivers down your spine. Particularly chilling is the way the voices of any sightjacked shibito resonate--as if you're hearing them echo inside your own head.

Each of Blood Curse's 12 episodes will probably take you about 30 to 45 minutes to complete, so it isn't all that long of a game. However, those of you who really want to get to the bottom of the story will find some replay value in going back to find each of the game's 50 archive items, each of which sheds a bit of light on the village, the characters, or the events of the game. The surprisingly small number of locales, along with the short running time and the awkward controls, would doom a lesser game to failure. But Blood Curse, with its great use of the sightjacking mechanic, is an unusual game that finds an unusual, terrifying kind of success. 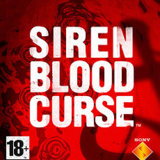