Sir, You Are Being Hunted Review

The Ghost and the Doldrums.

The English literary critic Sir Arthur Thomas Quiller-Couch posited that there are only seven basic conflicts in fiction when you get down to it: man against man, man against nature, man against himself...and so on and so forth in that fashion. Call them the kindred spirits of well-worn video game terms like player versus player and player versus environment. They're a little anthropocentric, sure, but all that man versus this and man versus that does get across one thing: man has a tendency to pick fights with pretty much anything. Still, Sir Quiller-Couch never quite made it to man against robot. That's an archetype left to be explored by more contemporary Brits, like the development team of Big Robot, maker of Sir, You Are Being Hunted.

The protagonist is trapped on a randomly generated archipelago that's one half British moor, one half otherworldly hellscape. He might be an aristocrat, or perhaps a cook or inventor, with a scant few survival resources to his name. Whatever his profession of choice, he has managed to run afoul of some dandified local robots intent on mounting his head on their cigar room wall. In order to escape, he needs to track down 17 remnants of the device that transported him there, and return them to a centrally located set of standing stones.

How to best categorize the experience? If we were to follow Quiller-Couch's lead, breaking the video game medium into its essential permutations, our lowest common denominators might be those games that cast their players as predators, and the narrower swath that casts them as prey. Sir, You Are Being Hunted is nominally one of the latter. Its "tweedpunk" robots wear top hats and sport double-barreled shotguns, and by all outward impressions are ready to pursue "the most dangerous game." So you'd be forgiven for any visions of baying robo-hounds on your scent or Cylon-eyed trackers inspecting the footprints you've strewn across the English moor. But in Big Robot's take on the manhunt, the hunted becomes the hunter faster than you can say "They drew first blood."

On some level, that sort of shifting power dynamic is to be expected. Stories about hunts are often stories about comeuppance, whether that means Charles Remington getting mauled by lions in The Ghost and the Darkness, or whatever happens to Jurassic Park's Robert Muldoon after he says "Clever girl." But it doesn't take much to flip that switch in Sir, You Are Being Hunted. Just a chance discovery of a weapon (or the selection of the officer class, which comes with its own firepower), and then you're the predator, stalking your prey and waiting for an opportune moment to cave in a straggler's metal skull. That's not to suggest that there's much punch to Sir's combat, though. There are only a couple of same-ish weapons on hand, all unwieldy. And the idea that these robots deem you beneath them on the food chain belies the fact that their artificial intelligence isn't anything to write home about, either. They're easily baited away with a thrown bottle or lured into a bear trap by the ringing of an alarm clock--the long and short of the stealth systems on offer.

You could avoid them almost entirely--most of the robotic hunters seem content to simply wander the islands at random, rather than actively search for you--except for the little matter of your exit strategy. That is, the 17 fragments of your transporter that have been cast to the four corners of your procedurally generated world. You can carry only so many at a time (even more than one is a risky venture when death sets you back to before you pocketed them), so you're stuck perpetually circling back to the center of the map to offload them. It's an objective that throws the natural vectors of the chase into disarray; what might otherwise be a more direct flight from danger becomes the looping, meandering path of one of the kids in a Family Circus comic, to and from the standing stones, trip by agonizing trip. Compounding the matter is that the fragments are typically guarded by bots that have to be dispatched by hook or by crook. When you're crouched in the tall grass, weighing the unsavory options of Sir's stealth and combat systems on either hand, you don't feel much like prey.

If only the grass looked a little nicer, perhaps all the time spent staring at it up close wouldn't wear on your patience. Sir, You Are Being Hunted's procedural island generator doesn't seed the landscape with much meaningful variety--even for English swamplands--and the foliage you spend most of your time huddled in is terribly rudimentary. Buildings, for their part, function only as crates, to be clicked for a pop-up menu displaying their contents. Strangely, the underbaked aesthetics often lend the islands an uncanny, haunting appearance, especially at night when shadows change their cast in bizarre shifts, and the moonlight shines on blocky textures that look like they were run through a randomized Photoshop filter.

Of course, with all the random asset generating that's going on underneath Sir's hood, it's only natural that the stars do occasionally align. The subdued British humor of the items you find usually paints by the numbers, but once in a while you happen upon a playable trombone or something equally irreverent, and all's well for a while. The robots, for their part, are delightful contradictions that intone Anglicisms and serve commendably as both cold, calculating sentinels and prancing, mustachioed fops. When you err enough to have to wait out a few passing groups, and their patrols veer toward your hiding place, the tension certainly ramps up.

But those rare moments aside, the essential elements of Sir, You Are Being Hunted--the conflicts between man and machine, between hunter and hunted--aren't getting their due. Here is a game that wants to tell a basic story, but that's left too much space between its opposing forces to make them duel. 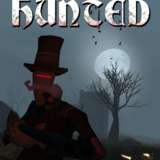 Sir Nick Capozzoli spent a dozen hours with Sir, You Are Being Hunted as a curiously savage aristocrat, and dabbled with a few of the alternate classes on hand.