Rebellion is the best way yet to experience the strategic joys of the Sins of a Solar Empire franchise.

Sins of a Solar Empire reaches new heights with the stand-alone expansion Rebellion, which is the best way yet to play this 4X space real-time strategy game. Developer Ironclad Games hasn't reinvented the wheel, choosing to tweak the four-year-old franchise's fundamentals instead of tearing things up. This results in an ingeniously refined new experience that leans on a number of adjustments and additions to features like victory conditions, ship classes, and even the graphical engine. All of this fine-tuning of the feature set doesn't quite warrant the $40 price tag (although owners of the previous games in the series can qualify for a $10 break), but for that cash outlay you get a greatly modified version of a classic RTS game that will keep you forging galactic empires for many hours.

Virtually all of the material in the original Sins of a Solar Empire and its previous Diplomacy and Entrenchment expansions is front and center in Rebellion. Gameplay remains focused on building a space empire in the far future through constructing massive battle fleets, colonizing planets and asteroids, gathering metal and crystal resources, stuffing the bank account full of credits, engaging other species diplomatically, and even spreading your culture across the spaceways like some kind of interstellar Roman Empire. The user interface is still terrific, allowing you to keep balls in the air without everything crashing down due to an excess of information.

The heads-up display looks a little cluttered, especially the left side of the screen that tracks vessels, but it lets you avoid micromanagement hell. The main drawback in the core feature set is the continuing absence of a campaign, so you're stuck playing one-off skirmish matches against AI opposition or human players in the online and LAN multiplayer. These skirmish scenarios can take many hours to play, however, depending on the size of the map you select.

While the core of Rebellion remains familiar, the gameplay has been stretched in significant ways. The three races of the earlier Sins games--the Advent, the Trader Emergency Coalition, and the Vasari--have been expanded to six with the creation of Loyalist and Rebel factions for each group. All are tricked out with new capital ships and unique tech. This isn't the typical expansion where each side gets a handful of new ships and guns. There are radical changes here. Vasari Loyalists, for instance, have a hate on for pretty much all other races, and can eat planets. The Vasari Rebels, on the other hand, are more easygoing when it comes to buddying up with other species, and they specialize in nanotechnology.

TEC Loyalists are all about defense, with cheaper starbases and the ability to deploy two of these behemoths around planets, while the TEC Rebels are all about conquest and can ally with pirates and neutrals to go on the offensive. Advent Loyalists are aggressive mind-controllers out to assimilate enemies, whereas Advent Rebels are a little more on the spiritual side and can revive destroyed ships. So you get a lot of replay value courtesy of the many differences in how each faction takes to the stars.

Extra ship types are some of the best new feature in the game. Massive Titan-class battleships unique to each faction can now be constructed as counters to enemies who might be turtling with starbases, minefields, and gun platforms. Titans are supremely useful when you want to assault a barricaded enemy system. This greatly aids in eliminating the drawn-out endgame that was sometimes a problem in past Sins games, with fleets endlessly smashing into one another in an effort to break defensive logjams. Titans also play into the distinctiveness of each faction. The Vasari Rebels' Kultorask Titan uses the group's nanotech to bleed power from enemy ships, for example, while the TEC Rebels' Ragnarov Titan is a huge rail gun that can shred enemy fleets with targeted and splash assaults.

Despite all of their abilities, Titans are not overpowered. You need to research a lot of tech to enhance their weaponry and damage capability, and move them up in level before they hit their full potential. Even then, Titans need allies, or enemy fleets can whittle them down to nothing. New corvettes, again unique to each faction, are another solution to smash-'em-up battles. Instead of being head-on attack craft, corvettes have the ability to cause damage to foes in more subtle ways, such as by slowing enemy ships, causing them to sustain more damage, or bogging down their repairs. Deploy them smartly, and you can turn the tables in battles even when you're outmanned and outgunned.

Artificial intelligence remains impressive. Enemies tend to be aggressive when they need to be and hold back when necessary. The AI isn't perfect, however; you can sometimes draw enemies into attacking before they might be ready by sending a smaller force out to stage a hit-and-run before falling back to a heavily fortified planet with the bad guys in pursuit. This usually results in a full-on assault, which can be played in your favor if you're sitting back with a Titan, some carriers, a few other capital battleships, and a load of cruisers and corvettes just waiting for the enemy to warp in. Otherwise, expect to be challenged early and often.

New victory options also add variety to matches. Where before you had to win through domination (basically obliterating all rivals) or through diplomacy, now your empire can soar to success based on numerous objectives. These conditions further break up late-game stalemates and give players with different tactical preferences the ability to win games without leaving their comfort zones. For instance, the less aggressive can go after diplomatic or tech victories. Warriors can now win without destroying everything in sight, courtesy of new victory conditions that give wins to the faction that annihilates enemy capital planets, occupies a hidden world guarded by a neutral AI fleet, or takes out powerhouse enemy flagships.

You can also win by simply being allied with a faction that fulfills one of the victory options. All six options can be turned on before launching matches, or you can pick and choose which ones you want. A lot of new flavor has been added with the victory options, so much so that you can't imagine going back to plain old regular Sins after messing around with them.

Visuals have been updated as well, although the general look of the game is the same as it has always been. Everything looks good, but a little dated, as you might expect from an engine that's going on four years old now. The enhancements do result in some epic space battles when zoomed in close, though. Watching colossal engagements is a thrill, especially when you turn off the UI and just watch the spectacle unfold. The engine overall runs smoothly and allows for battles with hundreds of ships onscreen simultaneously without any noticeable slowdown. The exception: occasional frame rate hiccups when zoomed in very tight on capital ships taking and giving heavy beam-weapon fire. Audio effects and music remain the same as before, meaning that you barely notice either, aside from occasionally being annoyed at the limited number of order acknowledgements.

Rebellion puts a nice capper on the Sins of a Solar Empire franchise. While this is an excellent game, with loads of new options and an incredible amount of tactical depth, it does show the age of the series. It's hard to imagine the Sins games progressing without a more serious overhaul to move the next release into full-blown sequel territory. Until that game launches, however, you can get your space-empire fix from this outstanding stand-alone expansion, which contains enough ways to conquer a galaxy to tide you over for a very long time. 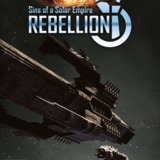